Erza, a LARP character, introduces himself to the camera. “I’m very pleased to meet you all,” he says, “I hope we have a great time together as a community. I heard a lot of good things about S.M.I2.L.E., lots of nice people, heard you all like music… techno.” Erza smiles, clicks his tongue, and then says, “Let’s go!”

His brief cameo catalyzes a dive into the rabbit hole that is “S.M.I2.L.E.- A trip into Synesthesia”, the latest film by Omsk Social Club, an anonymous group of artists who are best known for incorporating Live Action Role Play (LARP) and Real Game Play (RGP) in their “crypto-raves”. These events take place across Europe in warehouses or at art institutions—and you have to mine cryptocurrencies as a prerequisite to attend. After successfully using some of your computer’s processing power for mining cryptocurrencies, Omsk Social Club will assign you a fictional character and storyline that you are expected to LARP (role play) throughout the rave–which sometimes lasts for an entire weekend.

Euphoric traditions in ritual and raving form the basis of Omsk Social Club’s post political expression—a momentary reprieve from our political anxieties. Rave culture’s origins are in the open acceptance and expression of underground Black and Latino gay scenes in Chicago and Detroit—often held in illegal venues like abandoned warehouses or in uncharted open fields. The trend later burgeoned into Europe, where the risk of getting shut down by authorities became part of the thrill.

While the rave is an inherently utopic state, Omsk Social Club—who prefer not to disclose their identities—reject an ultimately idealistic and unattainable utopic future: “The whole modern world is built on people trying to reach utopia. So how do we use that to make these speculative designs?” Rather than circumventing political discourse, Omsk Social Club suggests trying to “understand how you can participate in new models of politics.”

As with all role-playing, establishing trust is crucial before entering the real game play scenario. That’s why Omsk worked closely and carefully with participants for this new LARP design pre-S.M.I2.L.E. ceremony. Instead of requiring all participants to mine cryptocurrencies as a rite of passage, they repurposed crypto-jargon by asking them for a “distributed consensus” during a preparatory workshop.

For those unaware, a distributed consensus is what makes the technology backing cryptocurrencies a trusted decentralized network. Cryptocurrencies are not centralized and governed by one entity like a bank. Bitcoins, for example, are reliable digital assets because a mutual consensus is reached by all hosts within the network. Omsk reached this distributed consensus with participants before the ceremony based on “people’s energies, sensory deprivation, self divination, and the use of touch to find comfortable spaces of reading someone else’s body language,” which helped outline acceptable boundaries and incorporated individual expectations.

Rooted in ancient European pagan and alchemic traditions, a S.M.I2.L.E. ceremony is heavily guided by earlier encounters with rave culture. “Of course warehouse parties and raves were the first large-scale, ritualistic and ceremonial, community-led practices that we were part of,” an Omsk Social Club member explained, “We have to recognize there is a strong pagan and occultist history on our doorsteps. And in a sense, this ruined culture was never put to bed—it was just nestled between our subcultures.”

Even though the film is set in the future, it conjures a hauntological grounds for raving as a spiritual act—and returns to pagan and occult traditions from centuries before.

“Never forget the mind coils back to the birth of time,” for instance, is a phrase often recited by the group. Another LARP player in the film makes a dazed proclamation, “Rest in peace the 90’s, twenty years later, still the best music generation of its time.”

Omsk Social Club’s coming of age experiences with raves in Manchester, Glasgow and the Edinburgh quarries are built into the core of their game-play designs. What’s carried on from this formative time is how these remote countryside parties still depended on a close relationship with technology.

“You are completely isolated,” one member recounts, “But even in a quarry—in the middle of Scotland—you still need the generator, the rig system, a laptop, Ableton Live. These systems of technology move bodies, together and in symmetry.”  The Omsk member explains a sort of symbiosis: “[Society] always positions technology as external to the human. But digital technology has always been an extension of the human, a fabrication of reality, and another version, I guess, of spirituality. So, you begin to see the body as economies of ritual and collectivity.” 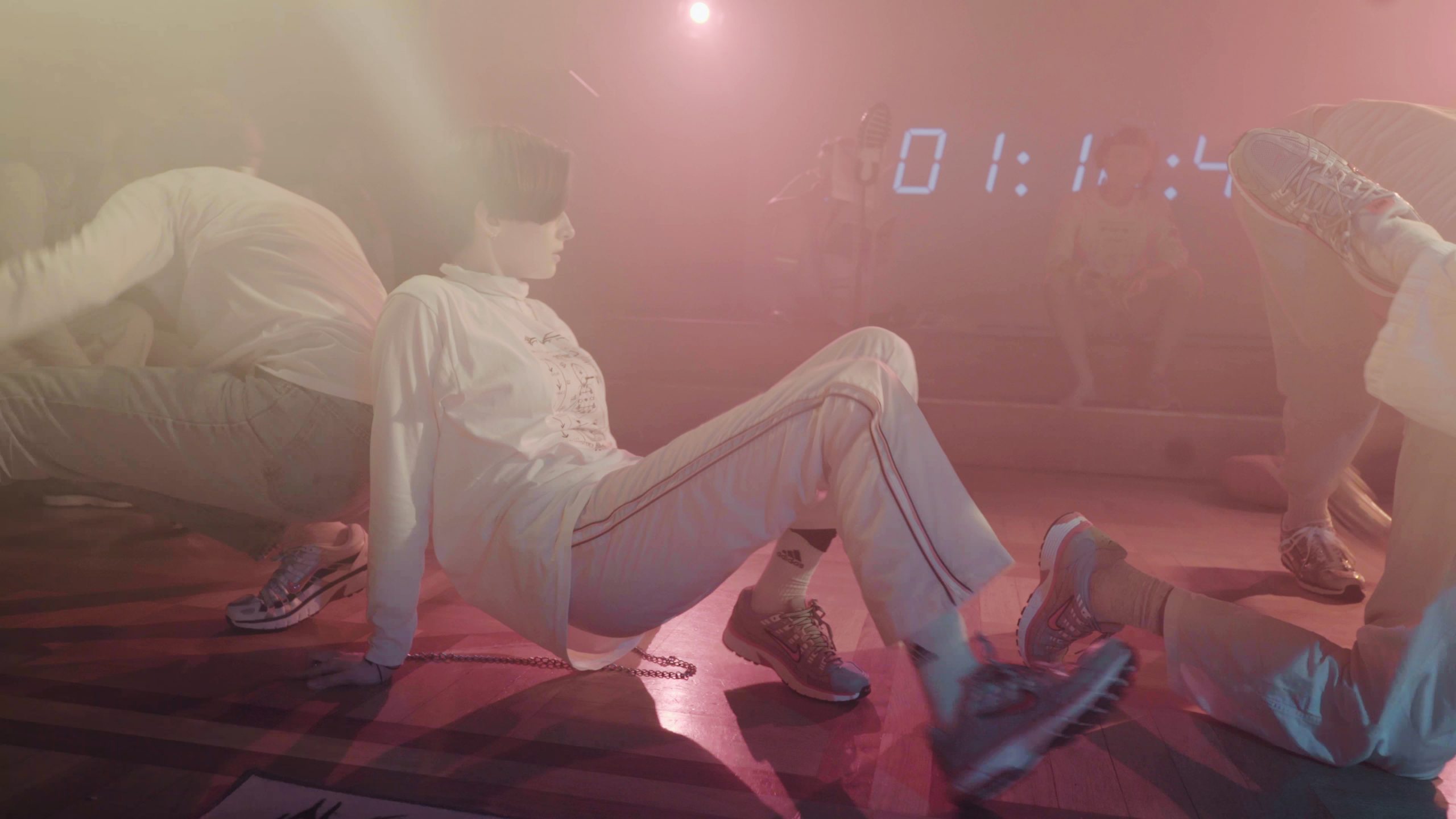 Originally, Technobodies curator Yvonne Seidel invited Omsk Social Club to LARP an imagined political upheaval — but the group was more interested in touching on Timothy Leary’s S.M.I2.L.E. prophecy as a system of play. Leary, a Harvard lecturer, hallucinogenic drug advocate and futurist, championed the introspective potential for psychedelics as a source for hyper-human performance and collective expansion of consciousness. S.M.I2.L.E. is his anagram for Space Migration, Increased Intelligence, Life Extension, and according to Omsk, it proves to be one of Leary’s prominent contributions to the 60’s psychedelic movement as a cornerstone theory for achieving higher states of consciousness.

Lysergic highs may have been the basis for Leary’s lifework, but that aspect isn’t as important to Omsk Social Club as much as the concept of rewiring consciousness. “Expanded consciousness, we would argue, can be reached without a drug and achieved collectively—through sound and movement. That’s something that we tried to show with the film,” another member says. “We often do a disservice to the expectations of the body. If we start rooting around in there, you can get the body to do fantastic things.”

“S.M.I2.L.E.- A trip into Synesthesia” works from a set of spiritual, ritual, and techno-paganist devices, alternating between new age expressions, like techno music and dynamic dance meditation, to, as they term it, bleed the self into one communal experience for enjoyment. It’s no different to the experience of mysticism at a rave, when an individual is fully immersed within a crowd of bodies capering to a four-four beat.

Omsk’s impulse towards utopian-adjacent escapism shapes their unique kind of post-political entertainment. By experimenting with play as a way to deal with our disappointing political climate, their work merges crossovers between long-established cultural phenomena and shared histories—creating and gaming the fictional realities “inside systems, within systems, within systems…” Omsk Social Club encourages the possibility to access multiple unlived realities that subvert society’s usual accelerating pace. In their simulations, they hope to uphold an idea of techno-human togetherness, fixed in a temporal state of euphoria.