2019 has not been a kind year to clubs in Berlin. Fan favorites Arena Club and Farbfernseher both announced their respective closures this year, and now you can add Prince Charles to that list.

Prince Charles is an upscale club located in Berlin’s Kreuzberg district notable for its warm Funktion-One soundsystem and bar housed in a drained swimming pool. Its musical program has long offered an alternative to the Berlin techno norm: parties like J.A.W. Family and Lumberjacks In Hell put the spotlight on American house and disco, with sets by the likes of Jamie 3:26, Moodymann and Theo Parrish.

The club announced the closure in a Facebook post, which you can read here. We’ve screencapped the post below. The club’s last party will be held at the end of the month. Following that, it will be redesigned into an event space called “Robe and Elan”. 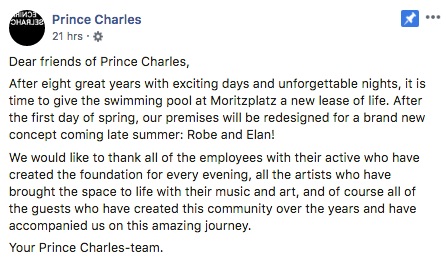