In Berghain’s experimental floor Säule, the mob is dancing ecstatically. Some freestyle at the front, while some close their eyes and meditate through their repetitive moves. They seem to temporarily have left the space. This past Friday night at CTM Festival, 3Ddancer, a trio of Berlin-based modular synth improvisors, set up in the middle of a dark concrete hall. The crew crouch over a desk full of chaotic cable spaghetti and blinking diodes on modular synthesizers. Colossal bass stabs thump through the membranes at a rapid BPM count, and the lead synths bubble up, as though they were channeling alien spirits.

Meanwhile, on Berghain’s main floor, Gabber Modus Operandi (GMO) rise to the helm. Known for their clash of traditional Indonesian and western club sounds, the Bali-based duo consists of Kasimyn, who likes to keep it low key and usually zones behind the decks, and Ican Harem, who climbs onto the stage hardware, his heavily processed voice clanging and echoing through the venue. Ican twirls his arms through the air and contracts his face to eerie grimaces while he stares down the crowd. In these episodes, he vigorously nods his head as if he was headbutting an imaginary counterpart. He is rumored to involuntarily vomit during his performances.

The geographical distance between 3Ddancer and GMO’s respective homes may span 11,500 kilometers, and they may be products of vastly different environments and lifestyles, however, hardness is a significant overlap in their repertoires. Last year, both contributed to Boiler Room’s “Hard Dance” series. 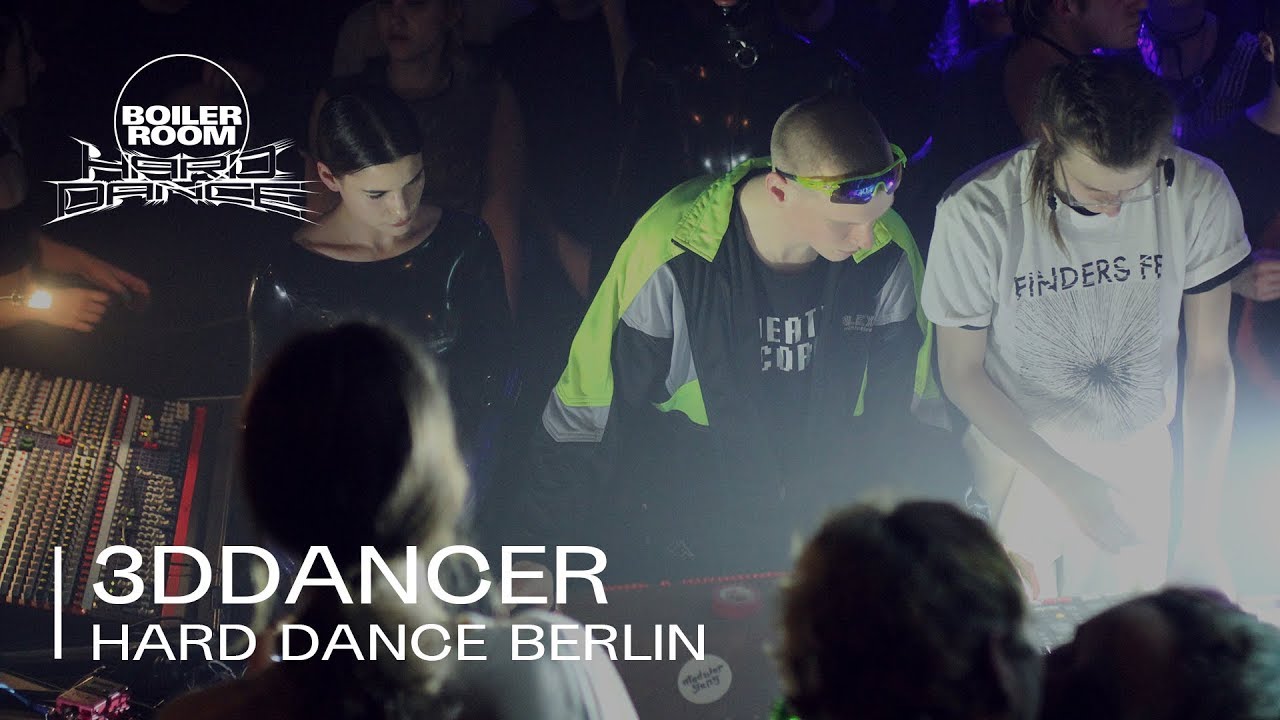 While 3Ddancer deploys hard music to soundtrack escapist club culture and protest against arbitrary, yet commonly accepted, musical constraints, Gabber Modus Operandi considers hardness as a mode of spiritual transcendence. The latter’s “rough, messy, and cheesy high energy mentality” leads them to compound their heritage with the sounds of gabber, hardcore, noise, and Chicago footwork.

For 3Ddancer, made up of members Alex the Fairy, Rachel Lyn, and Volruptus, “the rawness and instinct behind bold music is what really connects with escapists,” Alex explains. “Our lives are so caged within the safe operating parameters, that moving outside of that really seems to connect with people.”

What Alex speaks to mirrors research by German sociologist Niklas Luhmann. In his investigations within systems theory, Luhmann defines a social role as an accumulation of expectations on the self, induced by a situational environment that then limits the pool of possible behavioral options. The rave, for example, is such an environment. The broad spectrum of actions capable in the outside world reduces to a mere handful within its party confines: you may dance, talk, make out, or consume. In other words, the club is a primitive space.

This perhaps explains why club music is so stripped back and bold, so hard, and so uncomplicated. Within this genre, half bar-long rhythms can virtually loop throughout a whole track without the repetition taking away from its captivating effect. There are either stripped back harmonics–or simply no harmonics at all. Melodic content and tonality are also similarly restrained, meaning that the most minimal amount of musical elements makes up an entire electronic composition.

This uncomplicated approach to music-making, too, is another guiding principle for 3Ddancer. “For me, this project is a form of retaliation and rebellion against all things perfect,” Rachel explains. “[Our music is] not produced in a classical way, but this is exactly what I’m rebelling against.”

“Why can’t experiments and [errors] be [considered] intelligent?” Alex questions. He argues that the primitive logic of club music in the front end doesn’t exclude it from being rigorous or innovative, to which Rachel adds, “It’s about feeling and aesthetic rather than songwriting. I think songwriting is learned whilst aesthetic is more instinctual… rhythm is something that is inside us… not something we learn.”

There is no universal measure or fixed definition for hardness–and different pockets in the global music scene attribute different purposes to it. Kasimyn, for instance, says GMO aims “to maximize the character of home in our music. I’m always impressed with how gentle and warm a gamelan can be while being so hard and piercing. That’s why we write most of our tracks in the Indo-pentatonic Slendro and Pelog scales.”

Weaving in their heritage with the aesthetic of western club stompers, GMO form a valuable gateway for a global audience to engage with scales and rhythms they aren’t conditioned to. Tracks like “Sangkakala II,” full of frenetic energy and thundering, high tempo drums, are where Gabber Modus Operandi juxtapose their dual interest in “the sacred and the banal” and “the naive and the violent.”

Explorations of these dichotomies form the core of their GMO project. To this end, the duo draws inspiration from the traditional Indonesian phenomenon called Jahtilan, wherein they replicate tigers, monkeys, or the shadow puppets as a form of liberation. Also referred to as Kuda Lumping, Jahtilan is a group dance to gamelan music that induces a trance-like state in its spectators. Animalic or deceased spirits are said to possess the dancer, thereby also transferring supernatural powers. Sometimes, dancers demonstrate their invincibility by eating glass shards or allowing themselves to be run over by a motorcycle. This is to say, they ascend to a primitive state.

What hard music lacks in melodic intricacies and elegance, it makes up for by evoking ones primordial self. Yes, it doesn’t seem to require a creative mastermind to have a kick drum repeat intervals for a whole night. Yet this rhythm recalls the beating heart of a mother’s womb–another interior, like the club, which is bounded off from the social complexities of the outside world. In this sense, Gabber Modus Operandi and 3Ddancer both opt for a purely instinctual approach.

“We don’t really care about sophistication.The main goal is to dance–and I’m not sure if there’s an intellectual aspect behind dancing,” says Kasimyn. Rachel echoes this sentiment: “We don’t analyze too much, we just go for it.”

Hubert Spangler is a freelance writer based in Berlin. He runs the local station CCTV radio and the netlabel Overthinker Mob. Follow him on Instagram @Bloomfeld.