If you’ve spent any time in Brooklyn’s underground club scene in the 2010s, there’s a good chance that you’ve come across Beta Librae (a.k.a. Bailey Hoffman). In the first half of the decade, she lit up Bossa Nova Civic Club with her Technofeminism parties, co-created with Discwoman’s Umfang. Later, in 2018, she switched gears and brought her curatorial talents to Nowadays, where she became a resident last year.

As a producer, her work is multifaceted—best exemplified by Sanguine Bond, her 2018 album on Anthony Naples’ Incienso label. On it she connects the dots between narcotic dub, off-kilter ambient and even tribal house. Hoffman debuted a live show at Panorama Bar a few weeks ago. TEB contributor Elizabeth Claire Herring met up with her for a wide-reaching conversation about creativity, live performance and the state of New York nightlife.

How are you feeling after finishing your first tour since being signed to Odd Fantastic?
Now that I am signed to Odd Fantastic touring feels more serendipitous. It’s a good fit for me, I feel taken care of and I’m grateful for that. Adapting to each show and venue quickly is new for me. I’m used to preparing for a couple weeks for sets in familiar spaces where I know what people are going to enjoy. So jumping around to a different show every day really forced me to get out of my comfort zone—going from a small venue to a big festival, and then to an outdoor venue to a boat…each performance had to be completely different. That was the most fun, but also most nerve-wracking aspect—adapting to each show really quickly.

Do you feel like you need to prepare a lot for everything you do? Or do you feel like you can say, “I’m bringing what I’m bringing, let’s see how it goes.”
Assuming the show is going to be a certain way isn’t the best way to prepare cause you can’t anticipate changes with the crowd. There were moments when I just had to wake up and focus harder than I assumed I would. It’s important to be able to adapt to the audience. You don’t want to over prepare because that takes the fun away.

Of all of them, De School was so personal. Everybody was up in the front, it was bright, and there was a sea of energy—I wasn’t used to having so much awareness from the crowd. There was a moment when I just had to become confident in myself. That was the most intense and rewarding show recently.

[Before Panorama Bar] :// about blank was the last show in Berlin, and I was extremely tired that day. I just started picking random songs with out reason, and it was fun to play old songs I’ve had for years to a new crowd. It was exciting to jump back into music I liked years ago and with a new crowd it felt fresh and alive again. 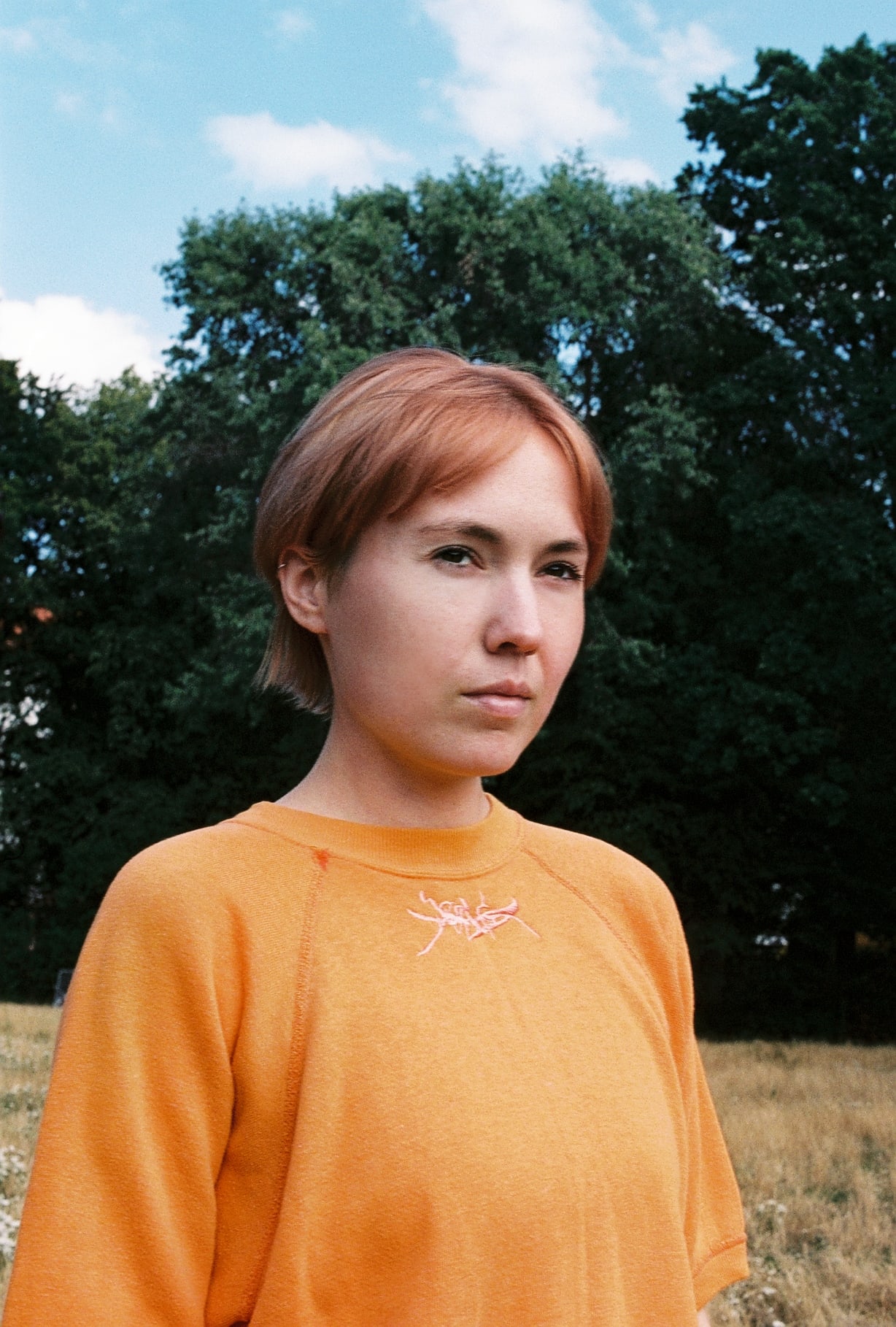 What inspires you personally in your music and where you drew references from for Sanguine Bond and for your DJ sets?
When I made Sanguine Bond I had been listening to house music for so many years, and a lot of the songs were made with a lust for that warm groove in the back of my mind. Now I’ve basically heard every classic house song, so where do you go from there when searching for new inspiration? I pushed myself past that.

At this point, I want to make rhythms I can’t categorize that are singular in their own world. Breaking away from a familiar song structure opens up so many surreal paths. DJing has helped me find inspiration as well. More genre bending music has crept into my subconscious. Taking time and energy to stay up to date on what other musicians/DJs are creating has influenced my references, and sparked new ideas.

What about your live sets? Could you speak a little about your production and music making practices?
In the past six months, every time I sit down and work on music it’s become a mood journal. I’ll work on something from two-to-six hours depending on how exciting it is and move on, repeating this process, then eventually I’ll look back on everything. I start piecing things together and it’s like weaving a blanket of sounds. That’s how I’ve started to make my live sets, working for weeks before putting those sounds together to create a story. I like to do the same with a DJ set, building up the energy then bringing it back down. Shifting the tempo and song structure creates waves of emotions and surprises, anything unpredictable. I enjoy rhythms for the most part.

Drums are my favorite starting point, I let rhythms subconsciously go where they are supposed to go and move on from there. Later I look back on what I made and I feel like I have no idea how that happened, which is the main reason I keep doing it. It’s like I keep giving myself surprises and gifts.

I don’t have one thing that inspires me, it’s mostly my way of expressing how I feel that day. When I put pressure to make something that sounds a certain way, I end up disappointed. It’s about the surprise element of where it ends up going that’s the important aspect. I’ve tried to sit down and just make a techno song, or think “today I want to make something harder,” and I end up feeling frustrated when the result isn’t what I envisioned.

I don’t know how to make a specific genres of music. I don’t know how to write music, I can’t listen to a song and say “oh that’s played in this or that way on this synth”. It’s helpful to start with each sound that feels seductive and then the end result is satisfying because you enjoy each specific sound instead of having a solid plan, thats how I go about it.

Where is the NY scene right now? What do you love about NYC that you can’t get anywhere else?
I feel like I am trying to keep up with a younger crowd, which is difficult since I have my own community where I know everybody and I have to work to look outside of it. I like having my Bossa and Nowadays nights because we can have out-of-town guests and it’s just as exciting as showcasing new talent in the city.    I have a monthly night at Bossa Nova, and it’s difficult to book someone fresh and new every time. At the same time, the venue is small enough that I can ask a DJ who hasn’t played out much, and people will be present and energetic.   NYC is nice because more and more friends are playing since it’s a small community with a lot of access. It’s fun to see people that you know who have good taste in music casually DJ’ing for fun. They’re not necessarily choosing it as their career. New York is good for that because there are radio shows and spaces where art and music overlap, so it hosts a really diverse scene and you see people play who normally might not.

Do you feel like the NYC music scene is becoming more professionalized and moving away from DIY? It seems like that could be the case as Sustain-Release grows and Nowadays becomes more popular, drawing bigger talent.
I think it is, I also don’t know if that’s because I’ve been around for so long, resulting in more friends and connections, but it seems like more people can go from casually playing one show a month to playing weekly. I’ve seen a lot of careers here take off really quickly. I’ve also seen people in NYC over do it really fast and run into this crisis where they run out of places to play, which is something I am very aware of. I personally try to move slowly and not take on too much at once, enjoy the big gigs and the small ones. I want to push myself to face any fears and try new things but it’s important to be present

What has having a residency at Nowadays has done for you? Has it changed your perspective?
I’ve had a Saturday at Nowadays for almost a year now. Fridays are mostly the house music night, and Saturdays more techno driven. I always play with 1-2 guests depending on who’s in town and how I see the night panning out.

Playing at Nowadays has been the best for me to explore different genres of music because the sound system is so clean, and the crowd is very accepting. I’ll usually start off with one vibe, and the night will end somewhere spontaneous and different by the end, but the floor doesn’t clear out. Having the indoor/outdoor spaces is helpful too because people don’t get fatigued and they can take a break from listening, best to give your ears and feet a rest when they need.

What are some of your favorite books and podcasts at the moment?
I love books/podcasts about human behavior, mental health and relationships. Comedic casual discussions about art/music and immersive bizarre storytelling keep me happy. I’ve been listening to Base Camp Beta, Invisibilia, Hot Brain and 20 Thousand Hertz. I’ve been reading John Hodgeman’s Vacationland and Jia Tolentino’s Trick Mirror.

And your fave tracks atm?
It’s been hard to not play any of these in the past few months! A mix of old and new.