When Tijuana ends up in the international news, it isn’t usually for it’s local music scene.

“In Mexico, everything is organized around Mexico City,” explains Ejival, co-manager and founder of the longstanding local label Static Discos. He says that, while the Baja California border town is a “great place for experimenting,” it’s seen as provincial, so Mexico City functions like a giant black hole for the city’s creative types.

Brain drain notwithstanding, Tijuana’s small electronic underground has generated a disproportionately large number of visionary artists in recent years. The city even has its own regional sound, ruidoson (“ruidoso” means “noisy”), which merges Mexican traditional music with punk aesthetics and techno tools. I compiled the selections you’ll find here—a combination of people who were born there, lived there for a period of time and/or still call the city home—through recommendations from friends and contacts on the ground, and together they suggest a strong goth streak in the region’s musical tastes. Perhaps that penchant reflects the rather dark history of the city itself: the savage violence that flared up in the late ’00s due to conflicts between rival drug cartels and authorities, rampant addiction and the violent effects of the militarized U.S. border that stands at the city’s northern edge.

But its seedy reputation constitutes only one of the many faces of Tijuana, says Ejival. “There’s the dangerous Tijuana,” he admits, but there’s also “the vanguardist Tijuana, the entrepreneurial, the commercial, the normal.” As the brutal cartel conflicts have more or less subsided in the last few years, the city has begun to draw renewed international interest in its audacious contemporary art world. It’s also become home to a booming craft beer brewing industry. “In that sense it’s full of contradictions. It’s an ugly city, but its border dynamic makes it feel really sexy too.”

Thanks to Conejito Colvin of Los Macuanos, as well as Paulina Méndez from Dealer’s Brand clothing in Chihuahua for their help in researching this guide.

Braulio Lam and Rodrigo Luviano make droning, shamanic industrial music that leaves the listener with a lingering and unshakeable paranoia. Their five-track ISO EP from last year is the perfect soundtrack for a little bit of dark magic, so press play, light three black candles, and wait for the storm clouds to cast evil shadows across your bedroom.

When it comes to ominous, lo-fi bedroom pop made with malfunctioning toys, Dani Shivers is at the top of the heap. Her discography’s predominant themes include dark alleyways, night terrors, ghosts, death, magic and candy, which should give you a better idea of what you’re in for. The singer, producer and performer was selected to participate in the next Red Bull Music Academy program in Paris this fall, and is preparing her forthcoming album, Syzygy, due out on the France’s Cranes label.

Benfika is one of the newest signees to Infinite Machine, a broad-minded bass music label anchored in Montreal and Mexico City. His debut EP for the imprint, 121214, reveals a knack for scalpel-sharp sound design as well as a deeply haunting sense of melody. What would trance arpeggios sound like at the bottom of a frozen ocean? Click to find out.

Santos brings the techno hammer down on Northern Mexico’s regional pop music. The result is ruidoson, the aforementioned local movement that he helped build alongside other Tijuana acts like Maria y José and Los Macuanos. It’s a wonderfully chaotic micro-genre that cannibalizes many of the iconic sounds of the US-Mexico border, feeding cumbia rhythms and banda brass sections through a warped, surrealist filter.

Five years ago Los Macuanos dropped El Fin, a groundbreaking and loosely conceptual debut LP that weaves together samples and live instrumentation to channel Tijuana’s strange psychic energy. Like Santos, the three-piece band’s early catalog draws upon the tinny whispers of the Mexican radio dial, offering distorted reflections of old and scratchy cumbia records—though their sound is unmistakably more sinister. However, band member Conejito Colvin says the group has turned toward a more industrial and overtly political aesthetic on its forthcoming album. “El Último Desafío” more closely resembles what you’ll hear on their long-awaited follow-up LP, which is due out this year.

This Tijuana-based imprint was founded in 2002 by the mononymous Ejival, who offered his take on the Tijuana music scene in the introduction. The label’s wide-reaching catalog emphasizes Latin American artists and charts a course around the outer reaches of house, techno, avant-garde pop and sound collage. Macario’s Topure LP from last year is a crowd favorite, and a great introduction to the label sound.

Ejival recommended that I check out Hidhawk, the noisiest artist on this list. The Tijuana native makes glitchy, zero-fidelity sound collages with what sounds like damaged or circuit-bent instruments and occasionally veers into more rhythmic or dance floor-oriented territory. She also recently launched Mundotheque, a blog that archives field recordings of traditional music from various countries for remixing purposes.

Marco Antonio Jiménez Gallardo first rose to prominence as a pioneer of the regional ruidoson style under the name María y José. However, his newer releases have moved towards a sound that straddles electro-pop and raw acid techno. His 2009 debut LP as María y Jose, Espiritu Invisible, is a kaleidoscopic journey through electrified folk sounds, and it’s absolutely worth visiting for those who haven’t yet. He also recorded a 50-minute mixtape of the rambunctious Mexican party music known as tribal guarachero that serves as a great primer for the genre. 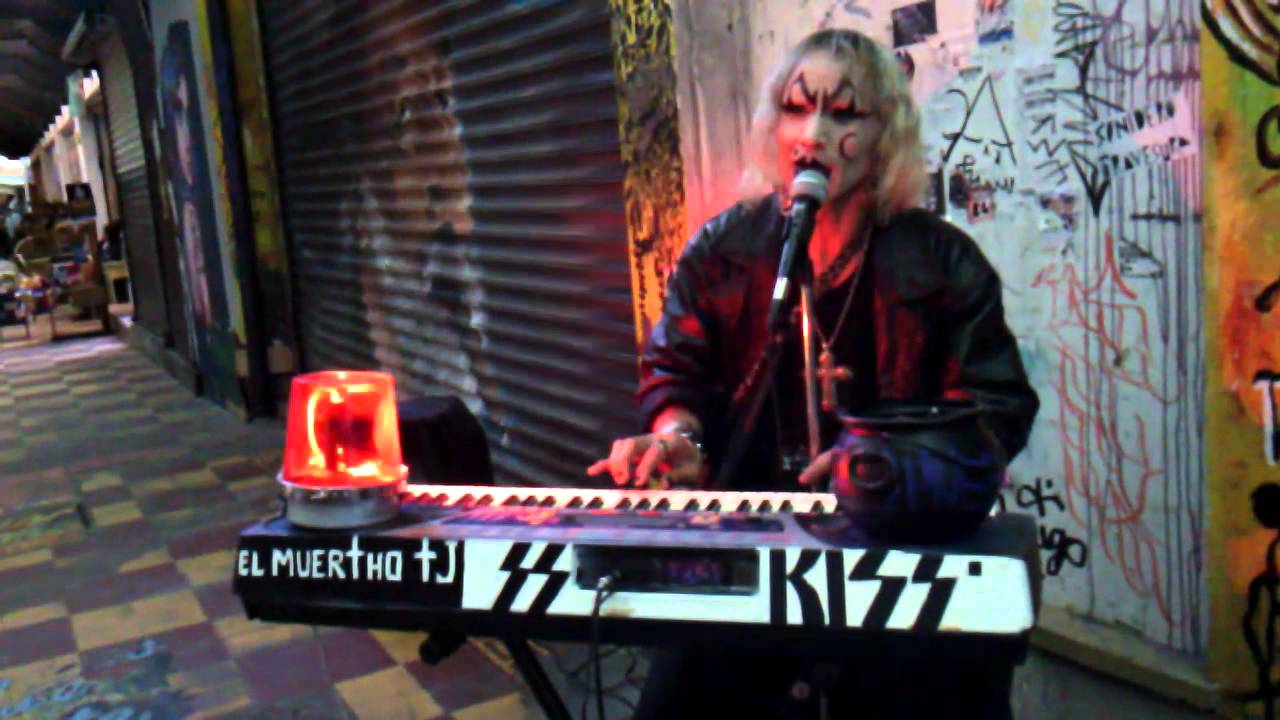 If you live in Tijuana, you’ve probably seen El Muerto—The Dead Man—posted up in the park, singing along to chintzy drum loops from his vintage keyboard. He’s very likely dressed in a leather trench coat, with his bleached shoulder-length coif, Gene Simmons-style face paint and a heavy silver crucifix dangling from around his neck. I was first introduced to him by the semi-fictional triple-X mockumentary Navajazo, which paints a sordid picture of the communities living on Tijuana’s fringes. Book him for your next party!

No guide to Tijuana music is complete without a mention of the Nortec Collective, a group of local producers and performers that formed in the late ’90s and quickly rose to legendary status across Mexico. Today, plenty of Latin American artists merge regional or traditional music with electronic textures and tools, but at the time, Nortec’s fusion of techno rhythms with border town pop called norteño was revolutionary. Bostich and Fussible are two of the most accomplished members of the now dissolved unit, and last year’s video for their track “Camino Verde” is a hallucinogenic tour of the Baja California coast.