Volker Bertelmann’s work as Hauschka has provided the framework for quite a few intense dreams. The German composer has a knack for seducing the ear with his compositions from their opening notes, and his latest City Slang release doesn’t disappoint. Aurally woven from atop a mountain in Japan, his latest live album 2.11.14 was recored on the title date and separated into two 20-minute sides. Exploring this work merited an extra step, so Daniel Jones enlisted the help of Carolin Langner, a musician and childhood pedagogue who in turn drafted music’s most honest critics: five-year olds.

Daniel Jones: First of all, Volker, I was very struck by the mood of the album. It reminded me of a mechanical human, or a machine that thinks it’s human, which seems to be trying to give voice to something both melancholic and hopeful.

We took a long journey from Tokyo by train, and the final three hours or so were very slow. Travelling through the landscape of Japan, I was struck by a sense of loneliness. The mood of the concert, I think, reflected this atmosphere. I tried to be as human as possible, actually!

DJ: What was going through your mind while you were performing?

A lot of times when I go onstage, I’m not really thinking much about what I’m doing. I just do it. Now we’re speaking, and I didn’t prepare myself mentally to talk with you. It’s a natural response. In a way, sometimes I force myself to sit on the stage and start to play—because that’s simply the activity I am there to do! That sounds very negative, but it’s not at all. I’m not thinking about the action much. I just pay attention to the environment, how close the audience is sitting to me, or what their faces are doing. Sometimes I don’t even look at the audience, because I feel I want to stay with myself.

DJ: It’s more like a natural response, then, spurred by setting rather than planning.

Exactly, and that’s how I feel my concerts should be for the moment. I like the nuances in the environment. I like to feel what’s in the air and to be able to respond to it rather than falling a path I’ve already set.

Carolin Langner: That was something that I was curious about. The press material says the live album is loosely based on Abandoned City, and I was wondering if those images, those places you named those particular tracks after, were re-occurring while you played—or did they merge into something else?

With Abandoned City, I used this as a record that was creating associations. The idea of abandoned places became a metaphor for myself when I’m writing music. That’s exactly how you described the live album, Daniel; it’s a mixture of sadness and fulfillment. I think abandoned places represent a whole life circle. They had life, it disappeared and now they sit, maybe with a future, maybe without. In a way, if I’m looking out of my window and I imagine the world outside in two or three hundred years, maybe it’s completely covered by grass. Maybe, then, these empty places give you a glimpse into your own future: a reset button.

I’ve had the feeling that the live concert—and in fact all of the concerts I’ve done since—have been driven by finding pictures for that longing, and on the other side the idea that something will fade away, that life will disappear. And after that, maybe something else will be born; a new beginning. In most abandoned cities, there is the chance to rebuild.

CL: I was watching a documentary about [the nuclear disaster at] Chernobyl and how nature is taking the land back. Suddenly, there are these new animals that have placed themselves on the site, and now there’s talk of turning it into a natural preserve. Something tragic happened there, but now there’s a chance to start over.

I think it gives hope for us as well. We’re in a situation where we definitely know that if we don’t change, there will be a reset button. Even the economy is based on a situation of increase, increase, increase. Every small person you ask in the countryside can tell you that increasing something exponentially doesn’t work. But in a way, our continued actions say that we could give a shit. We just continue.

I do feel that cities retain the memories and experiences of the people who lived there, in all their mistakes and beauty, but I also think cities sometimes represent this madness of dreams and concepts as well. They degrade into something out of control, which has no meaning anymore. As a musician or artist, you can see your career like that as well: pushed up by something that is unreal, not normal. You degrade as well, empty out, and then that emptiness needs to be filled.

In the last couple of years, I’ve been thinking about my career. What am I doing? Sitting every day in a place recording music. What is the sense behind it? It’s not that I’m in a crisis, but more that I feel I’ve quite slowly obtained the knowledge of how to approach life. That means as well that I try to always give my best, but I don’t give my best too much sense. If I create something and put my meaning into it, as soon as it’s finished I feel like I have to let it go, like a balloon, and not look back. In my younger days, I did that a lot. It made me very sad, and a very complicated character.

DJ: I think cities are one of the loneliest places, actually. Having moved from New York, being surrounded by so many people who follow a set pattern of MP3 player and avoiding eye contact. It’s a strange sort of imposed isolation that I think large cities attract, and maybe even demand for the sake of sanity. What was that poem by Bukowski…? “Alone With Everybody.” 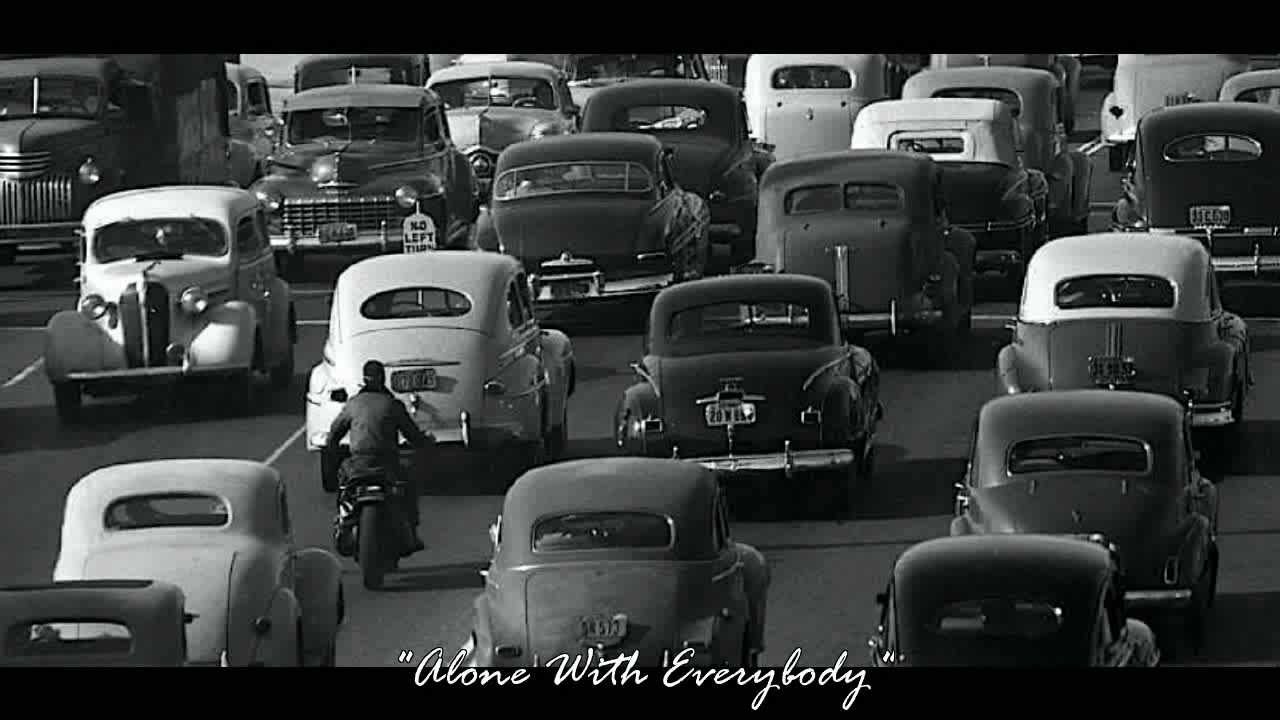 I think that’s true. Cities often absorb not only the memory of those who live there, but also reflect humanity’s intent and promise. It’s very interesting, but it also puts one in a position of ordering these systems so as not to become a slave to them. I’d rather think in terms of finding a place where I can be who I am. This means to always get input, analyze yourself while you get this input, and then decide what feels right and wrong. I feel this is something I can do easily in empty places. So many good things started from emptiness, from a fresh perspective.

CL: What’s interesting about that idea is that I also work as a kindergarten teacher. Recently I was with four kids, ages 5 and 6, and I told them I would play them an album because we sometimes listen to music and talk about the images it evokes or which moods they feel. So I said, “Listen: there’s a musician named Hauschka who went to Japan and recorded an album, and I am curious about which instruments you might hear.” As soon as I mentioned the name Hauschka, one said, “Das ist ein Stubenhocker, der immer Hausschuhe trägt.”

I think that’s one of my favorite explanations!

CL: It also made me think of the album cover, which features you sitting there, playing an invisible piano and describing loneliness. While we were lying there listening to the record, and one kid said, “Ah, I hear that someone is drumming on the floors!” “Oh, is that a violin?” and then this beat started and they started moving their hands up in the air. Then I asked about the feeling that they got from the album, and they said, “Oh yeah, that’s really rock-y!” That also made sense to me, at least in the first part. Afterwards they said, “Now I feel really light!” They started describing a place like a desert, but one said, “It’s in the dark and there’s a sandstorm” and another said, “It’s really lonely. There are animals but no humans.” Then their bodies started moving, they couldn’t sit still anymore to talk with me. I find it so intriguing how kids perceive music and how it can often match up with the idea behind the composition, even if they don’t know it.

I think it’s very spontaneous, in a way. That’s something that I recognize when I’m coming out of a concert; I’m usually very uplifted. These descriptions from kids are interesting because they describe as well what adults are feeling when they come to me after a concert. They’re full of something that they want to describe: “I saw this, I went there.” Some are too shy to tell me, so they write me an email afterwards saying that they couldn’t talk to me because they just weren’t able to.

Kids are like mirrors for this music—not that I’m purposefully making music for kids, but it’s wonderful seeing how they react. Here in Düsseldorf, we have a children’s culture club where kids can explore instruments and can see and talk to performers. I was invited there recently to perform, and I played for half an hour to these children. Then we all talked together and I explained how things worked, and not only the children were standing around me but the parents as well. They were excited in the same way! That’s really interesting to me, seeing how everyone can be triggered to move.

CL: I was also curious to know how they would react to seeing which objects you’re actually using, because they listened quite well, because they even mentioned, “Oh, there is a cymbal!” even though it was a tiny moment. If you let yourself into the music totally, it can change the way you listen.

I had the same sense when I started making improvised concerts, which I did mainly right away. My first tour as Hauschka, I played a concert at Cologne’s Stadtgarten on a grand piano. My gear that I was using to repeat my program wasn’t working, so I had to improvise. I felt like, “This is what I want to give people: me, here and now.” I want to take them by the hand for an hour, and have them follow me. The results can vary, of course: playing without a net, being able to lose control…sometimes I forget that if I stop, there’s no music anymore. That kind of freaks me out sometimes, but at the same time it opens up the whole space.

CL: Maybe there are some people in the audience who love exactly that moment, this thinking process that creates gaps or silence, less layers of music. Then that’s when they can really connect and dig in, at this specific point.

Maybe that is the perfect connection point: a chance to see…not a struggle, but a real person.