To say that Berlin takes its post-industrial heritage seriously is something of an understatement. After all, this is the city of Einstürzende Neubauten and the Geniale Dilettanten (“ingenious dilettantes,” or amateurs) movement, where noise, punk and new wave crested together in a gloriously gritty avant-garde era that still reverberates today. Many of those acts—including EN, Malaria! and Sprung Aus Den Wolken—performed at the very first Berlin Atonal festival in 1982. But even in this period of rich creativity, Dimitri Hegemann—Berlin Atonal’s founder, as well as the most visible founder of Tresor, among other notable cultural activities—remembers it as a grim time: “Nobody had any money, nobody felt that the future was bright.”

34 years later, the Wall is a distant memory, Berlin is a well-publicized magnet for “creatives” of all stripes and experimental music is a vast landscape that intersects regularly with the mainstream—even the abrasively experimental sound originally championed by Atonal (Yeezus, anyone? Or how about Nine Inch Nails?). Hegemann now controls the Kraftwerk, a huge former power plant in the city center that houses the clubs Tresor and Ohm, and Berlin Atonal is a festival revived for its fourth consecutive year that’s firmly established on the calendar.

Honoring this legacy understandably feels like a major concern for the new Atonal. Although it now features an almost entirely electronic line-up with a major strand of techno—not possible in the ‘80s, of course—the focus is still experimental music. Largely, this tends to manifest as variations on noise, drones, abstracted electronics, industrial evolutions, or a combination of some or all of these. While that may sound like a lot, the exhaustive exploration of these closely related niches over the course of five days renders much of it fairly monochromatic. This is partly due to the fact that certain sounds become tropes heard over and over again: bass rumble; yawning drone chasms; heavy distortion; overarching darkness. The Kraftwerk itself also plays a role, as the interior is a huge concrete cavern/cathedral that’s completely unforgiving in both appearance and sound. Thus, every set performed on the main stage sounds as though it’s been patched through the same effects—bassy, boomy, full of reverb where mid-range or quiet detail can get lost. It’s a room that must be as challenging to play as it is inspiring.

Occasionally a masterful performance provided revelation, like that of duo of Rashad Becker and Moritz von Oswald. With both on electronics, von Oswald also played grand piano on a Satie Vexations tip. Rhythmic swells, minimal chordal plunks, bass drones and live sampling formed the basis of a set that felt both mesmeric and odd. When a loud feedback drone bloomed and subsided, it revealed layers of other sounds in audio excavation. Lovely clicks and whirrs, occasionally a dubby rhythm and the kinds of isolated details that usually add flavor to techno were presented here as improvisational ear perks.

Drew McDowall’s history as part of both Psychic TV and Coil perhaps helped him to create an unusual melodicism with some familiar ingredients (drone chasms, metallic scrapes, rumbling distortion, etc). His set had distinct movements and texture. Croatian Amor as Love Means Taking Action, the solo project by Posh Isolation’s Loke Rahbek, stood out for a different reason. He used elements of an audio play and three mannequin actors as stage dressing for maximum confusion, plus topical appropriated video clips featuring anime, finance, protest and video games. Alongside the pre-requisite drones and bass rumble, Rahbek had a refreshing lightness of touch for a greater range of emotions. It was one of the very few performances that felt rooted in a modern zeitgeist. 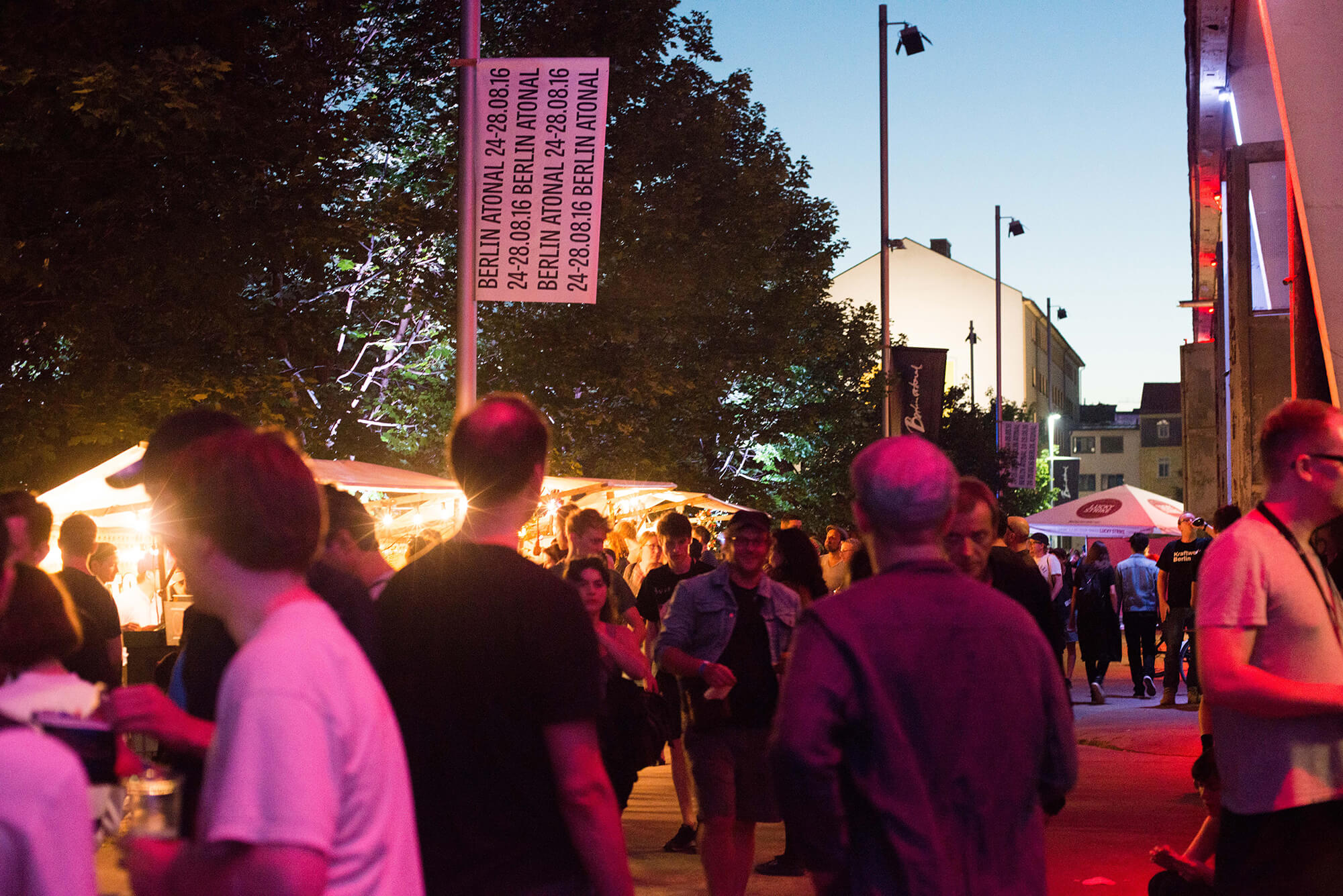 Sunday was the most consistent day for the main stage, where every act offered quality and distinct personality. Neue Deutsche Welle pioneer Pyrolator (aka Kurt Dahlke) offered a versatile and fun techno constructed from Krautrock legend Conrad Schnitzler’s source material. Second Woman—a live debut by members of Telefon Tel Aviv and Belong—was a festival highlight, showcasing real fluidity between experimental and dance music within a constrained sound palette. While they obviously reference artists like Mark Fell, the set proved again how well such ideas can work in that space and recalled Ripatti’s performance from the first resurrected Atonal in 2013. Porter Ricks’ live debut featured both atmospheric haze and pleasing dub techno, while Robin Fox’s laser light show synched with playful and energetic squelchy sine waves. Alessandro Cortini debuted an almost shoegaze-y set of fuzz and melody, and while the childhood videos were far too heavy-handed in nostalgia, musically it was a good festival closer.

Stage Null on the ground floor of the Kraftwerk had its own continual sound problems that were surely exacerbated by the room. This felt especially disappointing during Andreas Tilliander’s much-anticipated TM404 project of live jams on classic Roland machines. If you got close enough to the stage, which was not possible during some sets, it worked well-enough—as was the case for me in catching Russell Haswell’s charismatic noise, or Raime’s tense post-punk. The latter have wisely incorporated a talented live drummer who essentially plays drums as the lead instrument.

During main stage hours, Ohm is little more than a loud chill-out lounge but it gains magnitudes of importance once the main stage shuts down. On Thursday and Sunday nights, when Tresor isn’t open, the line to get in can disrupt any plan to see music there. If you ducked in earlier in the evening, you might have been lucky enough to catch some of Neubauten’s Jochen Arbeit selecting from a killer collection of beat-driven obscurities. But you’re just as likely to have found another variation on experimental noise. While Tresor and Globus had solid lineups reflecting their usual respective visions, it’s fair to say that hearing the funk Marcellus Pittman brings to house music felt unusual in the Atonal environment.

One of Atonal’s singular experiences is the Modular Schaltzentrale room. Comparatively tiny and equipped with comfy seating, its walls are lined with the controls of the former power station, so it’s already vintage sci-fi in there. Add to that a bank of modular synths set up facing the audience and manned by world-class artists jamming for fun to a completely unannounced schedule made it part workshop, part concert and part hang-out session. Working controls on three separate visits were Sigha, Andreas Tilliander, and Mark Verbos with John Elliott of Emeralds, who performed at the festival as Imaginary Softwoods. The music that went down there was just as enjoyable as a lot of what you might have heard elsewhere on-site.

Atonal occupies an interesting position in that they clearly aim for a specificity that can be wearing over the course of a lengthy event. But more often than not, audiences respond to a clearly defined narrative, and that’s the kind of context that the festival does a good job of providing. The recurring crowds prove that there was a need to represent such a scene. As much as I’d love to see them expand their representation of experimentalism beyond their own legacy, the history that they play a large role in undoubtedly is something worth celebrating.