“This year has been crazy,” says Tunisian-born Cera Khin from her apartment in Berlin. “I started the year in Tokyo. Then I went to Shanghai, New Delhi, Bombay. Then to Mexico and New York. Tasmania!” There have been two Boiler Room outings, a debut at KHIDI in Tbilisi and many European shows in between.

Khin has only been playing for the least three years, but her infectious rave-heavy selections and nonconforming attitude have made her one of this year’s breakout techno stars.

At the moment she’s mostly playing techno parties with a harder, faster MO. But if you retrace her musical evolution (as mapped out on her monthly Noods Radio shows), you’ll see that she’s into a huge range of styles—and isn’t afraid to mash them together in a DJ set.

There’s also her label, Lazy Tapes, which Khin launched a year after she started DJing as a way to release her own experimental productions, resulting in the haunting three-track cassette, Guided Meditation, with Young Echo affiliate Ossia. She’s since released music from Christoph De Babalon and Peder Mannerfelt and promoted a series of label nights at Paloma Bar and OHM in Berlin.

“I’m the kind of person who likes to challenge themselves and make hard decisions,” she says about the move to Berlin in 2013, which she found culturally and physically difficult at first. Six formative years later, however, Khin considers the city home, with its liberal values better suited to her own. “You can do whatever you want here, and no one will judge you. That’s inspiring to me. In Tunisia I always feel restricted, and people are fighting to do things there. It’s different here. It’s so free.”

Holly Dicker met and spoke to the artist determined to do and play whatever the fuck she wants.

How did you get into DJing?

I grew up in Tunisia. I studied marketing at university. I was listening to music, but I never thought, “I’m going to be a DJ.” Then I moved to Berlin. I was going out—like everyone who moves to Berlin—but I realized I wanted more than that. I didn’t want to be just a raver. I wanted to play music. I saved up some money and bought turntables. I had been collecting records and learning how to play. Then I ended up doing a radio show on Noods—one of the first shows on the station.

Can you tell me about your Noods shows?
In the beginning I was trying to create a story. I didn’t think about the mixing or the techniques. The first Noods show I did alone. After that I always invited guests—people whose music I like, or friends. I didn’t know Peder Mannerfelt at the time; I just asked him on Twitter. Christoph De Babalon was the same: I just asked him online, and he said yes. Then it became like brushing my teeth: Every month I had to record a radio show. It just grew organically.

Why is radio special to you?
I built myself through radio, and I feel weird if I don’t record a show now. It’s been such a big part of my life. Now whenever I travel, I will do a radio show. It’s a nice way to present music and yourself  and to support your friends and the music you love.

How does your Rave Apocalypse show on Rinse FM differ from your Noods residency?
In all of my shows, I’m playing lots of different stuff, depending on my mood. I like mixing genres and different tempos. For Rinse FM I wanted to be more specific .Now I’m listening to euphoric and emo stuff. I decided to do back-to-back with guests for Rinse, and it’s more dancefloor-oriented, with everyone showing their hardcore side. Now I’m continuing the “Rave Apocalypse” theme on Noods, going back-to-back for my next show with Gabber Eleganza.

How did you get into hardcore?
I listened to The Prodigy as a teenager. I never had the chance to see Altern-8 or Acen play. I grew up in Tunisia, so I had to dig online—or go to record shops when I moved to Germany. My favorite record shop here is called Audio Inn, and they sell lots of secondhand hardcore, happy hardcore and rave records.

Why are you playing hardcore at the moment? What do you think is special about it?
I love combining dark sounds with uplifting sounds, and I find that with hardcore. Also, these kinds of tracks are fun, and I don’t want to take myself too seriously. DJs are there to entertain people, and they should be entertained too. I like for people to lose their shit and rave. I hope I can recreate that ’90s feeling now, even if I wasn’t there the first time around. I also like playing new fresh rave tracks to create a retro-futuristic feeling, not only old classics.

I can’t believe you played Da Hool on Boiler Room, classic tune!
I grew up with French TV, and we used to see all these ‘90s hits. I grew up with them, and I’m not going to hide it. I also grew up listening to Coil and Nurse With Wound, but at the same time it’s important to never forget the fun impact of music. You can be a DJ and a raver at the same time.

I-F is one of my biggest inspirations, even though we play different stuff. The way he plays music, he can play heavy, nasty electro and then mix it with ABBA, and it’s amazing. The energy he gives to the crowd, he knows all his tunes and the lyrics. I just love his vibe.

Why did you decide to start your own tape label?
I had a dream about starting a label, and then I did it. I didn’t want to complicate my life by sending music to other labels. I released some music on tapes because I like the format. It’s more personal, kind of nostalgic, cheaper and cute!

What is in the pipe for Lazy Tapes?
There will be a new record out end of the year from this Italian producer called Anna Funk Damage. It’s weird, raw and dangerous. I’m working on my own music, and the king of hardcore Marc Acardipane wants to do something!

You recently played with another hardcore legend at Strange Days during ADE. What was that like?
It was one of the hardest sets I’ve ever played. Knowing that I was playing right before DJ Promo, I started my set at 150 BPM and ended up at 190 BPM. It was mad and intense!

You’ve had a huge year of gigs and touring the world with the label. What has been your highlight?
Lente Kabinet. There were thousands of people, everyone raving. Normally Lente Kabinet is disco and house, and I didn’t know that. I just did my thing. I always play the music that I love. When I love the music, I’m in a good mood, and people see that. I transfer that energy. I can never play music that I hate. If I played something I didn’t like, my face would be weird.

What are your future plans?
This year has been my highlight year, and I’m really grateful. I don’t want to take anything for granted. I don’t know how long this is going to last, but as long as it does, I’m happy. When it stops, it stops. I’m just going to work for it, be myself and that’s it. Next year I’ll play more gigs, release more music and push artists I like. Just continue, never give up.

George Nebieridze had two assistants for this photo shoot. Their names are Louisa Zimmer and Dodzi Kobakhidze. Visit his Instagram page and online shop. 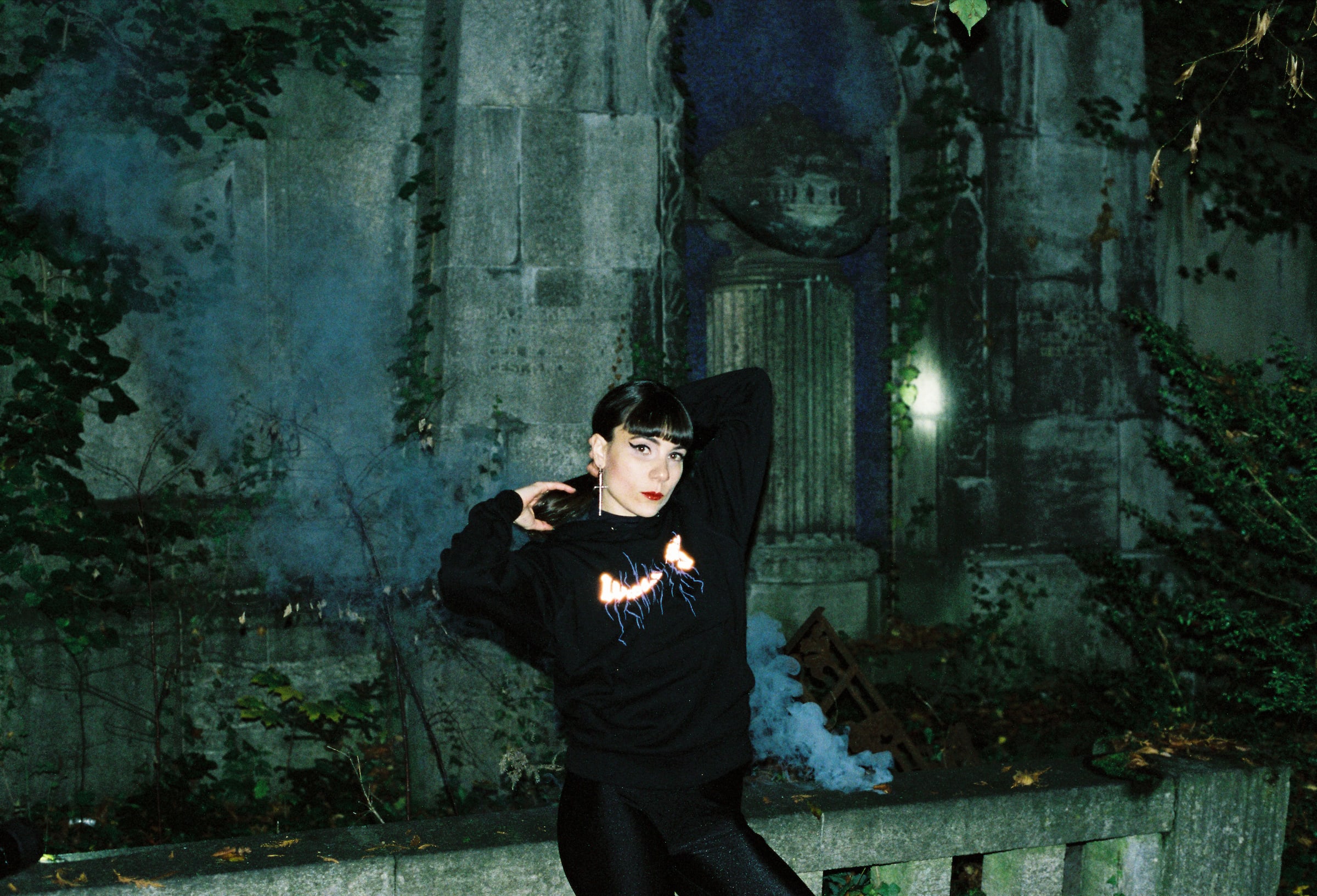