One crisp Berlin afternoon, Colin Self opens the door to his apartment by Kottbusser Tor and pulls me into his enchanted realm. Dressed head to toe in green, with blue eyes like shallow pools and white-blonde hair twisted into a mermaid braid, he reminds me of a playful wood nymph as he flits around his living room, which has been fashioned into a studio. Next to a computer playing his latest music video, the shelves are lined with Korg synthesizers, keyboards, microphones and a bite-sized dulcimer—a ukelele-like instrument that Self picks up and starts absent-mindedly strumming. The walls are dripping with plants, which dangle from the ceilings and poke out from the courtyard-facing windows (“Ah you’ve met my aloe!” Self exclaims, stroking its juicy tendrils. “She takes care of me—we are so connected.”).

It’s hard to think of another artist who’s accumulated more hyphens in their careers than Self, a puppeteer-drag-queen-choreographer-video-artist-composer-singer best known for his grand, experimental operas. I first came across Self’s work in the mid-2000s, when he was part of the avant-garde drag collective Chez Deep (which also included pre-Hollywood fame Hari Nef), as well as the short-lived satirical boyband #HDBOYZ (with Ryder Ripps, Aaron David Ross and others.) In 2017, I caught the final night of The Fool, a surreal chamber opera that Self co-created with the artist Raul De Nieves. The show unfolded like a chthonian fantasy full of glittering costumes and eerie choral voices. At the end, the cast hugged in a circle and cried out of elation. It was one of the most breathtaking shows I’ve ever seen—I could not get it out of my head.

Self’s latest album Siblings, the sixth and final chapter of an opera series dating back to 2011, centers around the idea of queer kinship and the importance of non-biological families, which is a recurring theme in his work. Uplifting and majestic at times, disruptively alien and weird at others, the albums spans everything from a political poem recited by Belarusian artists to the jabbering staccato of runway-battle vogue, and even the demented, rubbery basslines of avant-EDM.

Self is part of a group of queer artists who are experimenting with the human voice in intriguing and political ways. On Siblings’ stranger (and more rave-ready) tracks, vocals are often warped into robotic squeals, stuttering over each other as if unfolding over splintered dimensions. But profoundly tender and heart-wrenchingly human emotions comprise the album’s core. In “Foresight”, Self starts out singing as if in an echoing chamber: “I see on my screen all the doubt, where it comes from, why you trust in no one.” As the song crescendos over beating drums and stomping piano chords, his tone switches: “Our family… we refuse this outcome / we are proof of the foresight of the story we write.” “I” turns into “we.” Individual anxiety becomes collective resistance. Instead of do-it-yourself, it’s about do-it-together.

My afternoon with Self passes like a half-forgotten dream. His sweet, soft-spoken demeanor works into feverish explosions of excitement as he pulls apart the ideas behind his album, hands exploding into the air and then coming together over his heart. At one point, he pulls out Donna Haraway’s The Cyborg Manifesto, reading from its pages while explaining that the album could be seen as an ode to the post-structuralist, feminist sci-fi writer, who is his ultimate hero. Suddenly we find ourselves sitting in lengthening pools of shadows as the sky shivers into the evening. So we head out to dinner, and along the way, Self realizes with a start that he’s misplaced his phone, but shrugs it off. A few hours later, he texts me that he’d found it. As if by magic, it was hiding in pages of the Donna Haraway book.

You started out doing both puppetry and drag—have you found interesting connections between these forms of expression?

I hadn’t thought about this until you mentioned it, but they are two ancient histories that are deeply interwoven and dear to my heart. Puppetry employs the magic of convincing an audience that an object has the capacity to express itself. Drag seems to do the same; it is about creating a temporal world in which the laws of reality are suspended, and the human body can become the host for an alternate universe.

Both of these things are embedded in imaginary practices, which I think we all deeply need in order to activate thinking beyond the limits of what seems possible. I always think of imagination as being an immensely underwritten political tool, often disregarded as being silly or not serious. But the sci-fi feminist writer Ursula K. Le Guin had this incredible quote that I often think about: “We will not know our own injustice if we cannot imagine justice. We will not be free if we do not imagine freedom. We cannot demand that anyone try to attain justice and freedom who has not had a chance to imagine them as attainable.” 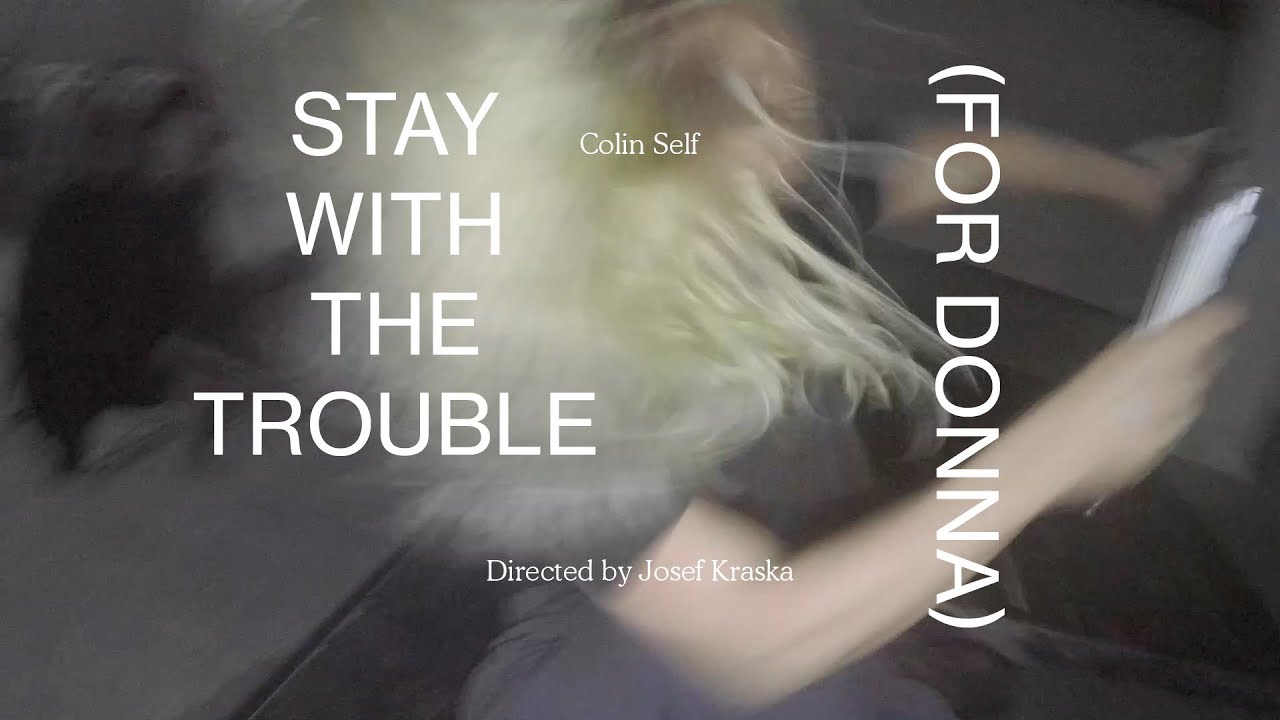 Some people might just see it as ridiculous, but I think that ridiculousness and the imaginative powers of puppetry and drag both hold the power to envision new worlds—and solutions.

You grew up hanging out in the Pacific Northwest riot grrrl scene, right? How did that scene and its politics influence your later work?

Yeah! I used to hang out in a lot of living rooms and basements in the PNW, and very much was passing as a femme womyn back then, mostly modeled after the queer women I wanted to be like: Wynne Greenwood, Sleater-Kinney and Khaela Maricich. Around this time, a rogue copy of Donna Haraway’s The Cyborg Manifesto was given to me as a zine and it changed my life; it was a kind of ethos and logic that allowed for a porous, evolutionary modality of living—”forever in transition,” as David Wojnarowicz calls it. This gave way to my first opera, “Kelsey & The Dead Flock Girls,” and has stretched all the way to my present day.

Tell me about “Stay With The Trouble (For Donna)”, this really sick, avant-EDM track that’s dedicated to Haraway.

“Stay With The Trouble (for Donna)” is kind of a troublemakers anthem, aptly named after her most recent book, Staying With The Trouble: Making Kin in the Cthulucene, which feels like an imperative inquiry into our current global crises and anthropocentric storytelling. I wanted to heed her words, her thinking, and the urgency we have, more than ever, to be troublemakers. Within Haraway’s book, the essay “Making Kin” examines how we make kin beyond nuclear and biological lineage. Queer/non-biological family narratives feel like a precursor or gateway to imagining non-anthropocentric familia.

The importance of queer kinship and non-biological families has been a running theme throughout your work. Why do you think this idea of interdependence—versus independence—has been so powerful to you? How has it shaped Siblings?

I started my most formative years in basements and DIY spaces run by queer and feminist communities, and these environments have always been places of refuge for those who couldn’t survive elsewhere. Often everyone was starting from nothing or had experienced trauma and had to forge a new life elsewhere.

The queer collectives I’ve been part of—from Chances Dances in Chicago, to High Fantasy in San Francisco and Clump in New York—have always come from recognizing that if we didn’t make a world for each other, no one else would. These spaces are non-universal solutions, and are sometimes troubled with hierarchies, mental illness and fighting. But I think that has to be a part of the narrative. Building interdependence means problem-solving together and recognizing that queer families are not all utopic. I wanted Siblings to illustrate the emotional complexity of these spaces. There is a lot of joy and a lot of pain—and a lot in between.

One of the most interesting things about Siblings is all the different ways you play with how the voice can sound. Can you explain how you’re experimenting with the human voice on this album? Do you see it as a potent political tool?

Yeah! For Siblings, I wanted to imagine a presence of extreme vocal plurality without conformity. It felt important to develop a cacophony of real and imagined characters engaging in the use, misuse, rejection, definition and re-definition of the voice.

I lead these XHOIR (pronounced choir) workshops that are often about re-introducing people to the disregarded power of their own voice, and the power of voices together to create change—in opposition to forces that make us feel disempowered, caged in, quieted and removed from our self-agency.

In Anne Carson’s essay “The Gender Of Sound”, she names various moments in history when feminine or high-pitched voices were prosecuted, and how deeply the control of voices—of the scream, of the utterance—is throughout history. I’ve always felt an allegiance with blowing back against the patriarchal forces that demand voices be quieted for productivity, for reason, for orderliness. I want to emphasize the urgency for us to learn to become better listeners, and I think that comes alongside bringing attention to a plurality and complexity of voices. Myself included, I think we are all in need of a deeper, more invested relationship to how we listen to each other.

Do we need to see the live performance to completely “get” what Siblings is about? Why did you choose to perform the music in such an elaborate, theatrical way as opposed to doing a “regular” show at a music venue?

Here is a video of the performance, in case that helps: 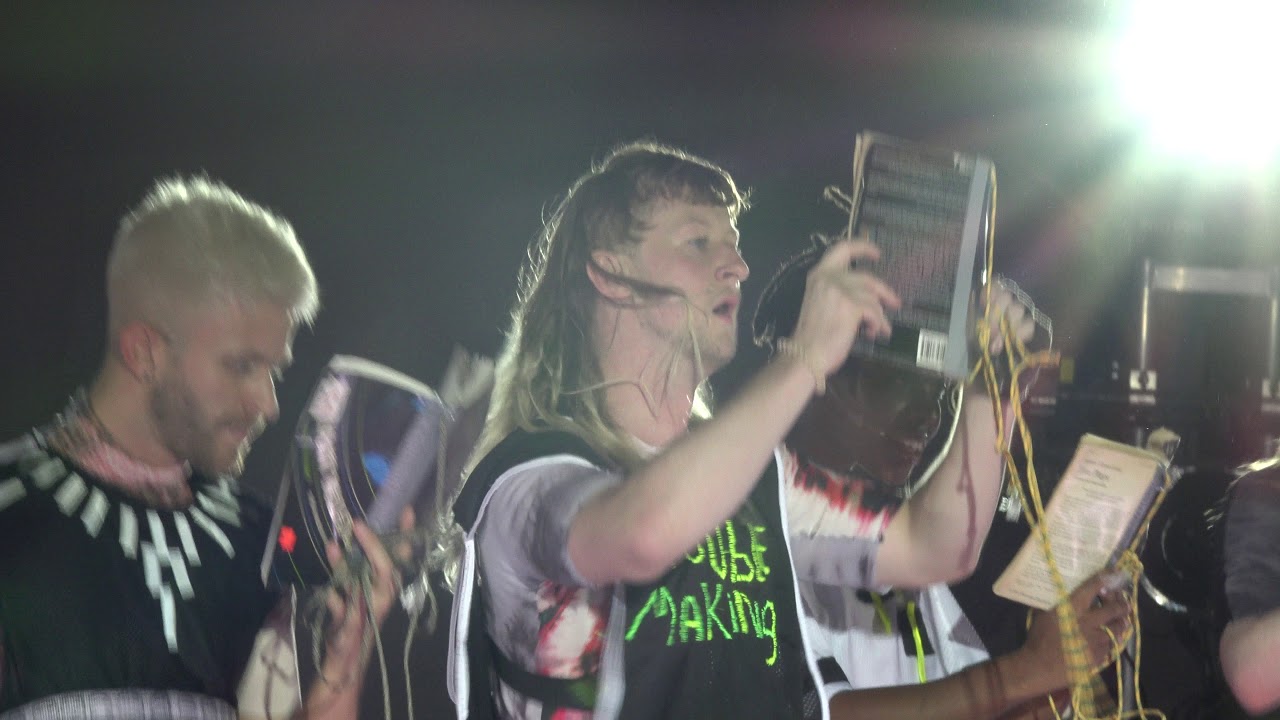 The live performance has the group (lexi welch, Tara-Jo Tashna, myself, Sam Banks, and Lyra Pramuk) singing and dancing to content from the record with a string trio accompaniment, inter-spliced with recited text or monologues. If it were up to me, I would only do large-scale performances of this record for everyone, but it’s a show that requires resources from festivals or curators.

It’s totally OK by me if people don’t understand what Siblings is about. In the process of making Siblings, we talked a lot about being queer and making yourself legible to others. Queerness, poetics, and other portals often exist in opposition to “making sense.” I very much believe in living nonsense, and am more interested in reaching across different audiences and pointing to that in-between space of marginal understanding.

Perhaps the Siblings compendium that I wrote, which comes with the record, is a potential window. An excerpt: “We refuse naming. Measured if a threat. Naming is measured. The unnamed insurmountably refuses. To refuse the threat of naming. To legibly name refusal. This is enough to articulate a precedent.”

Read more: Check out the wild side of Berlin’s queer club scene with these photos by Spyros Rennt