The neighborhood surrounding Brooklyn’s Bedford L subway station has been systematically re-built and re-populated—predominantly by upwardly mobile younger generations—in the last ten years. And in the wake of myriad new construction projects, artisan craft stores and extravagant eateries, there are few corners of the original community that have been left untouched. Drew McDowall’s apartment, however, is one of them. On the light and spacious top floor of a Kent Avenue loft, the musician keeps his studio, living quarters and accommodation for his three adopted cats. The artist has been living in New York for twenty years since a coin flip he made between relocating from his homeland of Scotland to either the west coast or the east.

His living room, like his music, is replete with artifacts that represent his guiding philosophies: large-scale black and white paintings bearing the names of hallucinogenic drugs, radical occult and anarchist-leaning literature and stacks of records from the worlds of underground electronica, metal and noise. 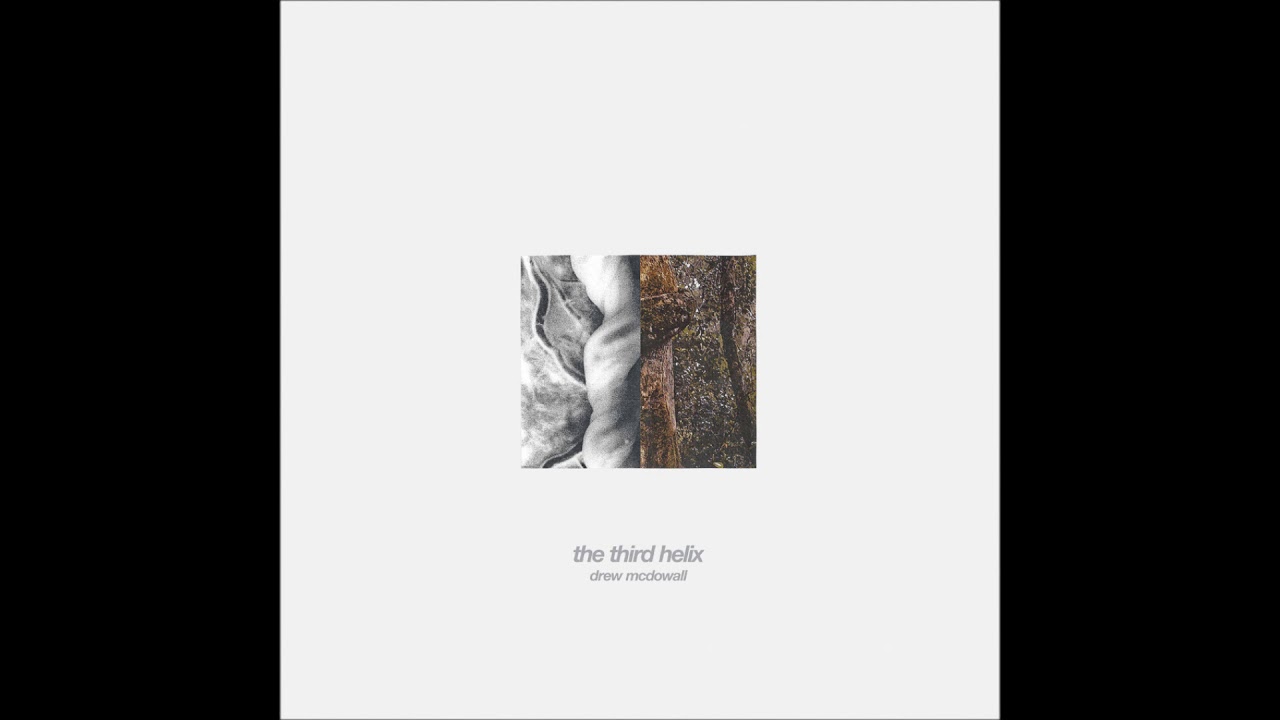 The decorative scheme comes as no surprise; McDowall is largely known for being a member of the revolutionary and highly controversial British industrial outfit Coil. But in the decade-and-a-half since its dissolution in 2004—after lead singer and songwriter John Balance fatally fell from a two-story window—he’s been at the helm of his own productions. And his recent solo work, like that of his experimental forbearers, is uncompromisingly dedicated to exploring the limits of the conscious mind. His most recent release on Dais Records, The Third Helix, is no different. It adopts powerful drone techniques, reminiscent of his reincarnation of Coil’s Time Machines, that slip the listener into the liminal space between reality and a celestial and hallucinatory otherness.

“This theme is something that’s been a common thread in all my work,” he said while drinking his third cup of black coffee—an activity that he mentioned he enjoyed doing while “babbling.” “I don’t really know why that it is, but I just seem to get pulled back into it, from the first experiments I was doing with tape loops when I was, like, 16, through Coil and now onto this.”

Coil’s cult-like fanbase knows that the band, which fluctuated in membership over its more than twenty years of existence, was deeply entrenched in occult doctrines and practices passed down from Aleister Crowley, William Burroughs and Brion Gysin. The group was also a proponent of Austin Osman Spare, a painter and occultist whom McDowall credits with influencing his body of work on a subtextual level. “His whole concept of ‘Neither-Neither’”—the state of the “total vacuity” of the conscious mind, which is also a concept central to Buddhism, yoga and tantric practices—“is a really powerful thing. It’s the practice of thinking about disparate, contradictory notions.” One of the goals of imbuing artistic practice with philosophies like Spare’s is to treat compositions, performances and productions more as spiritual tools than as musical pieces.

The Coil collaboration—and now McDowall’s work alone—was and is also deeply informed by a similar literary and artistic technique called the cut-up method, which was conceived in the Dadaist period and popularized by Burroughs in the 1960s. The exercise involves taking a fully linear text or image and cutting it into many parts. It’s believed that rearranging these disparate original elements yields new, powerful and unexpected meanings that were latent in the earliest version of the text, photo, musical piece or painting.

“The cut-up method is one of those touchstones for a lot of people who came out of what gets called ‘industrial,’” McDowall explained. “There was a phrase that Burroughs used…‘How random is random?’ The idea is that you can do this and something new will leak through. It’s really powerful. It can still cause an abrupt sense of shock when it works really well, and you’re like, ‘Wow, what is going on?’ It still is, for me, one of my favorite methods of creating and working.” The presence of cut-up in The Third Helix is unmistakable. The compositions themselves are dense with granular synthesis, a method of production that breaks sound waves into tiny grains that are then redistributed and reorganized to form other sounds. McDowall used modular synthesizers to fragment and cut audio throughout the album to “yield surprises.”

But McDowall’s canon of work also embodies the cut-up philosophy on a more theoretical level. His productions aim to break perceived musical, cognitive and social boundaries and to plunge the listener into a state in which their understanding of reality has been redefined. “The goal with this record was this alchemical dissolving of something…a dissolving of the templates. I was thinking of these templates being so deeply ingrained in us.” McDowall credited New York-based artist Sigrid Lauren with putting words to what he’d already been feeling for quite some time with a post she made over social media last March:

“Sometimes I forget who I am and where I come from, a blessing & a curse,” the statement reads. “When I forget, I’m free and grow—when I remember, I learn and grow. Extremely grateful to crack the template I was given and become someone/something unlike anyone else even if often that confuses and frightens me. Grateful to escape conventionality, poverty, alcohol/drugs, and the patriarchal hand that reaps. We are really out here attempting to write a new script everyday and that feels necessary. It’s our responsibility to develop our beliefs and how that relates to this backwardsass world. Our responsibility to move our Selves and one another. Social media makes me uncomfortable for the commerciality, the comparability the in-genuine and the non-present but I’m going to try and feel genuine about it again. Excuse my simple English here a simple photo of 2real freaks in London being open to whatever this blessed world serves.”

In McDowall’s and Lauren’s shared view of the world, the dream and the reality of the collective consciousness are inseparable. “For thousands of years, we’ve been handed these templates that basically dictate our existence, and they’re not us. But they’re ingrained so deeply that they’ve become biological now, like a third helix wrapped around the other two, constricting and choking.” McDowall’s The Third Helix, then, is an answer to the “algorithmic hell in which we live,” an assortment of sonic rituals made to unravel the way we experience society and our inner selves.

The Third Helix itself contains a sensory toolkit unique to McDowall. The album successfully marries sweeping psychedelic drone with industrial motifs and experimental flourishes. Even the name of the opening track, “Rhizome”, sets the album’s musical and conceptual tone. The name is a botanical reference to creeping rootstocks that emerge from the bottom of some plants, shooting into the dirt and growing horizontally across plots of land. They’re unseen from the surface but they’re always spreading and reproducing, much like the constantly-replicating patterns of thought and behavioral mores that are passed down through our collective socialization.

The rest of the album provides a churning descent into emotion. It’s full of a focused sense of dread punctuated by moments of nostalgia and exhaustive beauty. The tracks “Impulse” and “Proximity” are perhaps the best representative of his established compositional style; they’re the most drone-driven and hypnotic pieces on the album, each concurrently building and dismantling walls of dark and strobing sounds. The latter fuses ambient synth tones with voices, strings and melodic ambient whirring. The effect is both haunting and wistful, and calls to mind some of the radical sound experiments emanating from other contemporary projects like Amnesia Scanner or M.E.S.H.

But it’s “Tendrils” that, sonically, best exemplifies some of The Third Helix’s primary themes. Buoyant, otherworldly samples float above a menacing tapestry of synthetic soundscapes. The result is eerie, like a serene seaside vista being slowly eclipsed by a dark entity lurking just below the surface.

Each of these carefully-crafted tracks prove that McDowall, who has always been at the forefront of experimental music production, is still a precise sonic architect. They also carve out space for deep reflection and serve as a reminder that sound, music and frequency can have powerful psychoactive effects. They mine a wellspring of ritual, which is unsurprising considering Coil’s historical affinity with spirituality in relation to music—they are known to have used magical practices, sleep deprivation and other profoundly psychoactive techniques during the process of music production—and McDowall’s own pursuit of altered states of mind.

When he was recently working on performing and rewriting Coil’s Time Machines, he attempted to induce psychotropic effects on himself, without the use of drugs, during its creation. “I spent ages dialing in the right timbres and frequencies, and I really felt it was working on me,” he said. “After working on it for a few days, I started to dissociate and go into fugue states. Even when I wasn’t working on the set. I really felt like I was tripping…and I really wanted to continue to go back to that space where music can become overwhelmingly hallucinatory. I wanted to jump back into this pool.”

It’s worth noting that McDowall has also become a recent disciple of Transcendental Meditation, or TM, a form of silent mantra meditation that’s become increasingly popular among musicians and artists in the last couple of decades. For him, the exercise of music making is an extension of his everyday spiritual practice, a routine in which he deconstructs the fibers of everyday life into their most fundamental structures and shapes.

McDowall’s rejection of established categories, both societal and musical, has helped him to successfully and laudably escaped the “dance music” tag in his output. In addition to his solo work, he has embarked on diverse collaborations with Tres Warren of the acoustic guitar group Psychic Ills, Nine Inch Nails, Hiro Kone, the indie band Tamaryn, the industrial duo Wetware and the metal-rock outfit Uniform. He’s also in the midst of recording a release in tandem with Frederikke Hoffmeier as Puce Mary, who’s known for her prolific output of unforgiving experimental noise, as well as an A/V project with Glasgow visual artist Florence To.

Perhaps what makes talking with McDowall—and listening to his music—so comforting is that he knowingly acknowledges his status as an outsider, a feeling that many of us have likely experienced with varying frequency throughout our lives. His work simultaneously depicts a feeling of alienation and hope for a world where our social interactions are more concrete and immediate and our actions aren’t burdened by inherited values or bequeathed standards of behavior.

The Third Helix does not play it safe. It is a bold statement about the state of the world today and an offering to those who, like McDowall, need to release themselves from the strictures of a society increasingly defined by its limitations. “This is my sacrament,” McDowall reflected. “Something that kind of, in a way, dissolves reality. That’s the best ritual.”

The Third Helix was released on Dais Records on September 21. To grab a copy, head to his Bandcamp here. To see more of Seze Devres’ photographs, visit her Instagram.