A bald woman bound in leather restraints looks blankly in front of her as a shrunken figure in a gas mask, elbow-length gloves and a black bodysuit leers over her shoulder. This scene is displayed at Berlin’s fetish dance party at Kit Kat Club in Berlin—but not in real life, although similar situations do take place there every weekend. This particular image is an illustration titled “Insomnia” by the clubber -turned-graphic-artist Felix Scheinberger, who has documented Berlin’s rich underground fetish culture in his 2016 collection of illustrations, Hedo Berlin. His work is currently being highlighted in Midnight Mass, an exhibition at the BLAM Gallery in Brooklyn, New York that focuses on underground club scenes from around the world. Residents and visitors to Berlin can also see his work on the public stage: his designs are consistently featured on the artwork that accompanies the male-only sex party at Berghain, Snax.

Felix Scheinberger’s illustrations capture Berlin’s most elusive—and exclusive—clubs, from the techno monolith Berghain to fetish parties at Kit Kat Club. His intoxicating sketches grant access to hedonistically-oriented spaces that have long remained concealed from the public eye, especially considering that many venues in the German capital ban film and photography in order to keep what goes on there clandestine. “I think that the nightlife and the club culture in Berlin is one-of-a-kind,” Scheinberger told us over email. “It represents something special. For many, Berlin is, at the moment, the unofficial cultural capital of Europe. I sketch the clubs that I go to regularly because I like to capture this special atmosphere.” 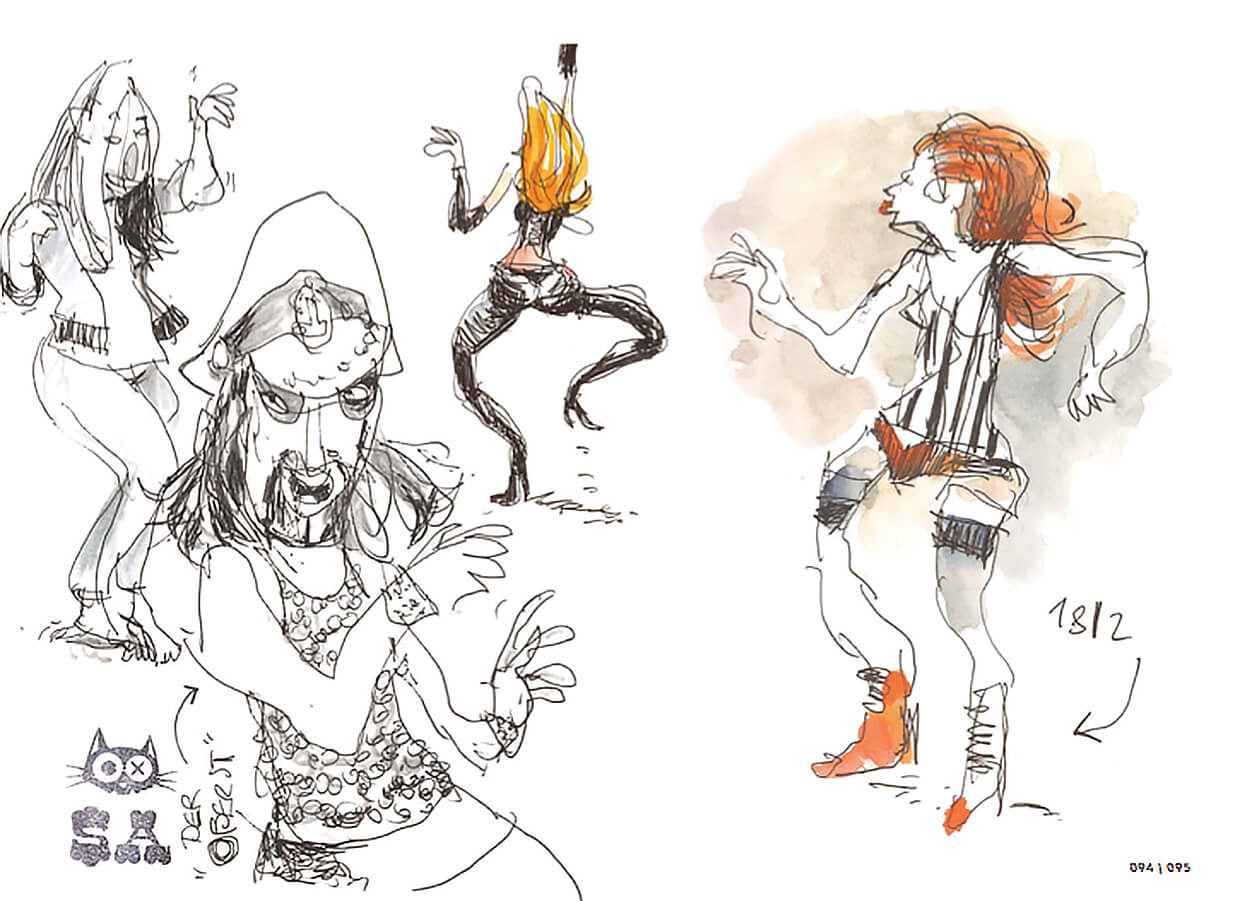 Scheinberger’s characterizations of Berlin’s nightlife culture began a number of years ago when he moved to Berlin from Hamburg, where he studied design with a focus on illustration at the Academy of Design Hamburg. He sketched when he was out during the day, and eventually began to carry his sketchbook with him on nights out with his friends as well. “If I’m in the mood, I’ll just start drawing,” he said. “I like to go out and enjoy Berlin’s nightlife, but I also feel that I need some distance from it. Having a sketchbook with me creates the distance that I need.”

Each Scheinberger piece is dated and marked with the location in which it was drawn, so his collection can be treated as a living document of Berlin nightlife. “All the sketches that I’ve done of Berlin’s club culture have been created organically,” he told us. “I never intended to publish them or to create an anthology. The idea to release my collected drawings actually came about from my publisher, Annette Koehn. I usually produce more ‘serious’ books, like textbooks about illustration for bigger publishing houses, so I really appreciated her courage and ambition to put out such an unusual work for me.” The book even includes a foreword written by Kit Kat Club’s manager, Kirsten Krueger.

His chaotic renditions of party scenes simultaneously evoke a sense of separation from and an intimacy with his subjects. While some of his pieces—like “Panorama Bar”—portray abstract and amorphous masses gathered around a bar or moving lewdly on the dance floor, others represent deeply personal portraits. “Valentina, 24 aus Friedrichshain”, for example, is one of the subjects that Scheinberger chooses to draw in detail; she’s depicted topless and in profile with an oversized nose ring, long blue hair and a smoldering gaze through narrowed black eyes. This illustration, coupled with pieces like that of a faceless woman sitting crouched in a bathtub, her limbs turned inwards, offer intimate impressions of real people while still maintaining abstract and slightly exaggerated style. 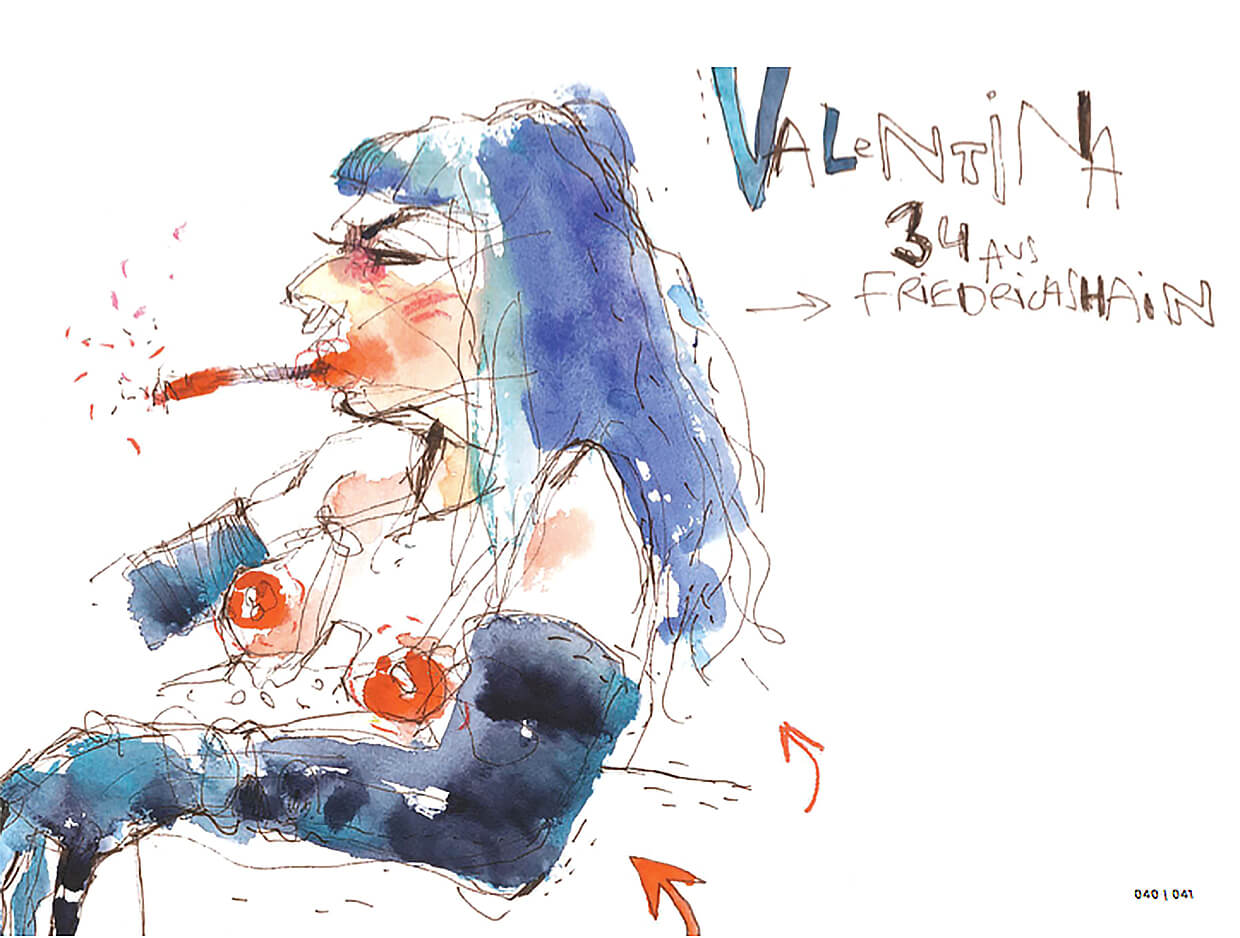 Scheinberger attributes his proclivity for abstraction to the fact that he tries to convey general atmospheres as opposed to realistic portrayals. “It’s important for me to capture the vitality of a moment and the general mood of a party,” he said. One of the pieces that best illustrates this inclination has the caption “BERGHAIN” scrawled over the head of a crudely-drawn man who has only two purple circles for eyes on a small, frenetically-rendered head. The black ‘X’ across his chest resembles a harness, and his body’s grotesque, irregular shape makes him seem either muscular or malformed. The illustration communicates the dark energy and intense movement that might be seen on the eponymous club’s dance floor at peak time.

For Scheinberger, sketches like these capture Berlin’s nightlife spaces better than photography could if it were permitted. “Photography in a fetish club would come across as being deeply disrespectful and almost pornographic,” he proffered. “Drawings, however, mirror the human body in a more sensitive way, and I find them far less voyeuristic than photography. The physical act of drawing makes you observe situations more carefully, and the freedom you have to interpret scenes helps to capture a general mood better, perhaps, than a photograph.” 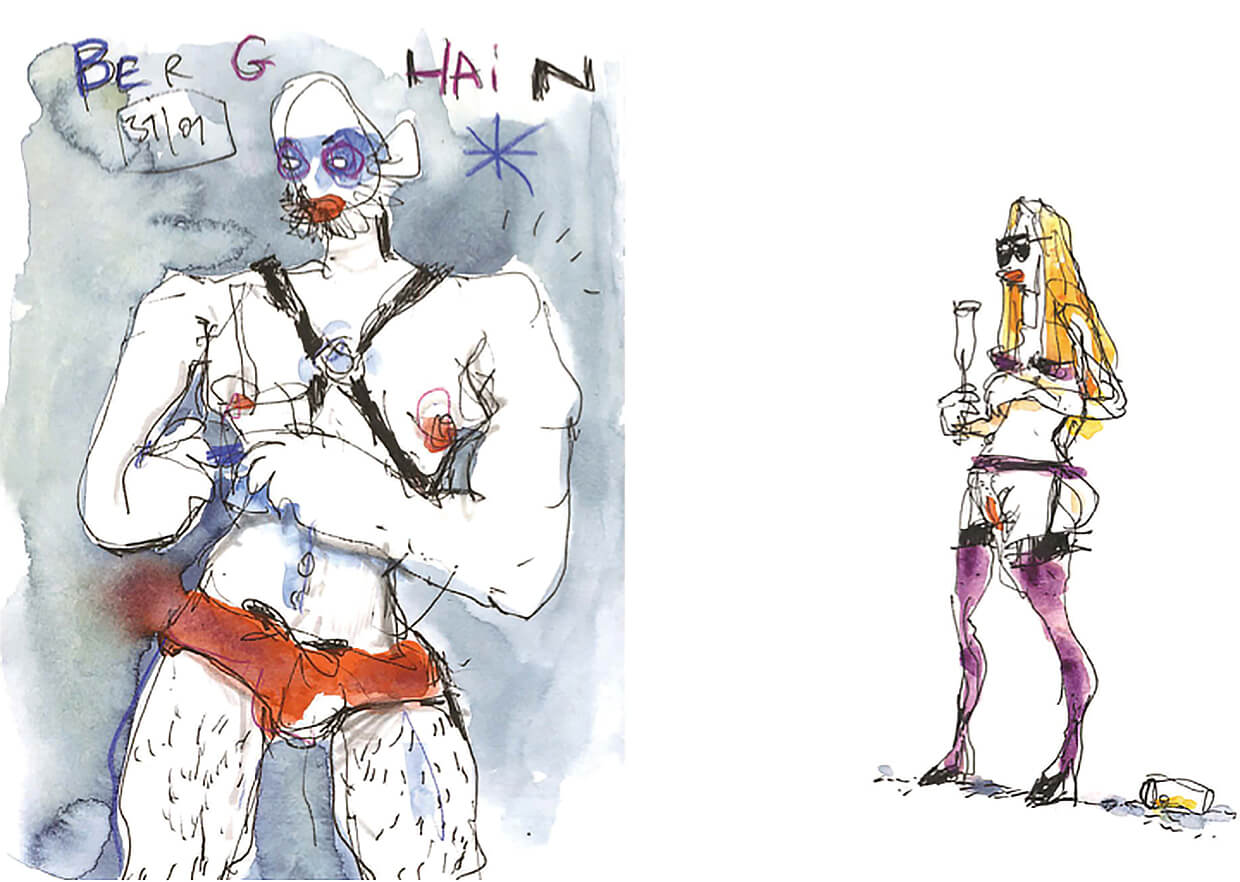 You can purchase a copy of Hedo Berlin from Jaja Verlag here.