Novelty is rare in dance music these days, which is why our eyes bugged out of our heads when we came across DJ Flapjack. To experience the Los Angeles-based DJ’s various social media feeds is to be transported to an alternate timeline where rave culture still has a place for JNCO jeans, slapstick hardcore sounds and brightly colorful graphics.

As we flipped through his various mix videos on YouTube—and our jaws dropped at his technical old-school turntablist tricks—we wondered about this person, and also about the deep underground American hardcore rave scene from which he emerged. TEB contributor Michelle Lhooq, author of Weed: Everything You Want To Know But Are Always Too Stoned To Ask, took a trip to Flapjack’s home in Los Angeles’ San Fernando Valley to hear his story.

On the night I met the legendary Flapjack The Kandi Kid (or DJ Flapjack) last year, I was hanging out at a techno party in downtown Los Angeles when a friend walked in around 5 A.M. “There’s another rave down the street,” he said, “And they’re playing happy hardcore.” Happy hardcore in 2019? Outside of EDM festivals like Electric Daisy Carnival or painfully ironic art-kid parties, I hadn’t heard the saccharine, manically sped-up subgenre in years. Who would be at this rave—adolescents in furry boots? Hula-hooping poi-spinners? Hardcore heads sipping nitrous balloons? Dying to find out, I ditched my crew and popped next door. 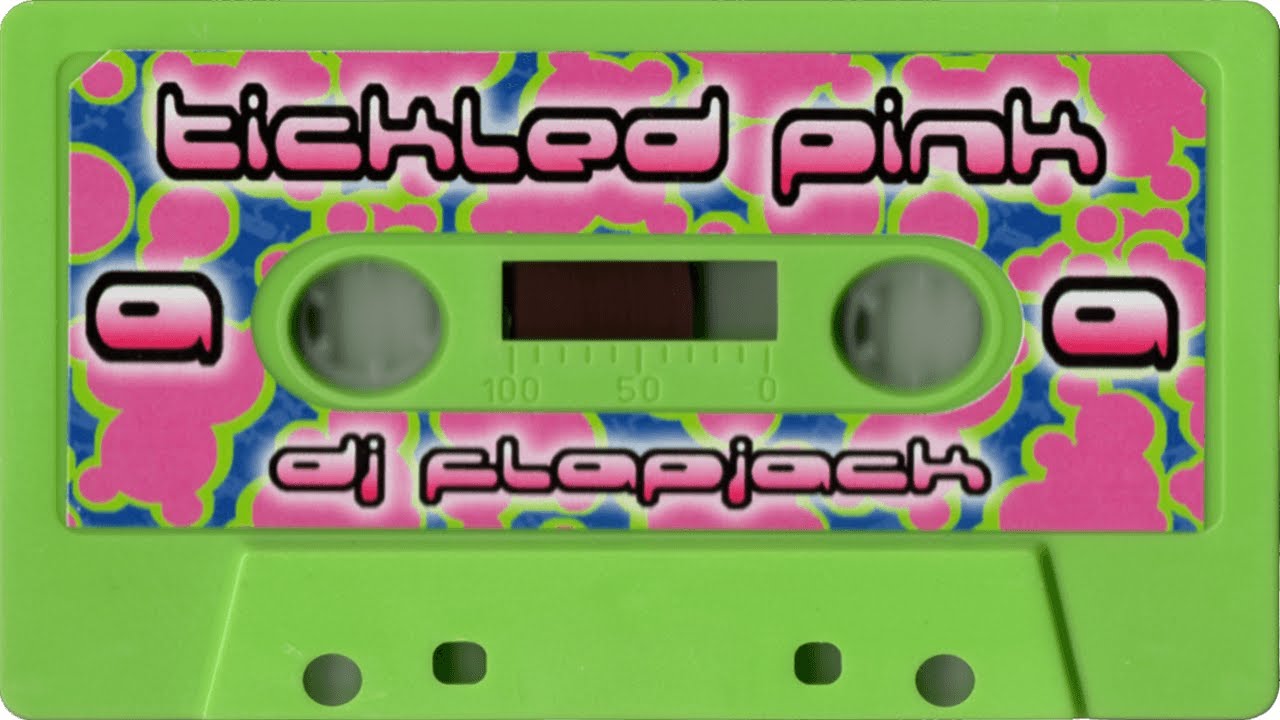 It was nothing like what I’d expected. The first thing I saw was a massive, hand-painted banner covering an entire warehouse wall that screamed: HARDCORE WILL NEVER DIE. An old-school, middle-aged DJ was playing Looney Tunes-esque cartoon vocals over a bass line as rubbery as a bouncy ball. Dozens of young ravers in oversized phat pants and tiny backpacks shuffled around the dance floor. It was as if I’d stumbled into a time warp back to the ’90s, and despite my earlier trepidation, it felt surprisingly…cool?

Flapjack, or “Flap,” as his friends call him, was standing by the door, handing out flyers to his next rave. A pair of goggles rested on the his spiky blonde hair, and his baggy JNCOs swayed on the floor like curtains. After I introduced myself, he flashed a dimpled grin and told me the party was supposed to take place in an abandoned tunnel, and they’d had to change locations at the last minute because of (what else?) cops. Ever since that night, I’ve kept running into 25-year-old Flap at parties, and I’ve since learned that he’s like a rave Pied Piper: wherever he goes, colorful kandi kids seem to follow. Yet I didn’t grasp the extent of his encyclopedic knowledge and obsessive passion for California’s underground rave culture until I paid a visit to his home on a sunny May afternoon.

Flap lives with his family on a quiet, suburban street in the Valley—a largely middle-class area of Los Angeles lined with manicured lawns and modest brick houses. Answering the door in a baggy T-shirt and ‘90s rave pants—Flap is never out of character—he ushered me into his room. Walking in, I felt like I’d stepped into a DIY rave museum. The walls, lined with bright neon fur, were plastered with hundreds of flyers from raves he’s attended. His wardrobe was filled entirely with ‘90s streetwear from labels like Clobber and Kikwear; shelves were stacked with hundreds of cassettes and vinyl records organized into categories like “classic happy hardcore,” “Dutch happy hardcore” and “Makina.” Every corner of the room brimmed with rare rave memorabilia, including promotional VHS tapes from Electric Daisy Carnival in the ‘90s, a vintage board game called RAVE and magazines like The Hard Data and Raver’s Digest.

Pointing to a flyer on the wall—”that was my first rave!” he exclaims—Flap told me he started going to raves when he was 15 because he wanted to learn how to be a better dancer. “I was in theater, and one summer I became six feet tall,” he recalled. “I was like, ‘fuck my legs don’t work! I went to dance class, but they were really strict and made me feel self-conscious.” His friend’s older sister suggested that he should go to raves, so he convinced a friend to tag along, called a rave info line to get an address and asked his mom to drop him off at a warehouse down a sketchy alley in downtown LA where hardcore DJ Scott Brown was headlining. “It was the best thing ever… it was amazing!” Flap exclaimed, eyes twinkling. “I was like, ‘whoa, everyone accepts you. And the music—this is the best. ‘I gotta go to every rave all the time now!’”

Diving into Los Angeles’ rave underworld, Flap sometimes travelled hours to attend illegal parties everywhere from San Bernardino in the Valley to the deserts outside Los Angeles. At first his parents—both of whom are in the music industry—were concerned about the scene, but Flap said they chilled out once they came with him to a rave and saw that it was safe. Another reason why his parents don’t have as much to worry about: Flap has never been drunk or high—a relatively surprising fact that, to me, makes his love for the rave that much more pure. Flap told me he used to lie and tell his friends he was allergic to drugs so he wouldn’t get peer pressured, but now he’s doesn’t think about his sobriety at all. “I have an addictive personality, as you can see—I have 400 pairs of rave pants and 2500 records,” he said ruefully with a shrug. “I have an idea of how good most club drugs are, and if I kinda liked ecstasy, it’ll be… like that.”

Flap started hanging out with old-school DJs from all over the country, who he’d meet while hanging out at renegade raves and radio shows. These DJs gave him his first records to start his own collection; later, when he started DJing, he’d offer to buy their entire collections off them. From the start, Flap gravitated towards happy hardcore, explaining that there’s a delicious irony in its overwhelming positivity. “My friend said this to me once, and I’ll never forget it: ‘I like happy hardcore because it’s overly happy when the world is in shambles and everything is fucked up.’” He paused dramatically. Then he added, “If there was a horror movie with a happy hardcore soundtrack, it would somehow be even scarier!”

In a way, Flap’s unbridled enthusiasm reminded me of happy hardcore’s manic energy—he often talked in fast bursts, eyes wide as saucers while clasping his hands to his head as if his brain was exploding. Every other sentence ended with an exclamation like “THAT’S SO CRAZY!” or “THIS IS THE COOLEST THING EVER!” or simply “WHOA–AHHH!!!” But Flap’s love for rave culture goes deeper than having a deliriously earnest attitude or pseudo-nostalgia for an era he was too young to have experienced.

“I don’t wish that I was born in the ‘90s,” he told me. He wouldn’t have had access to the wealth of obscure music he’s been able to discover through the internet back then, when people had to drive across state lines every weekend just to hear a particular record. I pointed out that rose-tinted ‘90s rave nostalgia also often overlooks the racism, sexism and other forms of prejudice that was commonly accepted back then. He nodded. “We have a lot more conscious society now—especially in the last few years,” he agreed. Plus, technology has improved so the zippers on his newer rave pants don’t melt in the dryer.

Flap loves ‘90s rave culture because he sees it as a pre-commercialized, DIY era when artists were doing things for the sake of fun and experimentation—not because there was lots of money to be made. Clobber streetwear, he explained, was sold out backpacks at raves by kids who were making dorky shorts for their friends. Music producers would stay up and record snippets of TV shows—like a Beavis and Butthead line that goes “A bunch of dumbass wussies hitting a stupid drum!”—to create clever samples for a hardcore track in unexpected and tongue-in-cheek ways.

“The reclamation of pop culture, bastardizing it and turning it into an underground joke—that shit is so cool!” Flap said. “There was such a huge culture of sampling and mixed media that became illegal when Napster went down, and huge labels were like, ’we’re not going to make billions anymore so we have to stop it.’ Rave wasn’t throttled by EDM yet back then, and there was freedom because it was new.”

The sunset was creeping below the horizon and his parents were going to be home from work soon, so Flap peeled himself off the floor and offered to show me the garage—where his collection of rave pants was stored—before I had to go. But before we left his room, he showed me the latest flyer he was making for his next rave. The party was going to be bubble-themed, and true to the spirit of ‘90s raves, he had made a call-in hotline for finding out the party location and was planning on giving out handmade mementos of colorful bubble bottles full of candy to everyone who came. “Rave is about finding loopholes to everything and exposing people to weird art that wouldn’t otherwise have that outlet,” he concluded with a megawatt grin. “There is no place in a nine-to-five job to wear a five-person fuzzy caterpillar suit.”