In the East Legon area of Accra, Ghana, there is a slated wooden bar named Dr. Splash that sits on Boundary Road, one of the main two-lane thoroughfares that bisects the residential town. Dotted throughout in the surroundings is the occasional lazy palm tree, but the nondescript building is largely surrounded by asphalt and concrete. Due to the COVID-19 pandemic, it’s turned into something of a low-key, members-only spot, open only to close friends of the owner. It is here where Gafacci and Rvdical The Kid, two producers and DJs based in Accra, often find themselves on Fridays now that clubs face an indefinite hiatus. This is not to say their weekend nights are any tamer; Gafacci facetiously refuses to discuss what he did during his last outing at Dr. Splash, offering an elusive, “We can’t speak on it. We broke the law.” Rvdical affirms, his eyes shifting sideways in suspicion as he says, “We did some illegal shit”—later revealed to be consuming edibles.

Though they live a five minute walk from one another, which they sheepishly admit to me later, Gafacci and Rvdical dial in separately into the Zoom conference. During our conversation, Gafacci remains a stubborn black square icon, pointing to his reserved nature—a personality completely at odds with the boisterous, global club anthems on his breakout EP Face the Wall, that bridges traditional Ghanaian percussion with the glossy brio of modern electronics. Rvdical, the more extroverted of the two, sports a grey sweater with black squares as he paces back and forth across his apartment, carrying the two of us on his phone. His output has gradually moved away from electronic music, veering more towards laid back—but still buoyant—hip-hop beats adjacent to those of Soulection. His sophomore release, Little Planet, which dropped a week ago, synergizes plucky synth pads against the mellow groove of 808s. Ghanian singer Amaarae, also a collaborator of Gafacci’s, lends her breathy vocals to his second single “NASA,” rounding out Rvdical’s project like a last sigh of summer flushed with golden hour nostalgia. 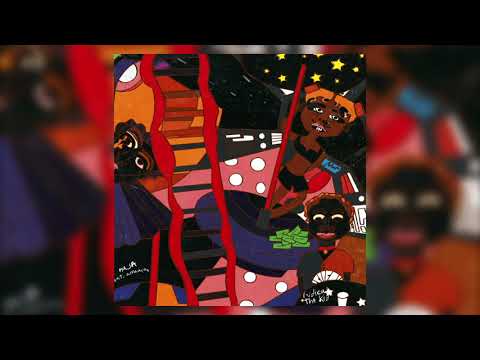 Though they’ve taken different routes in their production careers, the two easily reminisce about the early EDM scene that sculpted their formative teenage years. Gafacci mentions dubstep progenitors Rusko and Skrillex, to which Rvdical exclaims, “Bro! You’ve just taken me back. Do you remember Chase & Status?” Gafacci nonchalantly mentions owning their albums before telling me his truant childhood in Ghana frequenting movie complexes instead of school and watching Bollywood, Chinese, and American films back-to-back for up to twelve hours in one day. During the commercial breaks, he says, the cinemas would play ‘How Much Is the Fish?’ by Scooter, as well as techno, house, and hardcore in between movies, sparking his interest in electronic music production.

Rvdical was born in Nigeria, raised in the Benin Republic, and moved to Accra in 2016. When he grew up, his father was the family selector, listening to Nigeria’s finest: Fela Kuti and King Sunny Adé, mix in with Western megastars like Kenny Rodgers, Phil Collins, and Celine Dion. But on his own, Rvdical got into East Side Boys, Trick Daddy, and Three Six Mafia—a period of obsession with southern rap that he believes inspires the light bounce in his compositions today.

In 2017, the two met through a mutual friend DJ Keyzuz, who threw “No Requests,” a party for DJs to explore their musical range without audience intervention, at the club El Loco. Both were booked on the line up, but didn’t get close until they traveled to Spain and Germany together with 12 others as part of Buzz meets Biz, a Goethe Institut exchange program for music business development. Before he met Rvdical, Gafacci says, he was “too one-dimensional” with what he’d listen to. He’d create experimental music, but then go back to playing to Evanescence and Van Halen. “When I started making beats, I’d forgotten about just being a fan. Every time, I would get too technical, enjoying the first 50 seconds, but, one minute in, I’m all surgical with music, like, ‘Oh here’s where the kick is great. This is how the bass was played.’” Rvdical showed him future beats and house, and would drop tidbits of music history with all of the tracks he shared, opening Gafacci’s ears to new listening patterns.

Their relationship is characterized by a broadening of musical boundaries, in form and function. “When I went to the Face the Wall EP launch,” says Rvdical, “[Gafacci] was giving a whole step-by-step narration of how the whole project came together and what the project meant to him. For me, I didn’t think that a lot of people gave that much thought to their projects. I was super impressed, and it pushed me to want to be more intentional with the way I approach my music.” His Little Planets EP is the product of “digging deeper” into his personal sonic messages. “Gafacci helped me with that,” he admits. “He doesn’t know, but he did.”

Oddly enough, this B2Beats mix is a rare form of collaboration between the two that has seen the light of day. They worked on an unreleased track for Gafacci’s upcoming album, but Rvdical says, “I have a load of musician friends that I’ve never made music with and I’m ok with that because I don’t think our friendship needs to amount to or result into music creation. Despite Gafacci’s desire to create music with me, I’ve just not been pressed about it because he’s not going anywhere anytime soon. But, when it happens, it’s going to be a magical moment.”

While not as involved as a co-production, the mix glints with the kind of charm he speaks of. Rvdical tosses in Pan-African dancefloor gems like “Dumebi” by Nigerian singer Rema and the hypnotically sweet hip-winder “Amantombazane” by South African outfit DJ Maphorisa and Kabza De Small—songs best suited for the full tilt of a sweltering season. Meanwhile, Gafacci peppers his global club sensibilities throughout, building up the strumming heat with tracks by Portugese producer Branko (of Buraka som Sistema and Enchufada) and a flip of Busta Rhymes’s “Get Down” by Brazilian baile funk artist VHOOR. The medley of sounds feels like what one would listen to on a woozy August night after knocking back a few drinks or maybe noshing on an edible. It’s as of-the-moment as some light-hearted debauchery during the peak of summer can be.