On October 5, Kraftwerk quite literally landed their spaceship at the Masonic Temple in Detroit. At least, that’s what we saw projected on a screen in 3D during “Spacelab”, and the crowd erupted in joy. It was a scene that only the Electrifying Mojo could have predicted, one steeped in kitschy sci-fi references, ’50s-era cardboard 3D glasses and the imagery of Parliament Funkadelic’s mothership. Much like the blood moon lunar eclipse, the rare presence of Kraftwerk in Detroit eclipsed the egos of the city’s techno scene. Everyone was in awe. For Detroiters, it was a proper techno holiday.

Every generation of electronic music fan attended, and some brought their children. Members of the Belleville Three and their progenitors were there, as were members of Underground Resistance in their Detroit auto worker’s uniforms. For that one night, history lived and breathed.

Unlike the venues that hosted previous Kraftwerk performances in Detroit, we were seated in a once-glorious theater that matched many of the group’s aesthetic touchstones. People often call Kraftwerk futuristic, yet are unaware of how historic the future they represent is. Kraftwerk’s future happened in the ’20s and ’30s, with the Modernist movements and Streamline Moderne. The cover art Emil Schult designed for them was vividly incorporated into the show and referenced Russian Constructivism, De Stijl, Bauhaus, the color theories of Joseph Albers, the Cold War sci-fi space exploration of films like Forbidden Planet, the silent futuristic vision of Fritz Lang’s Metropolis, the pop art of Andy Warhol (and his hilarious giant pocket calculator) and the op-art of Victor Vasarely—in other words, some of the greatest hits of the 20th century. Theirs is the future we never reached: the future of gentlemen. In this era of dystopian visions, it’s wonderful to see and feel a concept of the future that’s still hopeful and full of wonder. 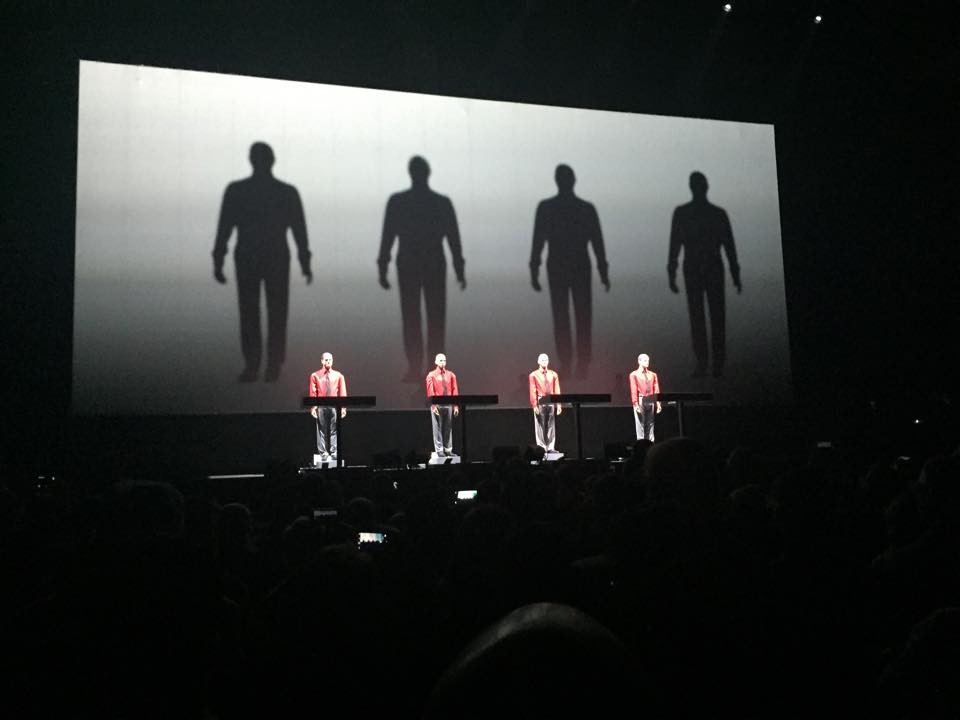 All of these references became 3D as the show progressed. “Numbers” had the most striking visuals; digits actually flew above the audience. The four matching podiums in front of each member lit up and changed color, making the 3D depth of field even richer. The energy in the audience was palpable, and the group responded to the crowd’s enthusiasm by giving a truly electric performance of highlights from Computer World. The old future still stands up, and these classic keyboard lines still connect and inspire.

What we saw that night was culmination of a lifetime of work. It wasn’t the original Kraftwerk, but the Kraftwerk that emerged when technology enabled them to perform multiple live shows without the horrors of their vintage analog equipment overheating and malfunctioning on stage. As equipment became more portable, the Kraftwerk live vision came into being. Today, Kraftwerk live includes only one original member, Ralf Hütter, who’s half of the band’s creative nucleus. The other half, Florian Schneider, doesn’t want to tour anymore. Though so much of Kraftwerk is the pair’s shared vision, Ralf has fashioned a strong live concept without him, enlisting engineers and longstanding collaborators Henning Schmitz and Fritz Hilpert for basslines and rhythms and putting Falk Grieffenhagen in charge of the live visuals.

There were a few errors and dents in the armor: a mouse cursor appeared on screen, and sometimes the soft synths pads and melodies sounded harsh when they stacked up, but we overlooked such minor flaws. For over two hours, Kraftwerk dazzled us with the finest tunes from their catalog and presented them in quite an interesting way. They began with their fastest electro cuts from Computer World, then slowed down for the ballads “The Model” and “Neon Lights”. Then they took us through the spacier parts of Man Machine revealing the true emphasis of their groove, before exploring the slower, funkier sound of tunes like “Trans Europe Express” and “Metal on Metal” and culminating in the techno-fied vision of “Tour De France”. The highlight of the show had to be the updated Fukushima version of “Radioactivity”, where the group’s often vague but ever-present political views came to the fore in huge letters on the screen—“STOP RADIOACTIVITY”—citing Tschernobyl, Harrisburg, Sellafield, Hiroshima and Fukushima. The crowd reacted by finally standing and dancing in the isles. Kraftwerk’s views are not only still relevant—they also still make people dance.

Their first encore was “The Robots”, and the crowd went wild as robotic avatars performed in place of their human doubles. The combination of strobe lights silhouetting the robots and the visuals onscreen created one of the most striking moments of the show. Who else could pull off an automated encore and receive such enthusiasm? They made further connections to Detroit during their second encore, “Planet of Visions”, with giant letters on the screen syncing up with their vocoder-treated intonement of “Detroit Electro, German Electro.” They closed with the full A-side of Electric Cafe, which resulted in a standing ovation. With the incredible sound, pacing and simplicity of their often witty visuals, it felt like the full vision of Kraftwerk was finally achieved.

The mutual bond between Detroit and Kraftwerk was further highlighted at the after party at the Museum of Contemporary Art and Design (MOCAD). Organized by Juan Atkins, the night celebrated not only the influence of Kraftwerk on Detroit techno, but the inception of Detroit techno in and of itself. Atkins invited all the members of Deep Space, a historic Detroit party crew founded by himself and Derrick May, to perform. The group eventually grew to include Eddie Fowlkes, Kevin Saunderson, Art Payne and Keith Martin.

In an almost unbelievable feat for a Monday night in Detroit, there was a huge crowd inside and an equally huge crowd outside trying to get in. Everyone was there, from scene originators who predated Transmat and Metroplex to the first person who sold me records at Buy-Rite and the youngest kids who’re pushing the local scene forward, with many people dressed like the cover of Man Machine. It really was something for all generations, another rarity that made this night even more historic.

And there were Germans. Dimitri Hegemann of Tresor (who hosts Atonal Festival in the Kraftwerk building) was there, losing a bet that the members of Kraftwerk would not show up. To his surprise, all four members came and enjoyed a warm reception in the VIP zone, and during Kevin Saunderson’s performance, they stood behind the DJ mixer, almost smiling and causing the crowd to explode at the thought they might be collaborating. That actually happened—though neither act knew at the time—many years ago, with the creation of Detroit techno. As Derrick May famously said, “It’s like George Clinton and Kraftwerk are stuck in an elevator with only a sequencer to keep them company.” Saunderson, incidentally, is known in Detroit techno myth as The Elevator.

The night was full of classics. As I heard one partygoer say, “Sometimes you need to hear it again because you forget its power!” The sound was thick and rich thanks to the Audio Rescue Team, a group of Detroit rave pioneers responsible for some of the more thoughtful sound engineering at local events. Eddie Fowlkes’ futuristic house set, which was deeply rooted in black American music, was a highlight of the night. He even incorporated a forgotten influence, the Jackson 5, who helped popularize the robot dance in 1973 with “Dancing Machine”. The most magnetic and electric set of the night went to Derrick May—as it often does. He destroyed the dance floor with his live-editing style and classics such as Chip E’s “Like This”.

The night closed with the first man of Detroit techno, Juan Atkins. In contrast to May’s highly Chicago-influenced style, Atkins’ set integrated many of the classics that have influenced his sound, but was totally bereft on any non-Detroit influence. Its power and melody fell completely outside the Chicago code, leaning more toward the Moroder and Kraftwerk axis. He killed the dancers with diverse jams like Moroder’s “The Chase”, Electra’s “Feels Good (Carrots and Beets)”, his own “No UFOs”, Red Planet’s “Stardancer” and Derrick May’s collaboration with D Wynn, “R Theme”, which he mixed into “Der Klang Der Familie”. When he played Kraftwerk’s “Numbers”, I actually saw them smiling while it devastated the crowd. As he finished his set around 2 a.m., Juan got on the microphone and said, “Detroit, we love you.”

It was a perfect end to our perfect night, where everybody not only believed in the music, but felt the power of it. It wasn’t history; it was a living testament to the incredible sounds that these innovators created and how those sounds endure.