I spend most of my nights out DJing at dark, cramped Berlin clubs, but two weeks ago I ventured out of my techno bubble to attend a U2 concert. In high school I played in a band with Bono’s nephew, and he helped grant me access to one of the megaband’s recent shows of the worldwide iNNOCENCE + eXPERIENCE tour, many of which are documented on this YouTube channel. The one I went to was the third of four dates at Berlin’s Mercedes-Benz Arena, formerly known as the O2 Arena, which sits conspicuously across the train tracks from Berghain. I’m more comfortable in basements than arenas, so I was a little cynical of the occasion. But I was curious to see what I could glean from a Premier Rock Music Experience in 2015, and the following is my account of how it went down.

Before the show I’m standing in a well-positioned, cordoned-off VIP zone at stage right, and I immediately notice that almost everyone around me is American or Polish. This might have been an illusion, because representatives of those nations were quite inebriated and vocal well before the show began, and perhaps the Germans were shamed into silence. Meanwhile, a crumpled little man slowly shuffles between patrons, bent double by a backpack of beer. He has the countenance of a biblical mule. A Polish guy grabs him by the shoulder and drawls emphatically, “I’ll give you 2,000 Euro to stay right here all night.” An equally sloshed American overheard this proposition and chimed, “Dude, you’re speaking my language!” The duo strike up a charming rapport as the hobbled beer dispenser ekes out some frothies. Unfortunately, one cup is filled only with foam. The beer supply is gone. The Polish guy looks down at the cup, back up at the sky, closes his eyes and delivers his best Bono impression: “One love…One beer!”

The really serious impersonators of U2’s frontman are German executives, who seem to have a mania for parading around in Bono-esque regalia. I spotted a guy direkt von Buro in a pair of fluro-green cyber alien sunglasses, which nicely offset his trim baby blue shirt and expensive nondescript jacket. In contrast, an old, hefty, white-bearded truck driver in shorts was hoisted 30 meters into the air via a system of pulleys. He will be triggering lighting cues while sitting on a precarious metal beam for two hours. He’s nonchalant as he slowly disappears up into the rafters.

It’s strangely cool in the Arena. I’m used to sweating in a mosh pit or the club, so I found the curiously-manicured climate unsettling, like we were lettuce in a vegetable crisper. At one point the crowd fired up the wave, and it circumnavigated the venue a staggering eleven times. I counted. 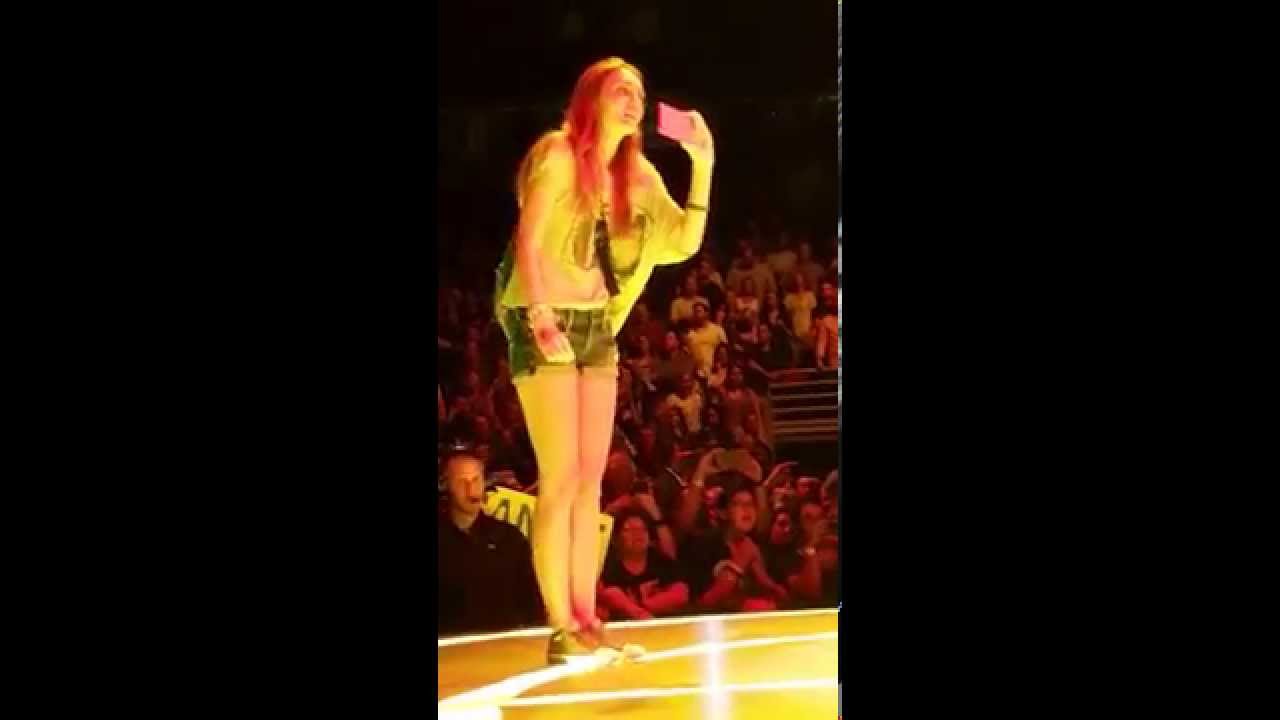 When the band finally appeared I was taken aback by the sound. It was like the arena was filled with hissing, sizzling metal, and it sounded curiously like a band playing, which I hadn’t expected. A few hours before I’d been treated to a tour of the stage so that I could gawk at the severe technical majesty that is a U2 concert. Here’s some details that will give you a sense of the whole mechanism: They have a fleet of engineers, each of whom has a huge digital mixing desk with which to perfectly tailor the sound going into the ears of each separate band member. After having a look at the Edge’s guitar collection I tried to do the math and estimate its total worth, but I lost count somewhere above a million. There’s a pile of books that included A Clockwork Orange and a lot of Yeats, and it’s sole purpose is to allow Bono to rip out pages and throw them into the crowd while thousands of other pages descend from the rafters. The crew bulk buys thousands of copies of the same books so they can have their wisdom shredded and dispersed on people around the world. Looking at Larry Mullen’s drum set, I remarked on the lack of digital triggering devices (for playing electronic samples and such) but then a tech guy politely corrected me by saying, “they’re invisible.” Another engineer gestured at a pile of subwoofers and said, “One of these can destroy the foundations of a small building,” before pointing to innumerable other stacks of sonic firepower. I expected the most immaculate sound, yet the venue itself wouldn’t allow it, despite the fact that U2 has every possible resource at their disposal. It’s literally a case of being too popular to sound good.

After the first song, an American guy next to me turned to his friend and remarked, “It’s an unbelievable mix of old and new…I’ve never felt it like this before.” Bono introduces the next number with a touching homage to his prematurely deceased mother while the wasted American is escorted out by security, much to the chagrin of his new Polish friend.

Later the band disappeared inside a giant screen for about 15 minutes, leaving audience members confused and the energy deflated. I heard someone ask their friends, “Is this the intermission?” before they scurried out. After a while avatars of the band appeared on a screen and the crowd got a little bit more excited. U2 mediated through a screen is better than no U2 at all.

A key tenet of this tour was location specificity and here it was in action. Following a stirring video montage of destroyed Middle Eastern cities, Bono praised Germany’s response to the refugee crisis. A digital Berlin Wall complete with signature solidarity graffiti symbolically splits the crowd in two. The Mercedes-Benz Arena lies directly opposite remnants of the actual Wall, and the effect of the band’s gesture was quite something. “See how easily established and arbitrary such boundaries are!” said the famous band to the city that lived through it. As the music gained intensity, U2 finally reappeared from within the Wall; indeed their energy seemed to trigger its disintegration, leading to a jubilant multimedia moment of unity.

Then Bono pulled a young woman onstage. He gave her an iPhone whose camera was linked to the giant screens in the venue and live to the Internet. The crowd’s attention is transfixed on the screen while she films the band up-close-and-personal. There’s something about seeing U2 through the lens of a ubiquitous mass consumer product that feels paradoxically intimate. Seriously, you could feel the mood of the crowd change like this was a unique and special opportunity. It was as if seeing U2 through an iPhone brought them closer than ever before. I felt it too. Once the young woman filled her allotted stage time, Bono graciously invites the Edge to “take this lady out.” 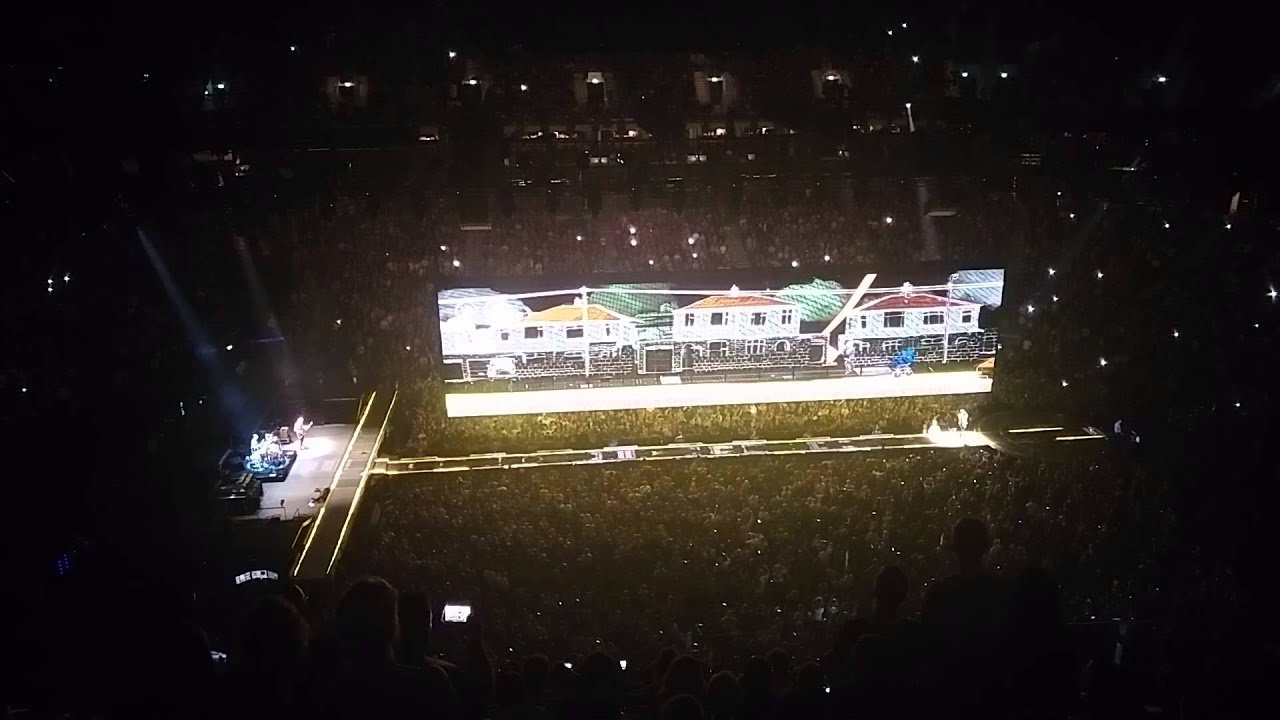 My personal highlight of the evening, and perhaps its defining moment, occurred during “Bullet the Blue Sky”, which is basically U2’s version of “When the Levee Breaks”. There’s a spoken-word section in the original that was extended and altered for this live show that Bono used to enter into an interior monologue with his 19-year-old self. “I can see a boy,” he says, gazing into the depths of arena. “He looks a lot like me. He’s 19 in Dublin, and he’s angry.” Bono’s internal projection berates his current self about his life of excess. “You’ve got too much money!” Young Bono chides. “What happened to your principals? You’re a fraud.”

Bono can only protest as his youthful double touches on the crux of U2’s much-discussed descent into hyper-capitalism. He says something about being separated from his younger self by barricades—he’s describing some chaotic street riot scene. But then the band gets louder and more intense, Bono’s exhalations become more fevered and rapid, the clamor builds, he sprints down a runway yelling indecipherable phrases and then BAM! The song is over, Bono assumes a Christ pose and all is resolved. It’s clear that there has been some sort of positive resolution to the tension between past and present Bono, but all the finer points are lost in the spectacle and only the emphatic gestures of stadium rock remain. The details are clearly of no import. Bono concludes, “I’m not dangerous. I’m endangered!”

After the show I stood on one of the arena’s viewing decks and looked out across the tracks at Berghain. I thought of the few thousand people who pass through its well-guarded doors every weekend. Then I thought about this sold-out, 15,000-capacity U2 gig. Then I thought of the other three U2 shows happening in Berlin. Then I thought about how this tour will run for three years and all the other cities it’ll visit. Add U2’s multiple decades of decadent globetrotting and you’ve got a juxtaposition that puts things in perspective. We get so wound up about the possibility that Claire Danes might ruin our unsecret subculture that we forget how small and insignificant we really are.