In 1977 when the Sex Pistols were spawning angry three chord reactions against the pomp of prog, a young Jean-Michel Jarre was enjoying the success of his first LP Oxygène­­—the kind of spacey, analog synth exploration punk supposedly sought to destroy. Jarre, a former student of Pierre Henry, would go on to sell 80 million records over his forty-year career and has experienced a critical reassessment of late. His recent collab-heavy LP Electronica 1: The Time Machine ambitiously seeks to tell the history of electronic music…with electronic music!

Jean-Michel Jarre: That’s right. They are my heroes. I am proud that they were all willing to participate. I see it as a great honor that they all loved the project.

Strangely, the most iconic of all possible collaborators is missing.

Who do you think would that be?

I would have thought the first composer you’d reached out to would have been Pierre Henry, who is considered to be the last living godfather of electronic music.

OK. Let’s cut the preambles and really start talking then. You’re absolutely right. Pierre Henry is it. I actually will meet him again very soon. For various reasons that should not be part of this conversation, it wasn’t possible for him to work with me on Electronica. But we met a couple of times over the last few months and discussed the possibility. When we met for the last time in June, he proposed to collaborate on the second volume of Electronica that will be released in April 2016. Pierre Henry is very old, you know? He needs a lot of time to rest, and I am more than willing to respect his slow schedule. Suffice to say that I am very, very busy all the time so that this particular collaboration turned out to be the most complex and the most difficult to set up, even though we both live in the greater Paris area. I can only hope that this collaboration will finally see the light of day as I consider him the last man standing.

As a young man you studied under Pierre Schaeffer. Can you tell me about it?

He laid the foundation for everything I have ever done. By inventing the concept of musique concrète, Schaeffer created the theory of electronic music, and we all should eternally praise him for that. He was the one who defined music’s single most important evolutionary step in the 20th century by saying that there can be music beyond notation and sheet music. He basically introduced the idea that concrète sounds should also be considered music. Music is sound. That was his message. And as we all know, this concept changed the shape of music fundamentally. Every electronic musician, every composer and DJ is a sound designer nowadays and thus a grandson of Pierre Schaeffer.

But Schaeffer wasn’t only dry theory.

You’re right. To prove his theory right he took a microphone and went out into the city and recorded whatever he heard: a barking dog, the sound of the heavy rain, a train passing by, the wind blowing. With these concrète field recordings he started to compose music. 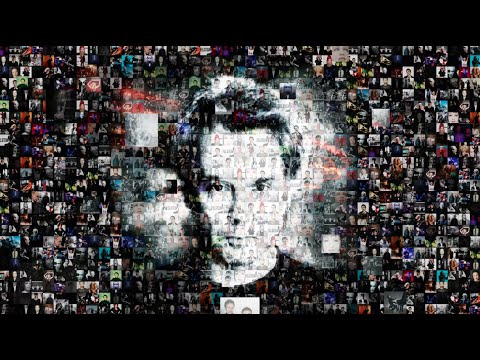 So, when Kraftwerk recorded the airflow from the inside of a moving car to generate the hissing sound in their song “Autobahn”, you’d call them Schaeffer’s “grandsons” too?

Yes. Between noise and music there’s just the hand of the musician. As opposed to Schaeffer, Pierre Henry was more like a hands-on composer and less interested in concepts. When together they changed the definition of music in the late forties, they were like yin and yang. And don’t forget the music of Eliane Radigue who, since she is a woman, is often overlooked in this context. But more than anything else we should understand that electronic music came from all sides of the frontier and, in a way, also helped us to forget World War II: Germany, with Stockhausen’s Studio für elektronische Musik in Cologne, and France were the epicenters of electronic music. Italy’s Luigi Russolo formulated the manifesto L’arte dei Rumori [The Art of Noises] for the futurists and Russia’s Leon Theremin invented the first instrument that would generate entirely electronic sounds.

Electronic music evolved out of continental Europe’s classical music tradition whereas rock music and jazz are derivatives from an Afro-American origin. In that sense, electronic music looks back onto a massive heritage. And regarding my person, I had two choices: I could have either become a composer of contemporary experimental classical music or the electronic musician that I eventually evolved into. In the early ’70s I started to experiment with ideas and concepts of pop and progressive rock and voilà—that’s when I wrote Oxygène. From there my music has become part of the collective unconscious. Every musician seems to have an opinion on Oxygène—be it the late Edgar Froese from Tangerine Dream or younger artists like Boys Noize, Air, Gesaffelstein or musicians from the Berlin techno scene.

It’s interesting that you place the beginnings of electronic music at almost at the same time as abstract painting.

We’re talking about modernism here. And in this context I would call myself a modernist. I feel so privileged that I have been, just by coincidence, born into this century where I could basically witness the beginning of a phenomenon. When I started to make music, the first synthesizers had just been invented. When I started to compose electronic music it felt like walking in virgin territory. It was fully innocent, naked, with no references and no direct influences. That is the ultimate luxury you can have as an artist. Nowadays, when young musicians start to make electronic music, they face a long heritage. They’re influenced by everything that has been published before and by definition cannot be pioneers anymore. Having said that, there still is a lot of interesting music being released year after year. And to tell you the truth, If I had the choice, I would love to live 100 years from now. Maybe I would make music with implants in my brain that directly translate what I am imagining into music? I like the idea of traveling without flight cases, saving air freight.

But wouldn’t you agree that the future has already begun? No one has to learn an instrument anymore to translate a musical idea into real sound.

When I did Oxygène in 1976, I recorded it in my kitchen in Rue de la Trémoille. It was basically a home recording, as I actually didn’t have much money at all. I only owned seven or eight instruments, among them the ARP 2600, a Farfisa organ and Korg’s Minipops 7 drum machine. But with the success that came with Oxygène I was able to invest in more and better gear. Never forget that limitations are very important.

Limitations forced you to become creative?

Yes. The trap of technology these days is that it makes everybody believe that it is a luxury not to have any limits. In a Faustian sense this is true. To break that pact with the devil you have to force yourself into limitation. My advice to young musicians and producers is therefore to start by carefully choosing one plug-in and to then explore this one feature for six months. Take nothing else, don’t stop until you really master it. It’s like educating a child: You better give it a rigid framework. But within this frame make sure to give it total freedom.

That sounds like potentially sound advice. Do you have any more to offer?

Always keep in mind that the history of electronic pop music only started forty years ago. Every relevant work of music that has been released in these years was important because it surpassed the level of pure technology. In other words, every plug-in, instrument or computer is just a tool. If you want to create a piece of music that is going to last you have to find a way to define your very own unique musical language. It’s like discovering your musical fingerprint. Formats have been the result of such individual efforts. Because of the pianoforte we have the concerto. Because of Elvis Presley we have the format of the three-minute single and the jukebox. And because Native Instruments invented the plug-in Massive we have dubstep as a preset. But we should not be trapped by this insight.

By the way, one of the tracks on my new album mirrors exactly that. Together with Nicolas Godin and Jean-Benoît Dunckel of Air, I recorded the track “Close Your Eyes”. We had the idea to utilize all the different technologies that were used over the course of the decades and to feature them all in one track. The track starts with sounds from oscillators of the Pierre Schaeffer era and the first loop we made was magnetic tape that we’d cut with scissors. From there we went to the first drum machine and the first modular synthesizers to the first sampler, which was the Fairlight. Then came digital hardware and finally some Native Instruments plug-ins. And the last sound on the track was made with an iPad.

How did you approach all of these world-famous musicians, gathering them like a tribe around you?

First of all, when you love someone’s music, you have a fantasy about the person behind it. You project a lot of ideas on this person. This is a prime example of how our imagination works. You may have noticed that my album is the exact opposite of all these albums that have features of famous artists on them. These commercial albums are all made according to the same generic formula: You send files around the world and get back vocal tracks or a guitar riff from people you’ll never meet that you then copy and paste into your music. In my eyes, this is a worn-out marketing concept.

So, what exactly makes Electronica so different then?

I wanted to physically meet each and every collaborator face-to-face. I traveled the world for this. And not only that: I approached everyone personally, avoiding agents and managers. I wanted this to be a collaborative project between artists from A to Z. Paying respect to each artist involved was a huge issue. And this included recording a demo-—as opposed to a finished track—for every single artist I approached. These demos basically mirrored the musical phantasies I had towards each musician and left enough space to add their own ideas and to express themselves.

In 1975, Bob Dylan gathered a stellar cast of artists including Joan Baez, Roger McGuinn, Harry Dean Stanton, Allen Ginsberg, Kinky Friedman and others to embark on a tour that would carry the name “The Rolling Thunder Revue”. Were you perhaps doing something similar?

I know what you’re getting at. Of course I would never dare to compare myself to Dylan. But I am aware that the young generation considers me one of the godfathers of electronic music. And apart from that I am the boss of my own project, yet at the same time I am fully aware that I can only learn from all the young musicians that I’ve actually met all over the world. There always has to be a director if you want the result to be cohesive. Believe me, if you show a lack of leadership you can’t fit so many egos—Massive Attack, Tangerine Dream, John Carpenter—on one record.

This article originally appeared in the Fall 2015 issue of Electronic Beats Magazine. Click here to read more from past issues.