As a DJ, I tour around the world and see a lot of clubs, and there came a point when I wanted to have one of my own. I had my own vision of a space to celebrate music and dancing. A professor from the school of arts in Offenbach [Hochschule für Gestaltung], Heiner Blum, told me that he had this special place for me. It was a little outside of Frankfurt in Offenbach—a little off-grid, I thought at that time. But my partners Klaus Unkelbach, Sebastian Kahrs and I saw the space with its wonderful terrace and beautiful view of the river Main and thought it was perfect.

My vision was to make a club like an artspace: white walls, a black wooden dance floor enabling people to dance longer, fewer lights to keep the focus on the good sound system, and nothing else. From the beginning we wanted to have flexibility and modularity. Robert Johnson is a space where everything is movable, all of the equipment and all of the interior. We can make it feel bigger and we can make it feel a little smaller. For me, it was really important not to present the room like a discotheque or a typical club. It’s like you’re coming into a friend’s living room; you just want to spend time there. Therefore it was also necessary to not have any advertisements or branding inside the club. For the bar this meant not having bottles of alcohol in sight. In terms of the booth, the DJs are on the same level as the dance floor, so you can reach out and touch them. They’re very closely connected to the dancers. I think this is why a lot of DJs love to play here—the intimate connection to the dance floor and its dancers. 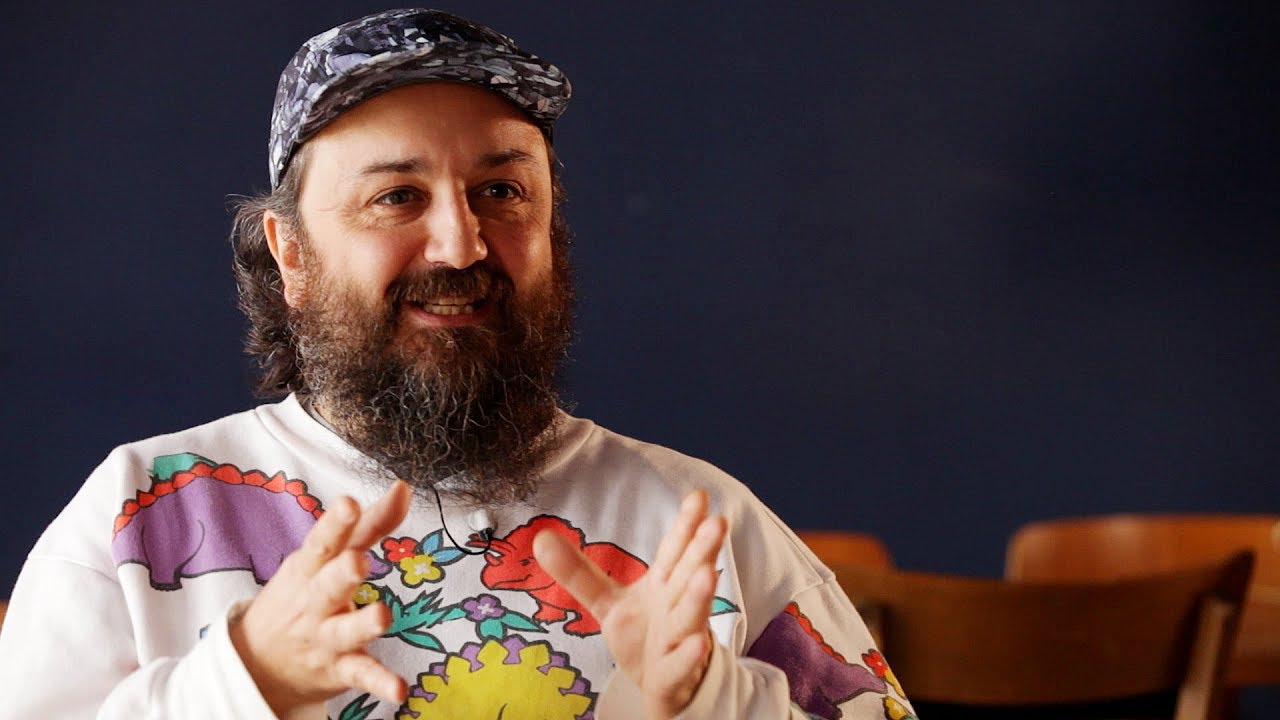 Here, the philosophy isn’t just to make money off selling drinks and the entrance fee. Take the bouncers at the door: in the beginning they were all women, to show people a different way of how to think about entering a club. We always wanted to keep staff meetings as democratic as possible, and everyone in the team should have their say. A little bit utopian, but that was always super important to us. This was also the main angle of our exhibition Give Love Back that ran from September 2014 to January 2015 at Frankfurt’s Museum Angewandte Kunst. All contributions to the exhibit came from friends, mostly Frankfurt natives. Some of them are established artists, like Michael Riedel, who managed to show the evolution of Robert Johnson over 15 years. Also, the photographer Daniel Herrmann (who made a mix for EB Radio last year) came to the club every Friday and Saturday for three years taking pictures. The results were similar to Andy Warhol’s Studio 54 portraits, which is why we took the best of them and made them into wallpaper for the club—so everyone could find themselves on the walls.

In the beginning, club nights were not always super crowded, as word of Robert Johnson didn’t spread immediately. Also, we played deep house and this was not at all common for Frankfurt. You know Snap!’s “Rhythm is a Dancer”? That’s the original Frankfurt sound: Eurodance. Actually, Culture Beat and Snap! are both from Frankfurt. All this big-room handbag-house or hard techno—these were always considered the Frankfurt sound. The harder EBM-inspired sounds of older clubs like Dorian Gray, and then later trance, hard techno and “schranz” at Omen, Sven Väth’s Cocoon, and Monza are obviously associated with Frankfurt as well. That’s why Robert Johnson stuck out and made its reputation for doing something very different. For example, Dixon was one of the first residents, as well as Gerd Janson, Ricardo [Villalobos], Luciano—all of them close friends. Naturally, we’ve done lots of records through Playhouse [Ata’s label with Roman Flügel, Jörg Elling Wuttke and Heiko MSO], Klang Elektronik and Ongaku Musik. The sound we were pushing—deep, minimal and often psychedelic—had its origins in earlier parties we threw. In the mid-nineties Heiko [MSO] and I ran a night called Wild Pitch Club, which was really intense. This eventually led to a strong friendship and putting out Ricardo’s first LP on Playhouse. You could say Robert Johnson bridged US deep house and German house sensibilities, opening the door for minimal house. What many people today may associate with a Berlin sound was an extension of what was pioneered in Frankfurt. Robert Johnson made that happen.

This article originally appeared in the Spring 2015 issue of Electronic Beats Magazine. Photo by Lina Ditlmann