A few months ago, Native Instruments rolled out a new edition of its Reaktor program, Reaktor 6, which models a software music production studio after a modular synth rack with over 30 oscillators, filters, sequencers and effects.

It unites the digital and analog worlds by bringing modular methods to computer production platforms, and that’s a pretty precocious move considering the reinvigorated interest in modulars among contemporary electronic musicians, including Jan St Werner and Tim Exile. As a pioneering instrument builder for Reaktor, Exile has contributed directly to its development with innovative programs such as the recently revealed Flesh and has also released his own music on established electronic labels Warp and Planet Mu. Jan St. Werner, who has previously talked tech on Slices, has pushed musical boundaries for decades as a member of the influential duo Mouse on Mars and guest director at Amsterdam’s Institute for Electronic Music (STEIM). Their respective music is inseparable from the innovation and playfulness that Reaktor encourages, and here they explore a deep appreciation of the elegance of systems that open up such possibilities. 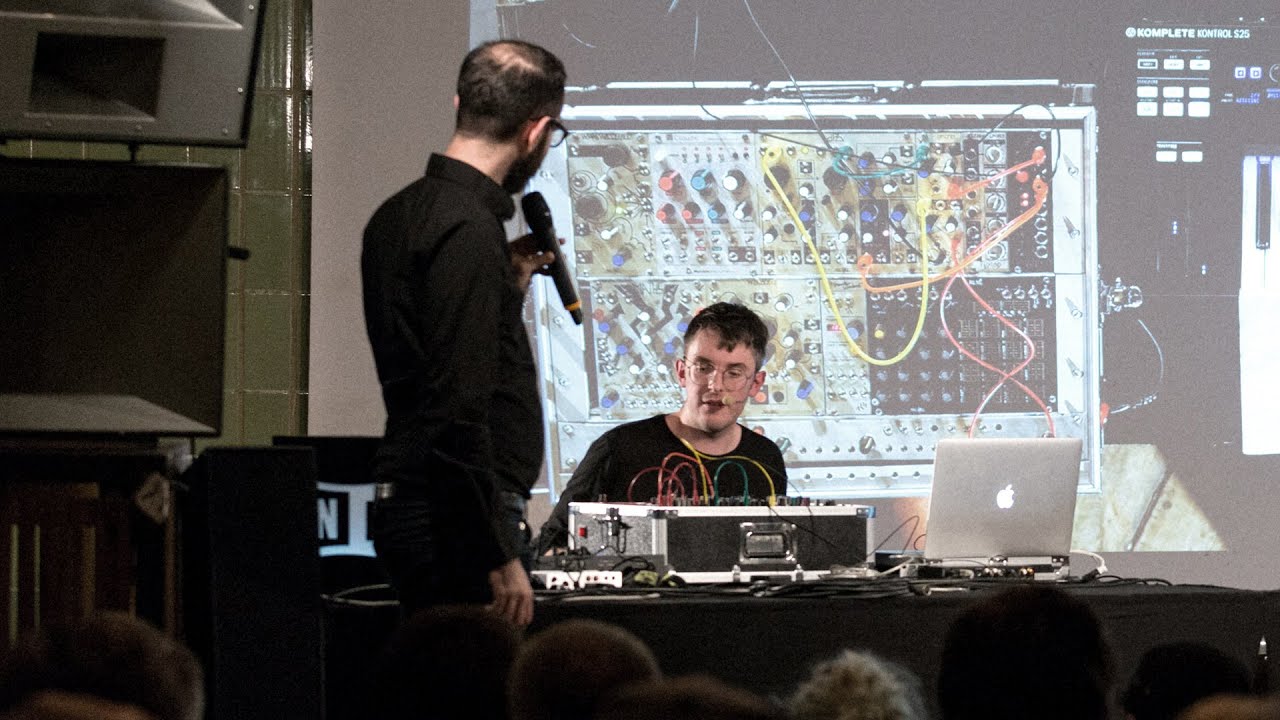 Tim Exile: I first started messing around with sound on a PC in ’94 or ’95 when I was around 14. There was a free CD on the cover of a magazine with this wave editor thing. It also had a super rudimentary software synthesizer with the precursors to the graphical interface we see in Reaktor and all other digital modulars. The sound quality was horrendous, but it planted the seeds of digital music in me. At the time I was into house and jungle, so I wanted to achieve fairly sequenced eight-bar music. I didn’t even consider trying to sound different until I was well into my 20s.

Jan St. Werner: I started playing with tape recorders to make soundtracks for games I played. I’d also record movie soundtracks, cut out the dialogue and extend the ambient part to make audio plays. Once I began sampling, my projects became more track-based, but I never did it seriously. Unlike you Tim, I was never interested in rigid music—I always wanted a story-based progression. I never had anything to compare it to until when, as a late teenager, people showed me music that really hit me: Holger Czukay and David Sylvian, concrète and phase-shifting music and old industrial. Often, these musicians didn’t really care about aesthetics, and whether it was electronic or tape or microphone experiments, the sound would never exactly explain itself. That fascinated me.

TE: What you say makes me realize how goal-oriented I am. I don’t do that much “messing around.” As soon as I got into Reaktor, before even knowing what it was or how to use it, I had quite a fixed idea about what I wanted to do. When I was younger, I would sit at the back of class tapping out jungle edits with my fingers, thinking, “You must be able to make something to load a drum break into and do the editing live with your fingers—that must be possible.” As soon as I learned how to use Reaktor, that was one of the first things I did.

JSW: I think there’s a widespread notion that one must prioritize “free experimentation” and “finding your voice” over making copies. I think it’s the other way around. Once you understand how a principle works—a kind of deconstruction of its codes—you start really understanding how these things work. I’ve always respected people who could find and point out microscopic differences in sound at the programming level. That said, I really love hacking without being so dogmatic about having to build everything from scratch. I don’t have to build stuff from scratch to know I have an original sound, but I have an immense respect for people who do build from scratch. When I was at STEIM, I was fascinated by people who would build their own synthesizers and self-program software. To understand the principle behind something and be able to reconstruct it just by listening is super appealing to me.

TE: Once you begin digging deep into what other people have done, you reach a certain point of proficiency that transcends conscious thought. What would have previously been a clunky imitation of a track or genre disappears into a much bigger, mixed-up store of experiences, which are expressed by how you interact with your tools.

JSW: That’s what I wanted to say. When you’re truly able to break into a system, I rate endurance and concentration very highly. My process, on the other hand, is a matter of getting around obstacles. If something is getting complicated, I just find another way. When Mouse on Mars jam, we still load everything into a sampler and play every little piece by hand, even though one could easily automate it. Even if I find a really nice sound, I try and take it apart and rebuild it, and even if it sounds worse than before, that’s just part of the fun and challenge of making music that way.

TE: When I get into a compositional frame of mind, it’s ultimately about meaning. It’s like writing a thesis; you have to make the words your own. In the ‘90s, it was easy to think that all preset sounds were pretty crap or mundane and that you’d have to design your own sounds. Now, it’s not that the sounds are bad, but the process has changed. In a more existential sense, we are trying to make sense of our own minds and world by taking the material and not just going “plonk”—sonic consumerism. People want to design their own sounds in the same way they want to build their own bikes or practice home cooking. 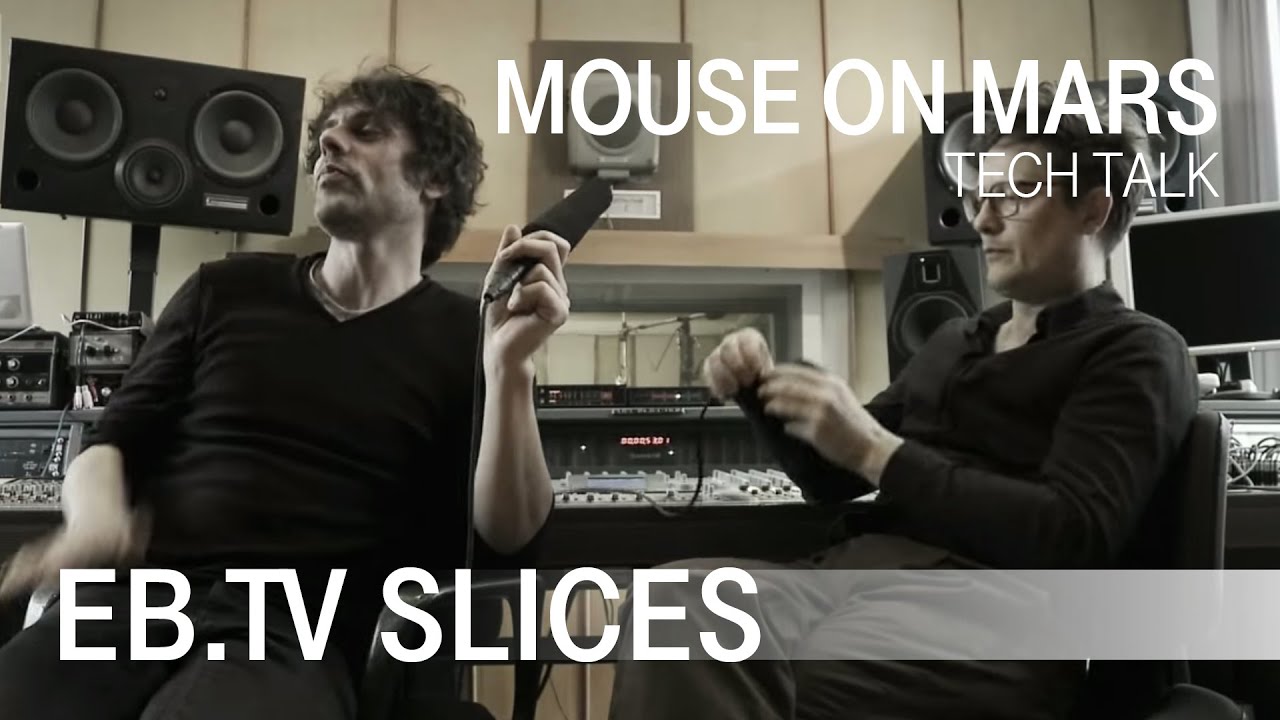 JSW: Music is a very weird art form because it vaporizes quickly. The moment you hear it, it’s basically gone. It’s gone before you hear it. But building it may have taken years. The effort you put into it and the speed by which it gets consumed is paradoxical, but that’s what makes it valuable to me: that you can spend so much time on the detail of a thing and there’s no pretension that anyone else has to suffer the weeks of effort that you have put in. It may hit some person at some point, or maybe never. Producing a great track in itself isn’t my motivation to make music. I want to spend as much time as I can with sound, but it has to be light, it has to be understandable and it can’t be elitist. If no one understands, then it doesn’t matter, because you had your time with the sounds.

TE: I have to confess that up until the last few years, I really just wanted to make great music. I’ve distanced myself from that attitude by taking an improvised approach. Putting myself on stage helps me achieve that flow and liberation you were speaking about by working with the material of sound. It’s been quite therapeutic.

JSW: What I’m learning more and more is that how I approach music is not necessarily how the music translates. I don’t mean the difference in each listener’s psyche and physiognomy, but rather philosophically: what music means, and what it is. I don’t think about innovation on a technical level so much; what is really necessary is to think about what music actually is and what it could be to us. And in a way, I’m sad about seeing the end of the era of recorded music that exists on an object you love as much as the music itself. But I’m also really happy that there are more and more records being realized that are basically systems or circuits; you switch them on and the music is being played in real time. Remix culture also means people are thinking about assemblages of music in a much stranger way.

TE: I wonder how producers who want to bare their soul feel about refactoring their music into something that’s a bit more like catering.

JSW: That’s an interesting point as well. With each piece of music, you tell a story—that’s at least part of the soul of musical production. People still refer to the old times of music writing, but some things can’t be taught. So what is the future of storytelling? You can’t go to the same vintage studio and use the same vintage machine. In that sense, I think Reaktor is actually an amazing communicator between the hardcore coding and programming approach and something very casual, immediate and preset-oriented.

TE: I’ve been using Reaktor for 15 years and matured as a programmer on it. I first learned to program in Reaktor, so I basically can’t program in any other language. I learned my technique in Reaktor, too, so I’m completely absorbed in the platform and I’m free to go wherever my imagination takes me. I didn’t plan for it to happen this way. I was always hell bent on being a musician, and was thus using Reaktor, but never thought I would make commercial products for it.

JSW: But it’s pretty amazing that that path is possible. What I find interesting is that we are at the end of the Moog era, in which synthetic sounds were thought of as an extension of the piano. We’re finally entering the Buchla era. Buchla was more invested in opening up a new field. Reaktor relates to that approach.

TE: Yes, it’s so well formed in that sense.

JSW: But that’s the core quality of a good idea: the modesty of its engineering. I always preferred the tools that you couldn’t immediately understand why it had been made in the first place. And once you break through, it has modesty and graciousness. It doesn’t want from you—it gives to you, and you have to understand what you want to do with it. The more I lose my intentions and lose my preconceptions, the more the thing unfolds. It’s really a dialogue with a world that was discovered by someone else. They opened the door, and you’re able to go in.