Max Dax met Jimmy Somerville in a nameless posh hotel along a nameless, not-so-posh street near Alexanderplatz in Berlin. Muzak wafted through the speakers in the hotel lobby, but the filter coffee was passable. First encounters with Jimmy reveal his surprisingly small stature and a lower voice than one might expect, if they’re familiar with his records. Of course, he doesn’t talk in the falsetto he became famous for in the early ’80s as a member of synthpop trio Bronski Beat. Rather, his voice is low-swung and self-aware, with a broad Glasgow accent. Somerville’s new disco album, Homage, is a return to form, which he describes as “a tribute to sexual freedom, hedonism, and self-empowerment.” Max Dax sat down with him to talk pop’s explosive second wave in London, passing on Trevor Horn, the advent of the AIDS epidemic, and surviving the ’80s. 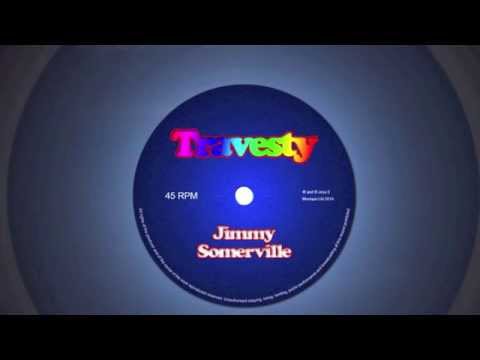 Max Dax: I met Holly Johnson the other day, and he told me that back in early 1980s, Paul Morley of ZTT had played with the idea to sign Bronski Beat instead of Frankie Goes to Hollywood. Do you think that would have made a big difference?

Jimmy Somerville: When we formed Bronski Beat, there were three labels that wanted to sign us, one of which was Zang Tuum Tumb Records. I really loved Trevor Horn’s productions at the time, and I could have imagined Bronski Beat in that surrounding. I mean, Trevor sent us stuff that hadn’t been released yet, including new tracks by Art of Noise, and I really was blown away by the high production value, which was unheard of at that time. But if we’d signed to ZTT, Trevor Horn would have had 100 percent control over the production, and that would have also meant that ZTT would have had total control of the image and everything else. That wasn’t what we were all about; we didn’t want to be controlled by anybody. We knew what we wanted to do and I’m kind of glad that we didn’t follow the trail of the money because they had some explicit ideas how to present us that I didn’t like to start with.

How do you think Morley would have marketed you?

It was just before the famous marketing campaign with the “RELAX” T-shirts that made Frankie famous. Morley’s idea was to have us wear and market T-shirts that basically said that we were gay, because they’d have words like “QUEER” or “POOF” printed on them. I have to admit that they were great designs, but I wasn’t really interested in some kind of a controversy or being reduced to the fact that I’m a gay male. I had to make the decision between remaining free or being produced by Trevor Horn, and I picked freedom. So basically, you wouldn’t run away from a small town to end up in chains in a big town?

Yes, exactly. And don’t forget the way “Smalltown Boy” sounded! It’s raw and very emotional. That would have all been completely flattened out by Trevor Horn.

The ’80s were the decade in which design, music, Bolshevik chic, and Neville Brody’s typography became a new hybrid. You were one of pop culture’s protagonists then.

In the early ’80s, pop music started to become this larger-than-life cultural phenomenon that basically impregnated the whole Western society.

It was when MTV started and music suddenly became visual. It was as if the videos had been the missing piece in the big puzzle.

I still like the video to “Smalltown Boy.” Just before it all started, there was this massive impact emerging from New Wave and electronic music, and it all went together with fashion that seemed to celebrate the new decade, a decade of individualism and experiment. You mentioned MTV, but don’t forget stylish magazines such as i-D, Dazed & Confused, and The Face that amplified the whole conglomerate. Within months London became the world capital of visual style. It was the city in which pop materialized.

And with pop came the explosion of music and of sexual politics.

London was the epicenter of sexual politics, fashion, and style. Everything was exploding at the same time. The idea of youth culture was redefined, just as the hippies had redefined it in the ’60s. In fact, the second wave of pop had many similarities to that movement, especially in the sense that sexual politics were again the driving force.

The small town you escaped from was Glasgow.

I had to! They would have beaten me to pieces. I was openly gay and skinheads who hated homosexuals ruled the streets. I left town in 1979 and headed to London. Everybody sensed that something very special was going to happen there.

I think that London was and is the capital of the world—much more so than New York.

New York has always done a great PR job on itself. America still is a very divided country on race. The police force and all of the institutions are geared towards oppressing black America, so it really does irritate me that the US is still considered the most democratic and the most liberal country in the world, because they’re not. If you haven’t seen it yet, you have to watch the incredible BBC documentary Requiem for Detroit by Julian Temple. I don’t remember seeing anything so moving.

Have you ever been to Detroit?

I’ve never been there, but after seeing this documentary part of me wants to go. It’s almost like the same uncomfortable feeling that I would have if I was going to Delhi in India. And I thought about how freaky it is that I would be just as disturbed by Detroit as I would be by Delhi. America does an incredible job of blinding the rest of the world about the actual reality.

Homage, your new album, is about disco, which is a true American art form.

It is! But when we talk of disco many people still think of office parties and polyester trousers and wigs and the Bee Gees doing “Stayin’ Alive.” But when I think of disco, I think of the ballroom scene and of one of the greatest liberation movements in the history of pop. The substance of disco is incredible! The “disco sucks” movement wasn’t just about people not liking disco music; it was about white conservative heterosexual America reacting out of fear of a movement from the underground which was suddenly becoming very visible and which consisted of people who were on the fringes of society, like gays, lesbians, and blacks. Disco was an unprecedented celebration of diversity, and white conservative America didn’t like it. The politics of disco are absolutely massive.

And you pay homage to that diversity.

Yes, and also to the sexual politics that came with it. My first real music-meets-life experience as a grown-up was at an underground club. We had to go into the basement to dance to the music, and in the process, I met other men who were also on the fringes of society. One of the first records that I bought was the Village People’s self-titled debut EP from 1977. The four tracks were titled “Village People,” “Fire Island,” “San Francisco,” and “In Hollywood (Everybody is a Star).” All four songs were about places: Fire Island was a gay weekend holiday playground, San Francisco and Hollywood are self-explanatory, and “village,” of course, refers to Greenwich Village in Manhattan. So that mini album focused on four places that were on the forefront of a sexual and political revolution. I mean, imagine living in Kansas in 1977 and not knowing where to go; the Village People had the answer. And not only that—they were saying, “We are people!”

Do you think that the world we lived in 40 years ago was a completely different one from today’s?

Within the last 40 years, obviously, a lot of things have changed to the better. But when I called my album Homage, I also realized that I belong to the first generation of musicians that can actually look back and really pay homage to pop music. The Beatles couldn’t. They could pay homage to the old blues musicians, but not to pop. As a gay man I was allowed to go back into the formative years of the genre and to pay tribute to sexual freedom, hedonism, and self-empowerment.

It turned out to be only a short summer of love, though.

Straight after that came the first wave of people to be diagnosed with AIDS. No one understood what it was, but it was killing people, and suddenly the decade of sexual liberation and gay pride became tainted by this flu and turned into the decade of death, discrimination, hysteria, and fear. You have to take this into consideration when you talk about disco. It’s heavy stuff. In that sense, my new album is a celebration of something beautiful in the face of adversity. This is a way for me to express my optimism and my ability to rise above that fear. Homage really is the first album I feel completely in synch with. I just love the songs and the production.

How do The Communards fit into the equation? You founded that group with Richard Coles in 1985, and you dedicated its second album, Red, to Mark Ashton, who died of AIDS in 1987.

I’ve always suffered from self-obsession and a lack of confidence, so I remember The Communards’ endeavor as a never-ending series of discussions about how we could or should have made the music differently. I just remember the time as uncreative. But I still love the artwork of the first record. It was an act of reclaiming an ideology that had been hijacked by communism. The original communards in Paris 1871 were not totalitarian—they had great ideas. I can’t say our two albums were unsuccessful, because I think we were in the top ten all over Europe. Did you know that The Communards were an all-female band when we played live? That was quite a radical statement at that time—especially if you compare my career to all the other singers who had become mainstream by the end of the ’80s, trying to cash in as much money as possible before it was too late. The Communards were a radical little band.

Do you see yourself as a survivor of the ’80s?

That’s truly an interesting question. It wasn’t until recently that I started doing a lot of work on myself and who I am and on certain aspects of my past, and I realized that, yes, I am a survivor in more than one sense. At a certain point in my life I even had incredible survivor’s guilt. And this is an aspect that still has to be spoken about. I think whenever and wherever something traumatic happens in this world, such as a war or an epidemic, we don’t discuss survivors’ guilt. This is especially true of the gay community. I mean, I was hedonistic, I was sexually liberated, and I wasn’t infected. But I was affected emotionally and psychologically because I asked myself, “Why everybody else? Why not me?” As time has elapsed, I now can tell that maybe I survived because this obliges me to reflect the times. Only a survivor can do that. I can now tell people about the second wave of sexual liberation and the terrible kiss of death that followed it. And I can tell people about the music that was on all the time: disco music. And to come full circle, this is exactly why I recorded my new album and why I called it Homage. I had to do it. I owe the world.