Since skyrocketing to fame in the ’90s with the revered album dubnobasswithmyheadman, the seminal UK act known as Underworld has managed to maintain its prominence without a hint of compromise. Today frontman Karl Hyde is joining Electronic Beats Radio to talk about the duo’s first album in six years, Barbara Barbara, we face a shining future, and the creative process that Underworld has developed over the course of several decades. Listen to several tracks from the new record and read his stream-of-consciousness responses to a series of photographs we presented to him in an Picture Stories interview below. 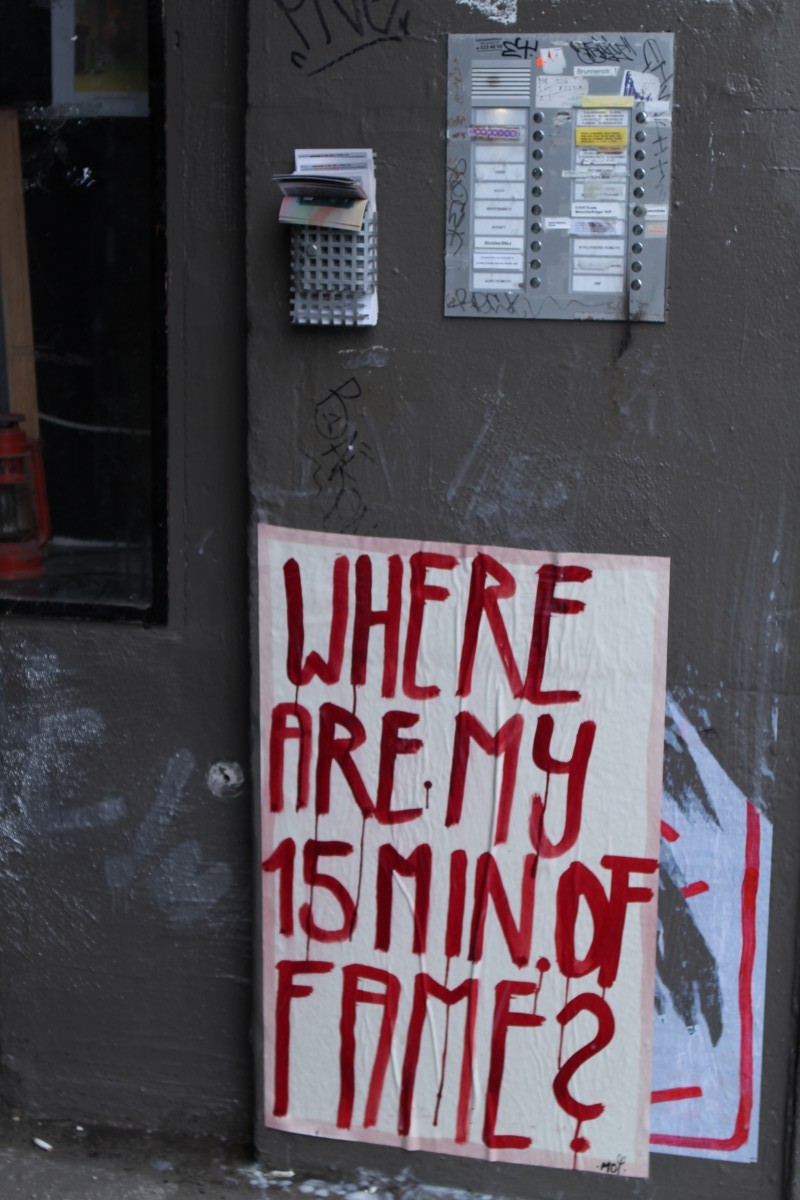 “First of all, I’m hit by the machine grey. It reminds me of steelworks and of Tokyo and Japan—there’s a lot of gray out there. And also the ripped nature of the paper down at the righthand side; I love the rhythm of that. It makes me laugh, this kind of destruction. And I like the fact that the paint is dripping and that it’s very dynamic. It’s not about precision; it’s about immediacy. I like this thing that looks like a clocking-on machine at a factory. And all these scuzzy marks—people have left these marks behind for me to find, which is what I love doing. This light reminds me of a miner’s light. My grandfather was a miner, and he lived underground and worked with explosives for most of his life. And then there’s this crap at the bottom, and that I’m really interested in, because that is what draws me to cities: the beautiful crap.”

“This picture reminds me of the night that Karl Bartos took me to Kling Klang to see the Kraftwerk studio. I like the rhythm of the wires that are connecting to each other, and the rhythm of the dots. Everything is about rhythm. It reminds me of Piet Mondrian’s [Broadway] Boogie Woogie and traffic moving between the buildings. These dots and these ants and these wires and this alchemy of the machine—it’s talking to itself and it’s in constant rhythm and it doesn’t really care whether you listen to it or not. And then you’ve got these three dials that are like eyes that are looking down on this other eye that’s at the bottom, which is looking down on something else. And then you’ve got this seat, which is inviting you to sit. It looks medical and clinical and it kind of creeps me out in a really cool way.” 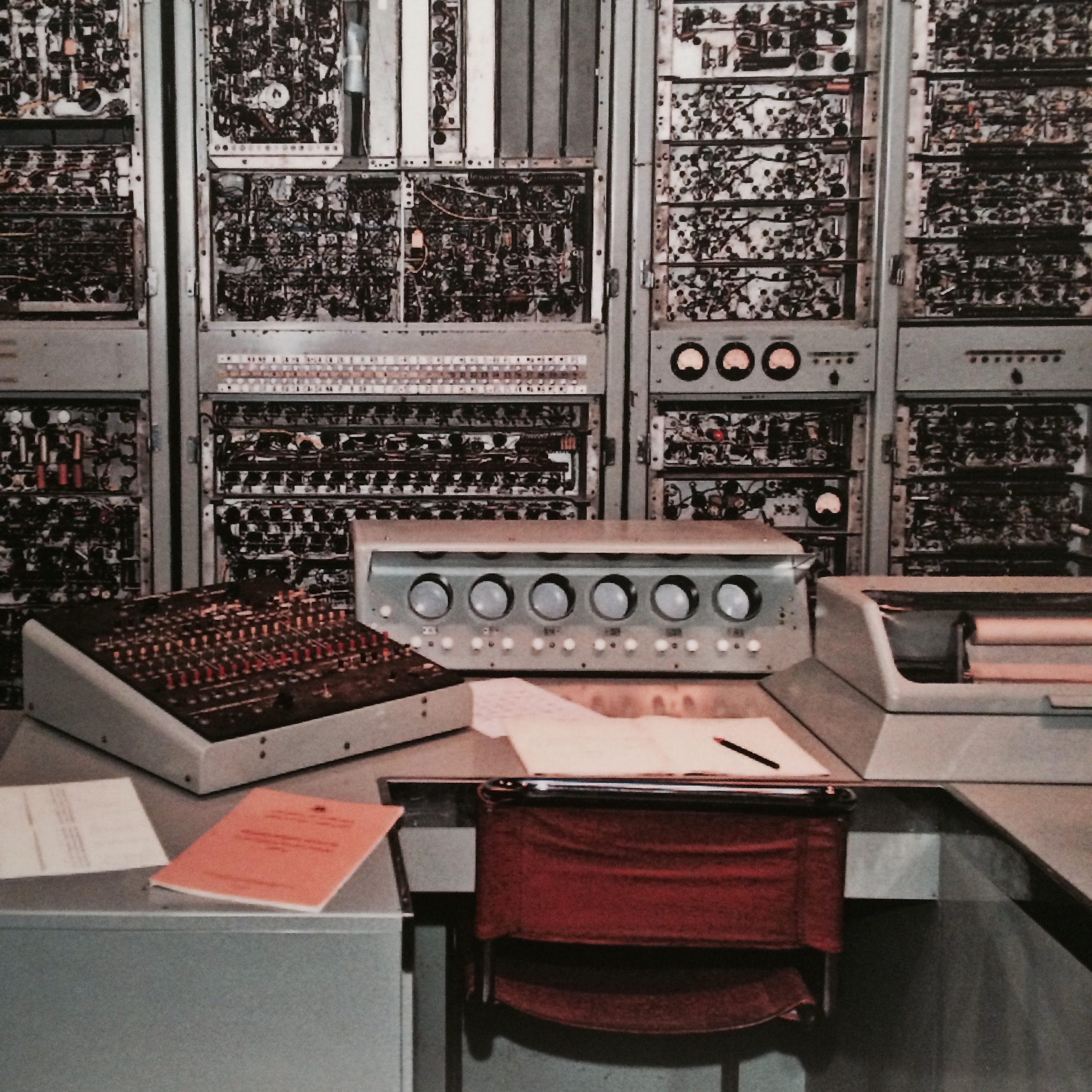 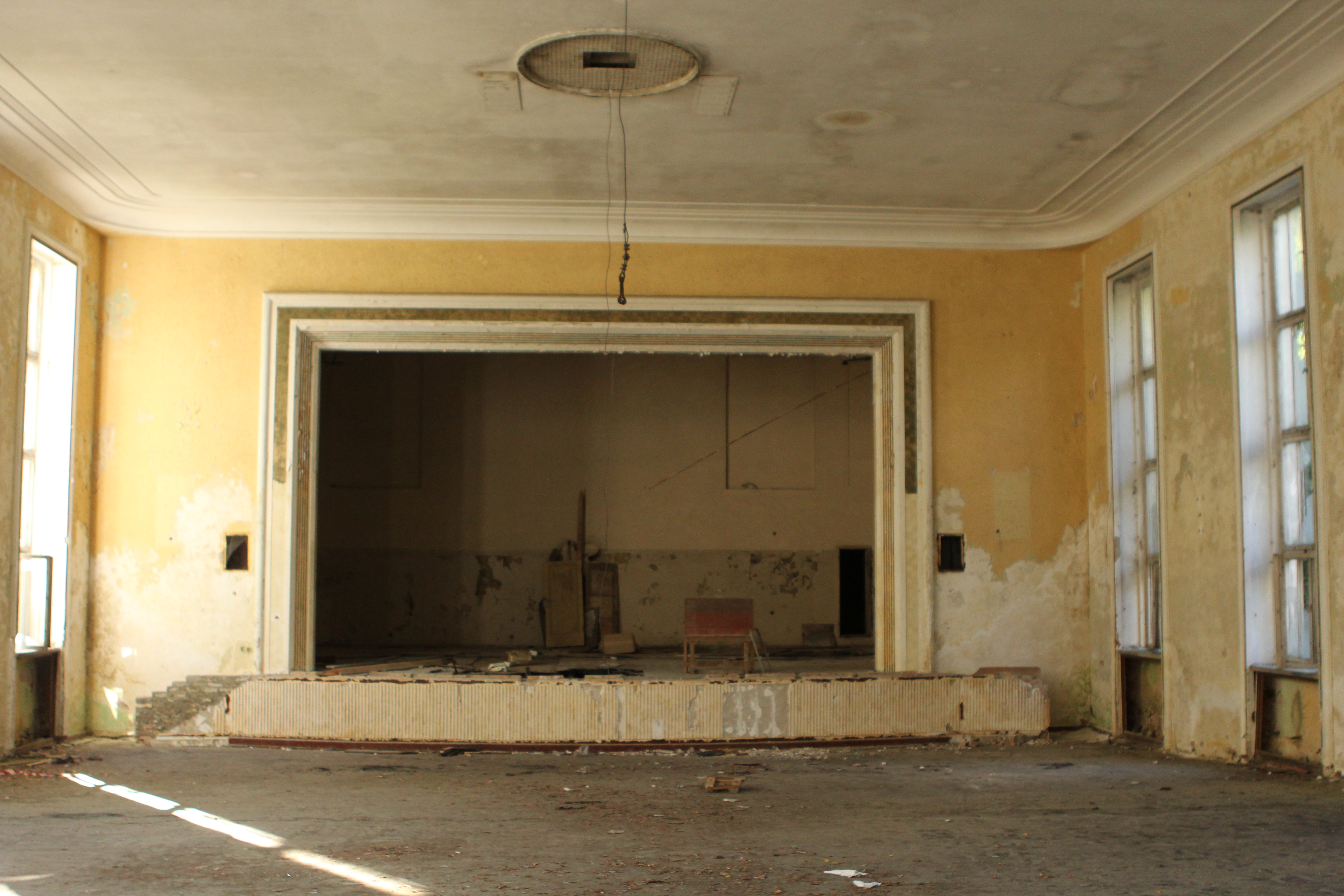 “I can smell this building. You’ve got sunlight coming through, but there’s coldness in the damp and there’s rot and decay under the stage. There used to be light and cheer and happiness where people would come to escape something, transcend something. But now no longer. There’s a chair there. Who was the last person to sit on the chair and why is it sat there and what was that chair like when it was new? These things we see around—they were new at some point, and someone was proud of them. I want to plug them into some kind of speaker that would tell me the story of what went on, and where these things came from. What is this metal that’s hanging down here? What’s going on up there, through that circle and that square?

I can smell the mildew and the dust, and it reminds me of the cleaners where my mum used to work. It was in an old building in a town where they used to make carpets, and it used to creep me out because I’d have to go to the toilet out the back and it was full of spiders and smelled of disinfectant. You couldn’t go in the attic much because if you did, you’d fall through the ceiling. It was always, “Don’t go up there, Karl.” But I did go up there sometimes, and you’d hear the sound of your feet on the bare wooden boards. It wasn’t meant for bare wooden boards; it was meant for something gentler and more gentile, in kinder times.” 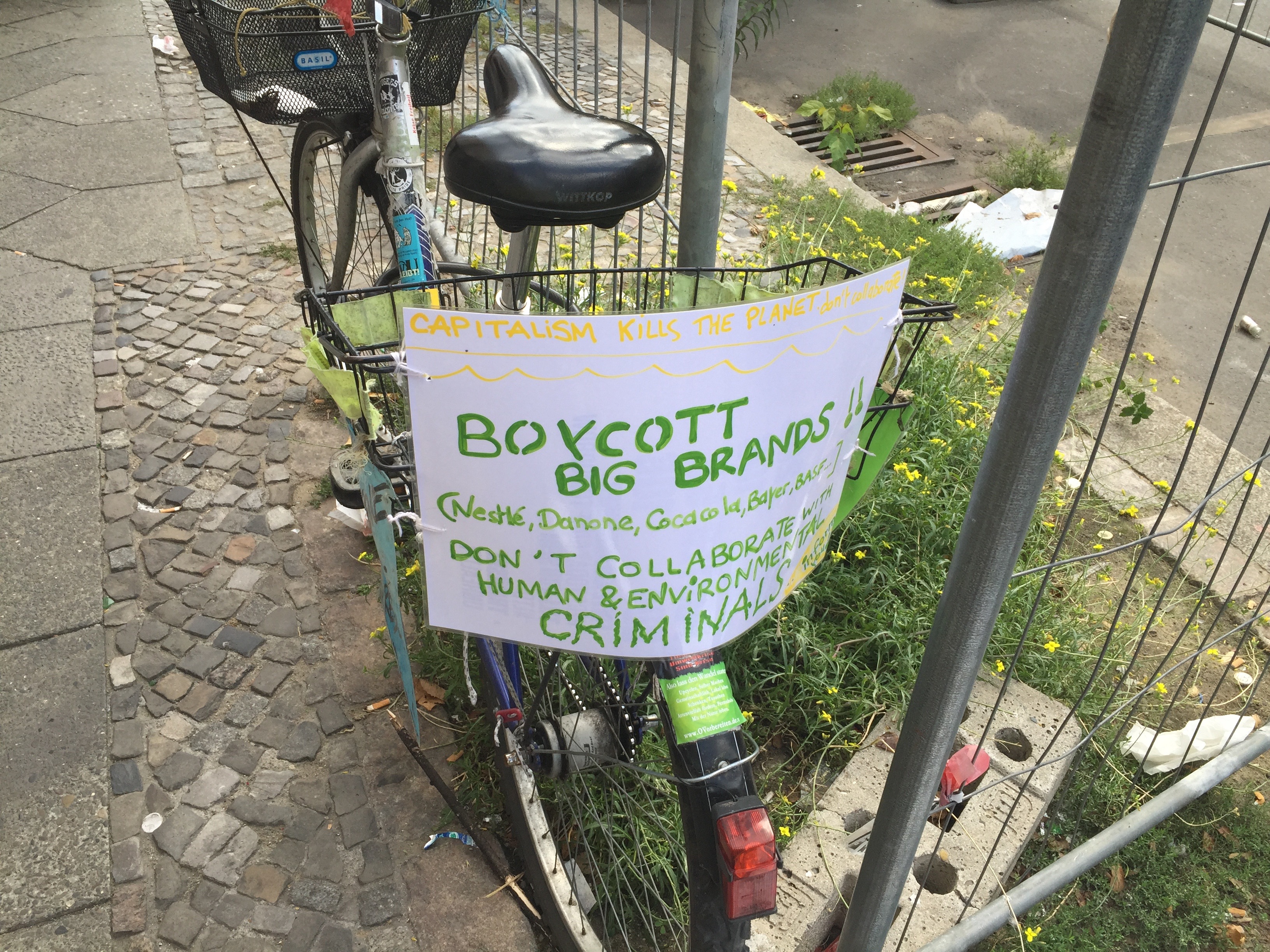 “What I like about this is the fact that it really is a mundane scene. I love these metal railings. Already I can hear the sound of them—I know the sound of these things, the pipes and the rattle of the wire netting. The concrete’s got a fantastic sound, very leaden. Then you run your fingers through these yellow flowers and they remind me of chamomile. In the background, there’s this drain. Metal drain covers have always got some sort of embossed logo on them, some legend of the steelworks where they were made—an industry, a town which has died out. Quite often in Europe now, those steelworks aren’t there anymore. Also, you gotta watch out you don’t drop your cell phone down them, although maybe if you did drop your cellphone down we would all be talking to each other a bit more.

And then there’s the blacktop, and that’s James Taylor in two-lane blacktop. That’s American graffiti. As a tiny kid I used to know the rhythm of the frequency of passing tires. The blacktop goes all the way around the world, it’s like a piece of recording tape. It carries with it the history of all the traffic that ever went on it. I like the white line across it. And now, we’ve got a bicycle. I don’t know what to say about the bicycle but that seat looks really shiny, like it’s been polished by all the asses in all the world. It looks quite soft as well. And it’s covered in stickers and that reminds me of Berlin. I love the fact that Berlin is covered in stickers.”

“What I like about this is the packing tape. The packing tape is really really beautiful. I can smell that packing tape. It’s the kind of stuff that the glue comes off. I love industrial materials as art materials. And then you’ve got the paper that it’s stuck onto, and it’s coming off slightly. The thickness has been folded. There’s something else going on behind there. It’s a bigger piece of paper than we can see. It’s got a secret. And notice the way things have been ripped off. It’s been made by an outsider, not someone who wants to make something neat and tidy, and this is something I can learn from. And then you’ve got this print here, which is kind of like Times. I like the fact that it has a serif, as it looks like it’s meant to be traditional. The message is less relevant than the blackness of the ink, and I can smell printing machines and old printing presses. I’m thinking of hot metal and I’m thinking of ink on your clothes and the smell of them on your fingers and you can’t get it off. And I’m thinking about the ink pen, and how when I was probably about 12 years old in the art department, it got stuck in my finger and left an ink mark there. To this day, I think it’s going to come out the other side because the mark’s disappeared now.” 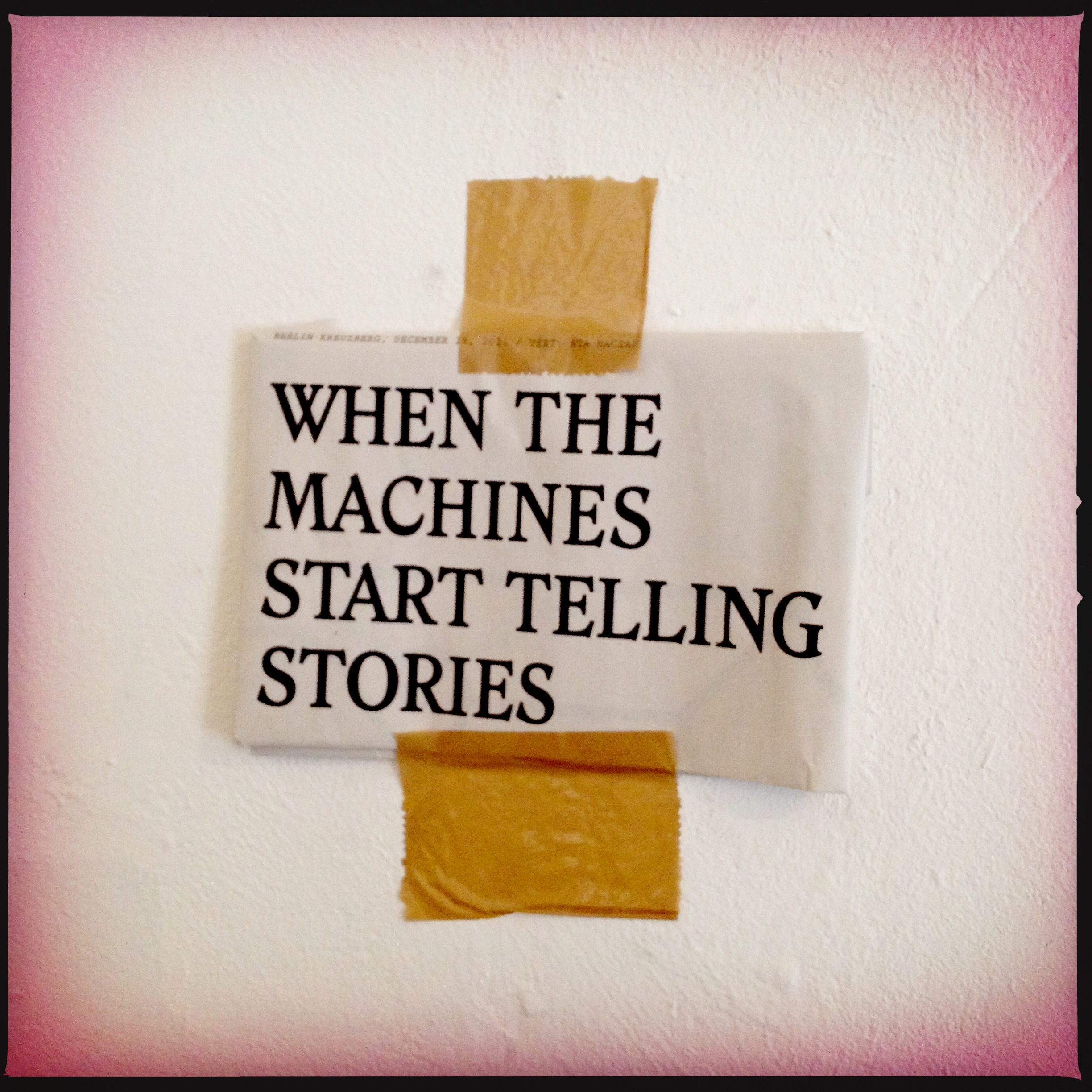 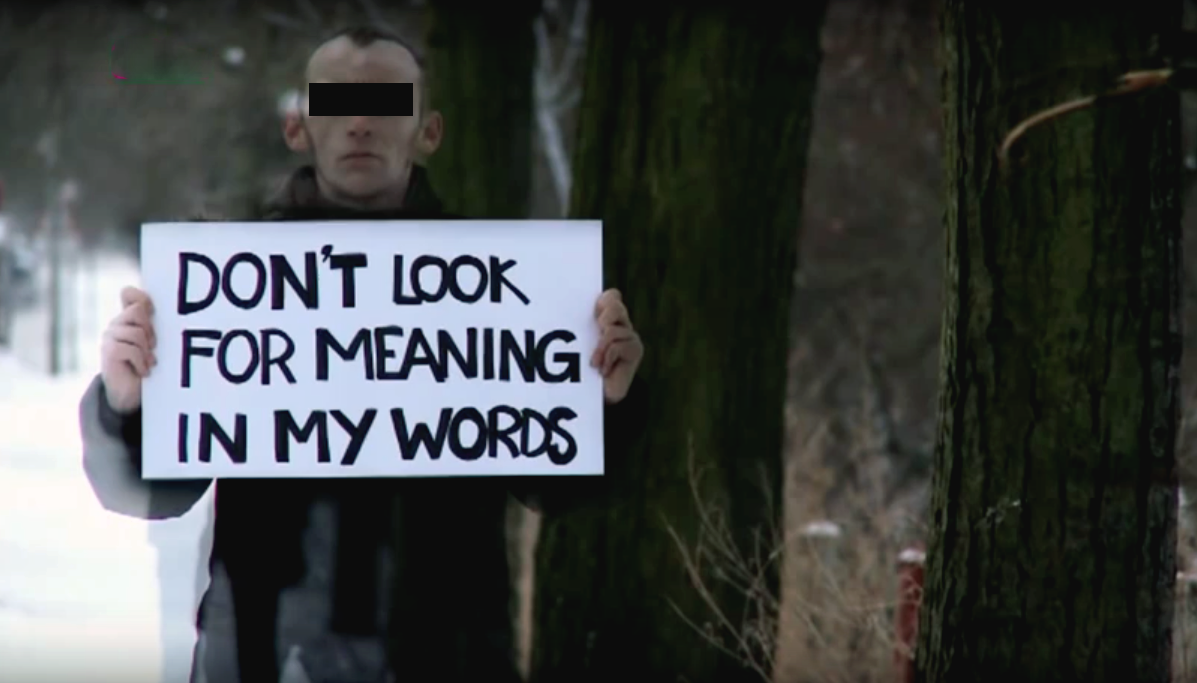 “Now this is kind of weird because the guy here looks like my friend Peru, who actually looks nothing like this, but it just suddenly reminded me of my friend Peru. And I’m looking and wondering why his eyes have been blanked out. Maybe because we don’t want to know who he is, or if they’ve been blanked out because he’s trying to be arty, and in fact we do know who he is but he’s trying to make some kind of statement. The black thing across his eyes is in the real world and the rest of it is in another world. And I like the fact that it’s just greys and greens. This is a really lo-fi photograph, maybe taken on a cell phone. I like that; I like low-definition photography. If I like high-definition photography it, has to be on 35mm. But lo-fi photography, like pinhole cameras and cellphone cameras, they’re really beautiful. And now I’m looking at the black thing and I’m thinking that black thing isn’t a black thing, it’s a hole—a hole into the guy’s head. A universe that’s inside his head, and he’s saying, ‘I’m a post box. Post your letter into a universe that’s inside my head.’”