Describing a staple European electronic music festival of 2017 would probably involve at least one of the following: tents; long queues; fancy cocktails and gourmet food; branded stages; perhaps even last-minute cancellations or police raids. At any rate, these events get the most attention in the international music press.

But there are other events. Usually they’re promoted less blatantly and have more subtle sponsorship, if any at all. And that’s not because the organizers of such festivals fail to lure corporate suitors with photos of young people dancing their minds off to the sound of a cocktail shaker. Neither is it because the organizers don’t know how to execute a marketing campaign or book a class-A DJ on his or her way back from Ibiza. In Lithuania at least, it’s usually because experienced festival promoters know too well and have done or witnessed it all. That’s the case with DT Camp, a boutique festival in the Lithuanian woods that showcases a diverse roster of artists both international and local, legendary and up-and-coming. They want to go back to where it all started 20 years ago or more.

As we noted in our review of this year’s edition of another Lithuanian forest weekender, Sūpynės, most of the country’s up-and-coming boutique festivals are based on the fertile soil of the local scene. But Digital Tsunami, the crew behind DT Camp and its eponymous podcast series, has a different philosophy. For them, the most important thing is that they book only quality electronic music, regardless of its origin or age. Among them was Dutchman Eindkrak, who won the sympathies of 90 percent of the audience by reciting books during his live show and then demonstrated his acrobatic skills by walking on his hands. Also on the lineup: Clone Records’ finest, Gustav Goodstuff; German underground heroes DJ Normal 4 and Philip Berg; the Minsk-based electro engineer Elena Sizova, who’s in the process of expanding her horizons to the West; S13, the mastermind behind renowned Lithuanian music journal Secret Thirteen; and (of course) the country’s all-time DJ legend Manfredas, who we recently tapped for a feature on his famed Smala party series at Vilnius’ Opium Club.

The artists all presented very distinct versions of squeezing the hell out of the sound system in nature. Attendees either camped or stayed in red, green and blue wooden shacks that were built by a large state-owned industrial company back in the foggy Soviet times. Some such enterprises managed to invest a portion of their profits in private campsites. Judging from the rare paved road leading to the grounds—most in the remote countryside are gravel—whichever company was responsible for this one must have done pretty well.

The 400-plus people who attend DT Camp were as international and diverse as those on the lineup. “I have been following the Digital Tsunami podcasts since the early episodes, and I really like their selection,” a German guy told me on Friday. “So after hearing about the team’s event, my friends and I decided to go.” He had brought a total of seven friends from Hamburg and Berlin with him, and on Monday morning I bumped into the crew again, as they had decided to stay at the wooden shacks on site for two extra days.

So, too, did a San Franciscan electronic music aficionado who arrived in Lithuania on Wednesday and was one of the first people to buy a ticket to the festival when they went on sale. The organizers told me after the festival that more than 30 percent of attendees (including the artists) travelled from abroad.

It’s hard to tell, really, who the “real headliners” were and who actually facilitated the festival’s peak moments. Was it the very first set, at 10 PM sharp on Friday night, when Lithuanian ‘90s rave diva Sati performed her biggest hit, “Pabudimas”, while wearing her retro platform shoes? Or was it around 5 AM on Sunday morning, when Identified Patient started the final hour of his set, an insanely powerful mix of cult classics by the likes of Anne Clark brutally blended with unreleased protein cocktails? Combine that with his noticeably athletic DJ stance—he’s a squash player—and you get one of the most inspiring young acts out there.

OKO DJ, who runs the LYL radio office in Paris and streamed some of Friday’s shows online, was responsible for the last musical statement of Camp’s main night. After arriving on site on Thursday, she took the time to acquaint herself with the surrounding nature and festival crowd. She took 20 seconds of silence to cleanse the palate of Identified Patient’s Dutch thunderstorm and the heavy weight of the preceding live set from DJ Nephil. After that, she started off with wailing and chanting that soon dragged everyone into a shamanic ritual spiced with slow jungle breaks and echoes. A morning rain shower encouraged the remaining audience to rush onto the stage, thus adding a ridiculous amount of unity to the atmosphere.

The rain on Saturday evening forced the organizers to re-schedule a number of performances. Luckily, because the artists also planned to stay at the Camp as long as possible, they didn’t have to cancel anything.

So a few hours after OKO DJ’s set, Muk, an eclectic Lithuanian selector and host of the Hidden Reverse show on Berlin radio station Cashmere, eased everyone into the last day of the festival with delicate picks suited for drained nervous systems.

The Brazilian Berliner Innsyter took it from there and quickly reminded everyone of how special Herbie Hancock and Conrad Schnitzler are. Most attendees stayed at DT Camp even after Digital Tsunami co-organizer NKS played the last track of an ecstatic back-to-back session with his cohorts, Ernestas Sadau and Roman Sputnik. 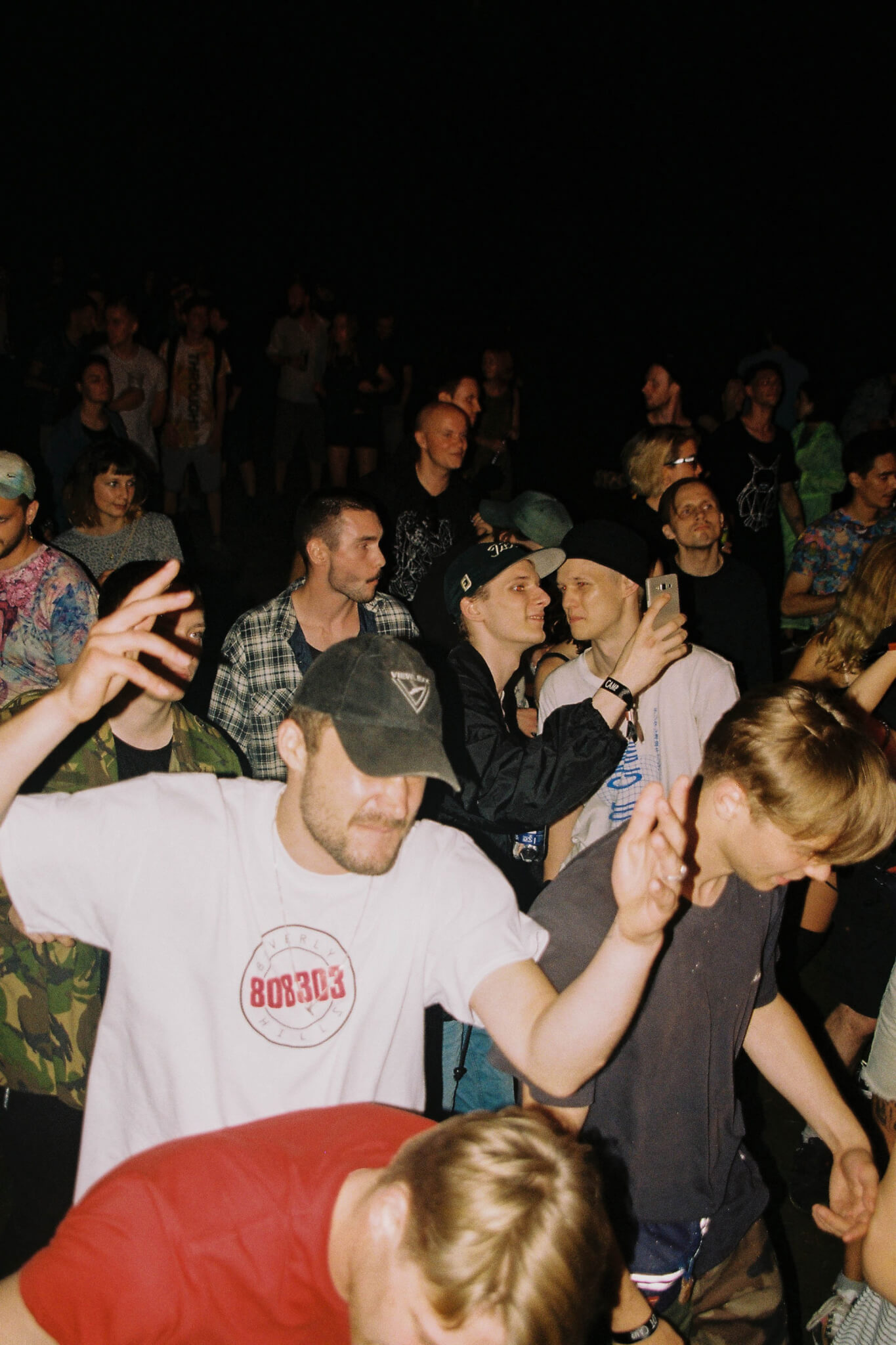 DT Camp was especially refreshing this year, as it’s become apparent that increasing regulations have transformed music festivals from cultural events for music lovers embedded in nature to grown-up amusement parks littered with fenced-off no-go zones. As DT Camp proved, the magic comes back when you strip the concept back down to a gathering for likeminded individuals. The organizers only hired a few security people who seemed to enjoy the occasional chat with festivalgoers. Not a single meter of metal fence was visible, thanks to the fact that the campsite is not only hidden deep in the woods and quite difficult to locate (hence the lack of disturbance by law enforcement), but also has a single access point.

It was a combination of factors that made DT Camp 2017 work. It happened to take place on the hottest days of Lithuania’s 2017 summer season so far, which were mercifully tempered by a few cooling and short thunderstorms. The setting was gorgeous, with a wallpaper-worthy, emerald-green lake surrounded by lush elms and those colorful shacks. The consistent yet varied lineup was unified by DT Camp’s single stage—oh how pleasing it is not to have to look at the program booklet every five minutes and run around the stages trying not to miss your favorite acts! The general mutual trust among attendees led to utopian anarchy, a system that really worked this time. Many missing phones were found and returned, cigarette butts became extinct, no car carried fewer than three people, extra beers were shared with strangers and lighters popped up before you had even thought of asking for one.

One key factor that contributed to the success of DT Camp 2017 was the simple fact that all the artists spent quality time becoming embedded in the festival rather than just doing their job on stage and leaving. DT Camp became their playground, trampoline and tabula rasa for future gigs, collaborations and travels. As artist calendars are oversaturated with gigs in summertime, it’s pretty rare for artists to be able to enjoy festivals from beginning to the end; it’s usually the same old routine of airport-hotel-gig-drinks-hotel-airport. And you can actually feel it listening to the performances of jet setters; they’re usually great, yet sound detached from the events themselves. Not this time. Not in this rave camp. And yes, it’s already confirmed for next year. Same place, same weekend. 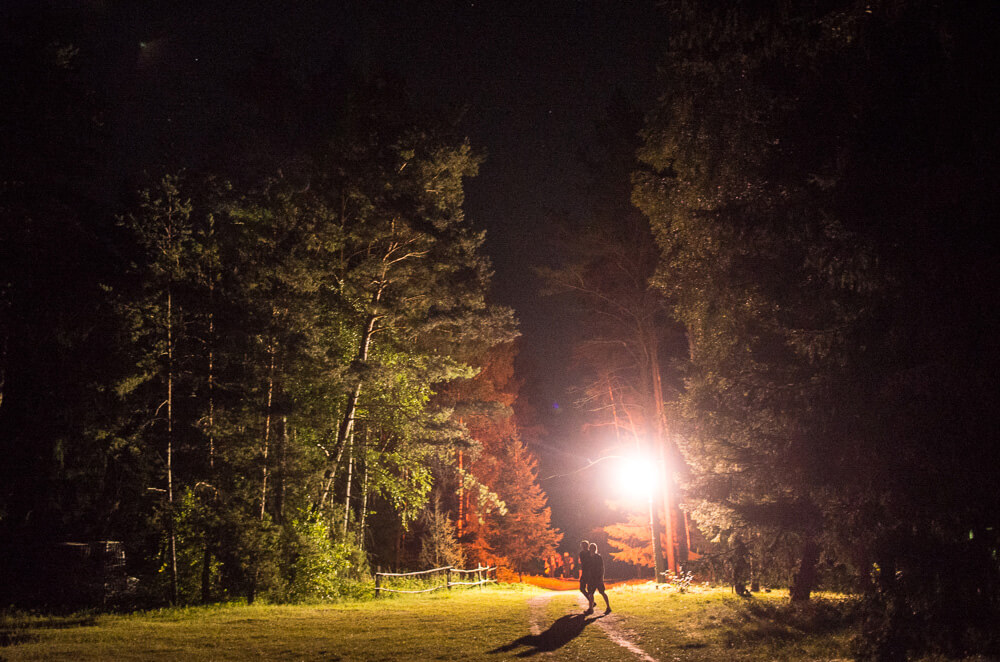