I met Dimitri Hegemann in Berlin. We hit it off right away. He has a great sense of humor, which was the main reason I messed around with Tresor later. The first time I visited Berlin must’ve been 1991 or 1992. I came to Germany with Mike “The Hitman” Wilson to play six gigs. Berlin was wild back then, and Tresor was already a techno institution. I’m a house producer and DJ, so hearing all this hard music played at what felt like 150 BPM was a bit strange at first. But Mike and I made it work.

I met a lot of people back then, most notably Dr. Motte. He started Love Parade, which was still in its infancy in 1990. He said the idea behind the festival was to spread love out into the streets, and that he was inspired by a track of mine called “Open Our Eyes”. He claimed that it had opened his eyes, and that he now only felt love. Dr. Motte is a real character. He also told me about his label, Space Teddy, and how Space Teddy was sending him messages. He was definitely out there. I never knew if he was serious about these things or not. We had a lot of fun on that tour. I stayed in Berlin for two months. 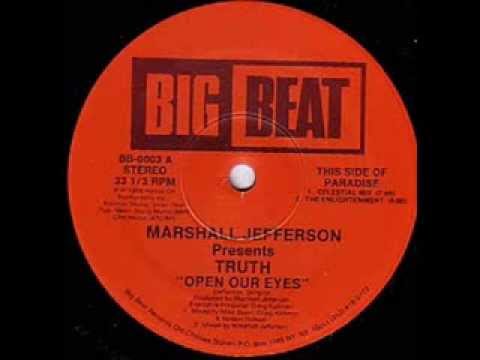 Next to the Tresor Records office, there were a couple of rooms for artists who played at the club. They were very small, though—the size of a bathroom. Only a bed could fit in one. They called it Hotel Sandman because the only thing you could do there was sleep. I stayed there for that whole trip, and nobody had done that before. I bought a bicycle to cruise around the city and a bunch of books because I was reading a lot back then. I also bought a stereo and a TV, and when I left they called the room The Marshall Jefferson Suite. During that trip, Dimitri and I had the idea to work together. He and his daughter had the plan to start a house sub-label, because Dimitri has a lot of love for Chicago house. The name of the label: KTM (Keep Things Movin’). And then in 1995, they invited me to come back to Berlin. Dimitri got some money to finance my trip and to begin producing an album. I think he got a publishing deal with BMG, and that’s why I recorded it at their studio in Frankfurt. You could say that Dimitri had the role of an executive producer.

I had no idea what I was going do before I went into the studio. I wrote and produced the songs on the spot. It took me about a week to finish an album’s worth of music. In Frankfurt, I stayed at Chris Liebing’s house, a good friend of mine. I actually did one of my biggest songs, “Mushrooms”, with Chris in Frankfurt. Chris and his studio partner [André Walter] were working on a song, and he asked me to go in the vocal booth and test the microphone. So I went in and told a story about tripping on mushrooms. When I came out they asked me if it was a true story—which it is—and told me that they wanted to keep it and maybe do something with it. Before I knew it, they released it on a record and it blew up.

My first record on KTM was an EP called Jump On It. It was the label’s first release. My album, Day Of The Onion, was the third release. The second release was by Vince Lawrence, whom I had introduced to Dimitri back in Chicago. I was living with him at the time. Vince had produced my first-ever record, which came out on my own label, Other Side Records, in 1984 or 1985 and was called Go Wild Rhythm Tracks by Virgo. To have Vince on the label was a big deal. He’s a big deal in Chicago’s house history. He eventually also released an album on KTM called Songs Without A Singer. 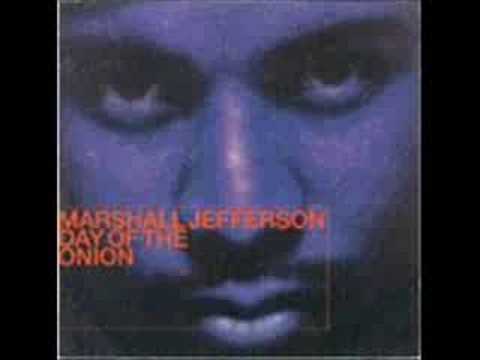 As I said before, Dimitri was one of the main reasons why I decided to work with Tresor and KTM. He had all these crazy projects and ideas. One was Space Beer, which was a great beer with comics drawn on the back of the bottles. They had developed a backstory that the beer was brewed in the future. It was fun! One time when Dimitri came to Chicago, I wanted to introduce him to a bunch of marketing executives I happened to know. I had told them all about Space Beer and they loved it. They were like, “Let’s take this thing worldwide. This is the best thing ever.” So when he came, they tried to chase him down, but Dimitri was running around, having fun. Once they got a hold of him and finally met up, they told him that they wanted to turn Space Beer into a global brand. They were talking about expanding into China and all of these other territories. And all Dimitri said was, “Where is the heart?” Shortly after that meeting, Dimitri and Achim [Kohlberger], his partner at Tresor, stopped Space Beer. I think me introducing him to these US executives alienated him from the project altogether. They wanted a multimillion dollar deal, but he wasn’t having it—he wanted a small, fun company. Their offer and aggressiveness really put him off.

Another project he talked about a lot was The Horse. When I was staying at Dimitri’s place, he told me about it and how excited he was. If I remember correctly, the idea was to build a 100-foot horse with a massive sound system installed inside of it that could be taken all over Germany, like a Trojan Horse—the Trojan Horse of techno. They wanted to take it around Germany and have Love Parade-style open air events with it. But they ran into problems with the councils of a lot of cities, so they never launched it. I’m not sure if it was actually built. His ideas sometimes took too much energy to execute, but this one inspired me to produce a track called “The Horse”. I had an idea of what The Horse could sound like and he put me in a studio right away. It was a small studio in Berlin. I don’t know whose it was. It was nothing like the BMG studio. “The Horse” eventually came out on the Animals EP on KTM. It was the label’s final release. I’m not sure why they stopped. I think Dimitri’s daughter lost interest in it or something. The label didn’t last long, but it was fun nevertheless.