On the scale of things, Actress and Mika Vainio are obscure artists—but in the field of avant garde compositions and electronics, both are significant figures with big enough profiles to headline a festival. Actress (AKA Darren Cunningham) capped off a series of critically-acclaimed albums and a growing catalog of releases on his Werk Discs label with a stellar forthcoming contribution to the long-running DJ-Kicks series, while Vainio carved his name into the canon of innovative electronics with his work in the Pan Sonic duo and under aliases like Ø. In late March, their consecutive individual sets closed out The Long Now, the 30-hour marathon finale to MaerzMusik, a 10-day event that mostly featured contemporary classical composers. Before Vainio took the stage, Actress requested to speak with him backstage, because Vainio has influenced Cunningham since his early rave days. Daniel Gottlieb was there to witness what happened when two of experimental electronic music’s most revered talents met.

ACTRESS: When I started to go raves, I always saw Pan Sonic on posters, so that name has always been a part of my musical journey. I thought it was a really cool name for a band, but I wasn’t necessarily sure what you did. It was always stuck out to me like an object, which is how I see music a lot of the time: moving objects around and building sound-objects; shifting and replacing them. It was almost like the name was informing the music being made. At the same time, I was always unsure whether you were techno or an extreme other. Does Pan Sonic make techno?

MIKA VAINIO: Techno was an important influence when I started making music. In the ’80s, I occasionally played in different bands, but I only started to play music daily at the end of the decade. Acid house and techno were new and really important at the time, culturally as well as for Pan Sonic and my solo stuff. But I must say, I don’t listen to much techno anymore, so I don’t know what’s going on.

A: Was there an aspect of techno that irritated you or frustrated you at any point?

MV: Techno becomes irritating when it’s not working. There’s a lot of techno stuff that somehow, mysteriously, doesn’t catch the groove, and it becomes tedious because it never falls into place. Techno is a curious thing. Small details make a track work. Somehow techno lost its spark for me, but I’m sure there’s good and interesting stuff coming out. 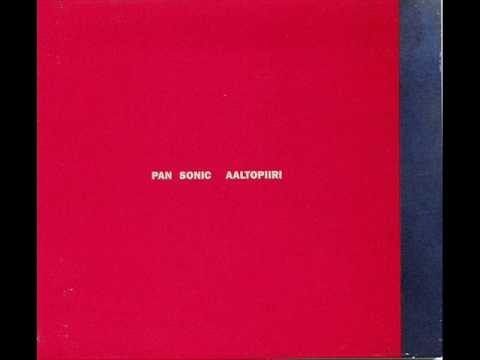 A: It could have been very easy for me at a particular time to have stayed on a techno tip, but I eventually I wanted to completely eradicate the idea of techno. When I heard the use of sounds that Pan Sonic uses, I started to see techno melt away. Pan Sonic goes into a black hole and collapses the idea of techno.

MV: Oh sure—but it was never anything I would do consciously. I just did, and still do, what feels good. I really liked the minimalism of early acid house; people use very little means and a couple of small instruments, like synths and drum machines, to create this hypnotic, repetitious thing. To me it sounded like a continuation of what minimal composers had been developing, and what many other composers were exploring in the ’70s. It combined that with the simplest rhythms in a way that was considered “too primitive” before. There was suddenly a whole underground movement doing it, and it felt really fresh and new, and at that time it was really an underground thing.

A: It’s the same for me. There was a time when all I was listening to was Carl Craig, Derrick May, Juan Atkins and so on—rich sounds, funky basslines, and extremely cosmic vibes in terms of space and escapism. And then it occurred to me that I just didn’t want to make tunes like that. I decided early on that my aim was to split the sounds and remake interpretations of it and the other music I loved. At the time there was no real sophistication to the music. I was using a Roland 303 groove box with a few EFX processors. A very minimal setup attuned my ear to lean towards a particularly lo-fi sound—grey and blue sounds.

MV: Influences are a strange thing. I can never really point out a direct influence from my environment. I lived in London at the end of the ’90s as well, but where I live doesn’t affect what I’m doing. My influences come from paintings, a book or a movie. I like to read and I read a lot, but it happens slowly, and I always read many books at the same time. It’s a lot like music; I choose what to work on or continue depending on any number of factors.

There are writers that I keep reading again and again. One is Claude Simon from France, and then there was a guy from the US called Breece D’J Pancake who wrote about 12 short stories, nothing else, before he killed himself. And now I’m reading a new translation of Charles Baudelaire…

A: I also have a complete book fetish. I buy books all the time, but I only read an excerpt here and there, so the books pile up. The one I’ve brought with me today is Harmonics by Ptolemy, and I’m really fascinated to see what he had to say in terms of harmonic and musical structures. In terms of books I keep returning to, I tend to return to Henri Matisse all the time. The most recent poetry I read was Paradise Lost to help me finish RIP.

MV: Reading a little bit just here and there is a really good approach. If you concentrate you can make extremely interesting connections.

MV: I’m working on a soundtrack for a movie at the moment, actually—a graphic movie. I’m doing it in my studio at home. It’s mainly an electronic soundtrack, but I’m also using some electric guitar and electro-acoustic techniques. I don’t have much experience with films, although I’ve done music for quite a few years on video pieces for artists. Still, this is only the second time I’ve worked on a film. Its been quite easy to work with this director, and I’ve known him for a long time. I don’t need to adjust the music for the movie because he gives me guidelines and doesn’t direct how I make the material

A: I think that’s almost the best situation to work in. They know your style, so it’s a symbiotic way of working.

MV: It can be a very frustrating process if you don’t have an understanding between collaborators. And it’s also frustrating for artists when they feel an audience doesn’t understand what they’re doing. But that’s okay with me, because I don’t really expect anyone to understand my music the way I do. If I play a concert to 200 people, really I’m playing 200 concerts because everyone feels and experiences it their own way, and none of them are wrong. If someone thinks it’s crap, then too bad. But they’re not wrong.

A: Absolutely. While I’m making music time can accelerate until it disappears completely.

MV: Certainly. When I’m creating music, time happens quite differently. When I really get into the process of creation I don’t realize the passing of time. I’m really sensitive to time relations when I approach making different musical styles; it depends on the nature of the music and what time will require. One minute can mean an entirely different thing in two different works. I’m not necessarily talking about making time evolve via structure, because the structure of the music can stay the same. But it requires a different mental process to get really into it the way I want to. For records like Konstellatio, I often waited for the right type of feeling to continue working on it, but in general, if you’re always waiting for the right moment, it easily happens that you get nothing out of it. You can keep putting things off forever and say, “Okay, now’s not the right time, but often you just have to start doing it even when you don’t feel like it.

A: Yes, there’s definitely a moment in music-making when you go into different dimensions, and you’re completely accelerated through different spaces. I like to be playful with time musically, but as a thing, it’s quite serious, and it’s not to be messed with. I almost feel that metronomically, there’s a physical aspect to time, which I have to be quite close to in order to survive. That’s what time is to me. Time is the master.