About half a decade before Mø made it big as the singer on Major Lazer & DJ Snake’s 2015 anthem “Lean On”, she was screaming “Fisse I Dit Fjæs”  (which means “cunt in your face”) as one-half of the Danish punk duo MOR. She’ll always be punk at heart, but these days the vocalist, songwriter and former EB Magazine cover star has reinvented herself as Denmark’s biggest contemporary pop fænomen thanks to hits like 2012’s “Pilgrim” and her Mad Decent outing. Her worldwide success in 2016—which includes an international tour with a stop tonight at EB’s Festival in Cologne—is the culmination of the 27-year-old’s lifelong dream that all began with a passion for the Spice Girls. It’s a common denominator for a lot of women in her generation, and this journalist and fellow Danish musician is no exception.

Najaaraq Vestbirk: As a child, I spent a lot of time dancing in front of the TV singing along to the Spice Girls.

MØ: I didn’t do it in front of the TV; I did it in front of my boombox. I got one as a birthday present when I turned 7 or 8, and the first record I got was Spice, their first CD, and after that an Aqua CD.

Who gave it to you?

My mom and dad, and I was so happy!

I read a story about your first public performance when you were in sixth grade. You said your co-singer cancelled, but you followed through even though it was terrifying. Where did you get the courage to go through with it?

When I was growing up, my mother was the one with the toolbox while my dad did the dishes. I think their subversion of traditional gendered parental roles made me quite the tomboy myself. Did you grow up with any role models that motivated you to be your own kind of woman?

I’ve always been very close to my mom, but for years I was into a sport called orienteering, and my dad was the one driving me around to competitions. I also spent a lot of time with my brother, but today he’s a doctor and back then he did a lot of computer gaming, so it wasn’t like he was some testosterone-driven type. I’ve always loved hanging out with guys, and I guess it’s obvious that it had an impact.

In school I was never one of the pretty girls; I was the sports girl—the nerdy sports girl. When I was a teenager I started wearing black clothes and entered some more alternative scenes than my classmates, so I got role models like Kim Gordon [of Sonic Youth] and Karen O [of The Yeah Yeah Yeahs] and those kind of power-women. I’ve never felt like the classic, beautiful little girl—not that there’s anything wrong with being that. It’s just a role I never identified with at all.

Was it difficult not being able to naturally fit in at school like a lot of the others did?

I thought it was annoying that the boys didn’t want to kiss me and that they never really fell for me. [Laughs] But it wasn’t hard, because despite the fact that I was a bit different, I had a lot of friends and I was never lonely. And I loved wearing my sportswear. It was just annoying the boys didn’t think I was pretty.

Were you down with sportswear before it became fashionable, like when we were children?

I didn’t really think about it. When it did become fashionable, there were specific brands that you were supposed to wear, and we couldn’t afford that.

Yeah, exactly. I actually had an Adidas tracksuit before it became popular.

Did your parents buy you authentic Buffalo sneakers?

No, no—there was no way we could afford them. We got a copy brand, but they were actually pretty cool. My girlfriends got copies that looked too similar to the originals, but mine kind of downplayed it. I thought they were pretty cool, my fake Buffaloes.

You mentioned that it was annoying that the boys didn’t fall in love with you, that they just wanted to be your friend. When did that change?

I’ve always had to fight for it and work with my personality to be charming because I didn’t have the looks. That changed a bit after I got sort of famous, but that’s totally shallow so it doesn’t count at all. I think I was around 19 when I got better at connecting with boys, but the bottom line is that I’ve never been the pretty girl the boys were crazy about. I picked them up by being funny. 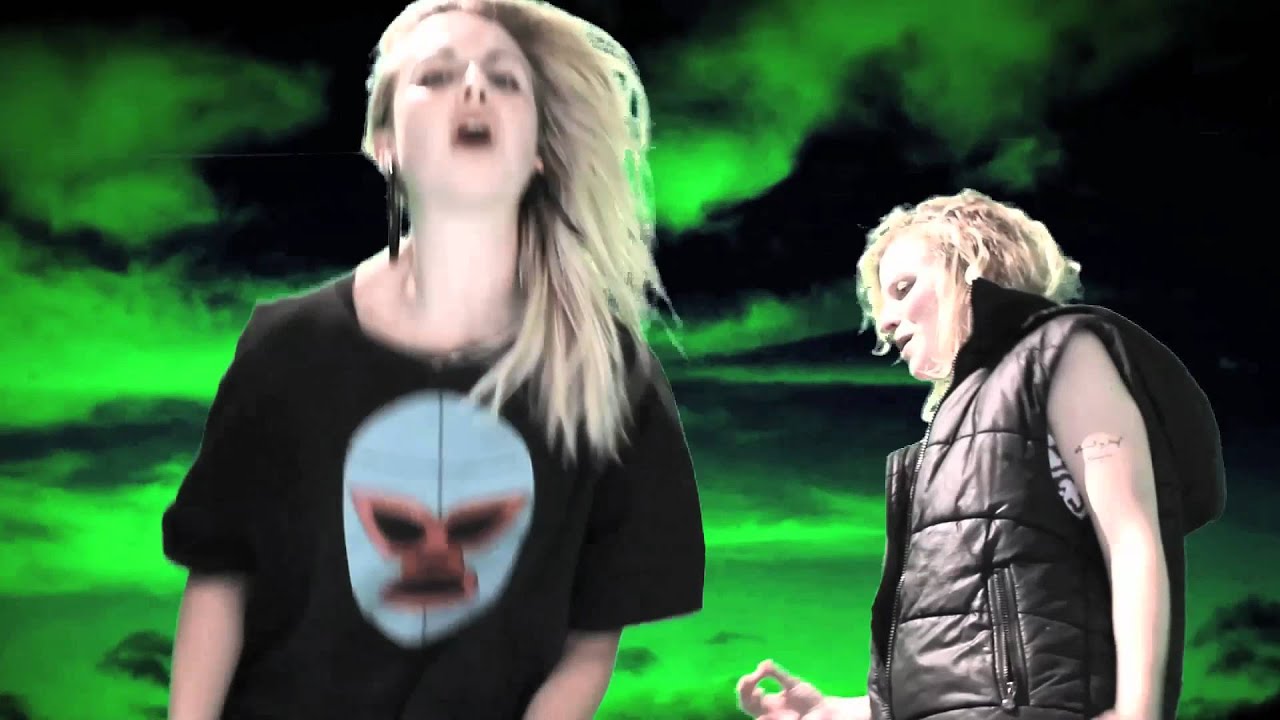 You played in a punk band called MOR with Josefine Struckmann.  What did you learn from playing for a punk audience that you can use on stage now?

I was in that scene for almost 10 years—yeah, 10 bloody years. Being in the punk scene, attending political demonstrations and learning about riot grrrl opened my eyes to what what real girl power was about. In terms of the live performance, playing in a punk band taught me to let go. We didn’t have a band to lean on; it was just me and Josefine on the stage when we performed, so we had to carry the show on our own. And in that scene there was no expectation of how you were supposed to act onstage if you were a woman. It’s clear that the way we did it back then still sticks for me: you don’t have to perform in a particular feminine way. You just had to be yourself and run amok.

When you were talking about women like Karen O and Kim Gordon, you mentioned a difference between contrived girl power and the real thing. Those women obviously had a lot of control over their careers. Are you a bit of a control freak as well?

Yeah I am, but not with a lot of things in my life. I get really mad if someone tries to alter the way I am or if someone comes to me with an idea that they want to pass off as my own. I don’t know if I should go into the details…but there are so many people involved in my life and my career, and I’m only one person, so it’s completely impossible for me to handle everything myself…

When did it become difficult to delegate?

It’s been difficult from the beginning, ever since more people got involved with the project. It was hard from day one. I still think that. I’ve become better at saying, “You know what? Fuck that.” I can’t control everything, because otherwise I’ll get mad, and I just don’t have time to do that. I have to focus on what is important and learn how to prioritize. But yeah, it sucks when something comes out and you’re a bit like, “That wasn’t 100 percent like I wanted it to be, and I don’t want people to think that this is what I perceive as cool.” But on the other hand, you can’t control everything. That’s a pity, but the bottom line is that it will be forgotten in a couple of months.

When was the last time you had to do something really scary?

Actually, that happens pretty often. All the TV performances I did were intense—not in a bad way. But I did think I was going to die right before I went on stage.

Do you get a rush out of it?

Yeah, I always get giant kick. But right before, my mouth dries out and I’m totally nervous. People think that if you’ve done this a lot, that if you’ve been in this line of work for a while, then you learn to stay cool. But I’m still a total softie before I have to go on stage. Last time I was about to pass out was at Major Lazer’s set at Coachella. I had to take over right after Usher.

Because you are a big Usher fan?

No, actually, not really, but Major Lazer was playing the main stage at Coachella, which in and of itself is pretty scary. On top of that, Usher was on right before me, and I thought it was terrifying that I had to go on and grab his mic.

But it went alright?

Mø will perform tonight, May 19, at the Gloria Theatre for the EB Festival in Cologne. Buy tickets here.