Muting The Noise, the record store and distribution headquarters run by the Innervsions label, is nestled on the top floor of an old Kreuzberg walk-up. It’s the kind of place where visitors need to be in the know in order to find it, as there are no signs or logos visible from the street or the door where all guests must be buzzed in.

The clandestine nature of the store, however, is part of its incredible charm. Unlike other and more famous Berlin music retailers in the same neighborhood like Hardwax or Spacehall, Muting The Noise is free from pedestrian traffic. But as the Innervisions co-founder and Âme originator Kristian Beyer put it, Muting The Noise isn’t a normal record store—it’s a creative space. “We’re not competition to Berlin record stores,” he said as he sat on one of the room’s minimally designed taupe leather couches. “We more had the idea to just sell the records we release and to let people kind of see how we work. I like to compare it to haute cuisine, or high-class kitchens. Most of the big, famous restaurants have you sitting in front of the kitchen so you can see what they make and how they work. So this was kind of the idea.”

The Muting The Noise team delivered on this concept by positioning the heart of its distribution center, where batches of records arrive from the pressing plant to be disseminated to retailers, directly to the right of the entranceway. Visitors are greeted with floor-to-ceiling shelves full of records hot off the press, various shipping materials and a small office space where the supervisors make orders and manage the label’s internal affairs. The pitched rooftop ceilings are even lined with display records for sale in the store, though some of them, as Beyer explained, are actually from his personal collection. “The top row of records are all of mine, records I like. It’s not club music, but it’s just to show the people what we listen to in our free time and where we get our inspiration from.” His selections range from the balearic stylings of Talaboman, the funky house collaboration between Axel Boman and John Talabot, to the lesser-known Afro-classical compositions of the Malian orchestra Le Super Biton National De Ségou. 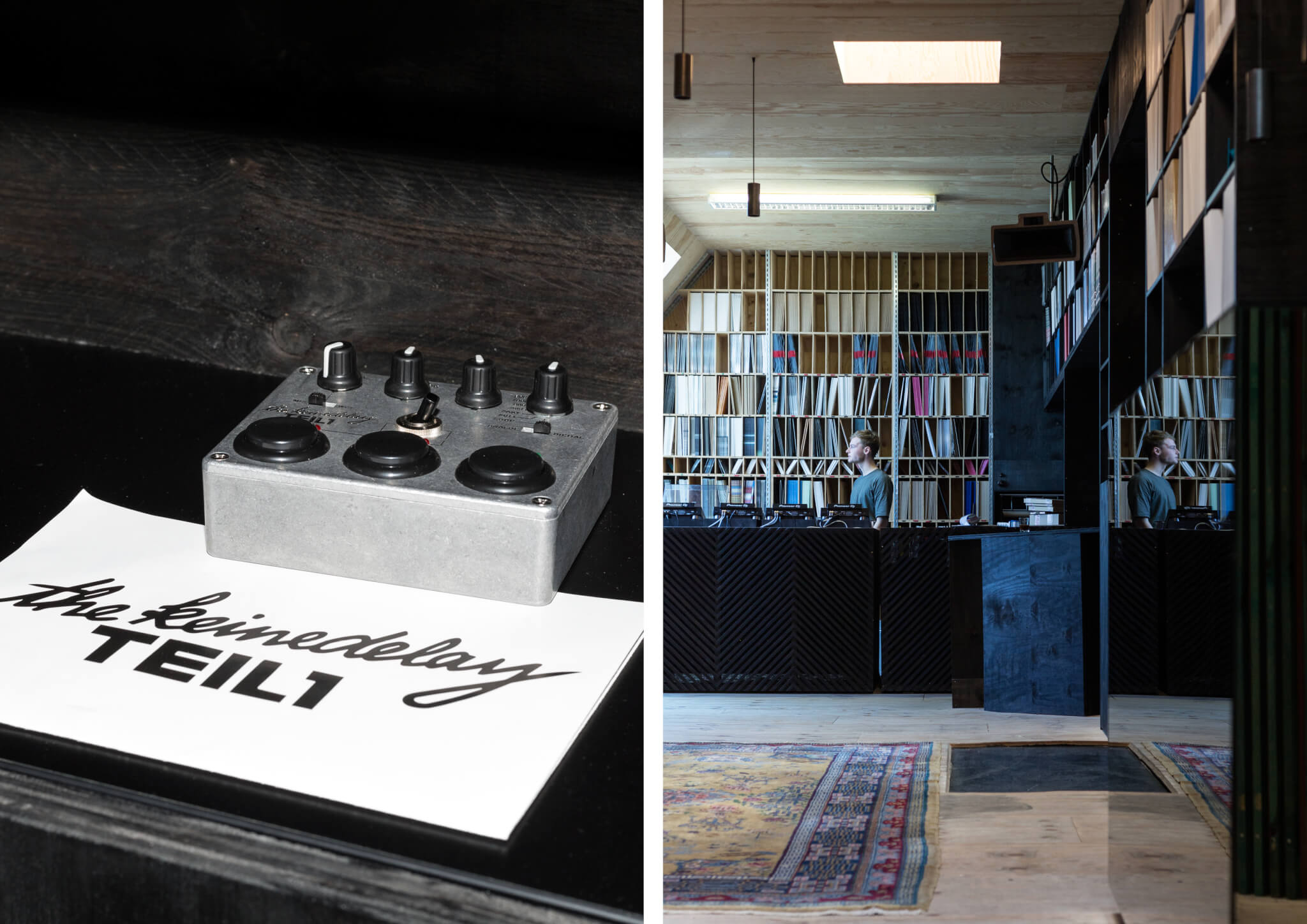 Muting The Noise allows guests to see into the inner workings of the imprint, the staff that runs it and the diverse musical sources that guide its vision as well as the label heads’ individual studios. On the left-hand side of the cozy attic room is a semi-circular structure composed of turquoise wooden beams and elongated windows where Steffen Berkhahn (a.k.a. Dixon), Frank Wiedemann and Beyer have their personal workspaces. The producers have been visiting the space on a nearly daily basis for four years and steadily crafting the music they then release and distribute in the adjoining room.

But Beyer says getting to this point took the trio a lot of work and many years of triangulating and pivoting their vision. “Muting The Noise is the result of a long process,” he said. “We have always wanted to open a centralized location like this, but back in the day we were in different cities. I was with Frank, my partner in Âme, in Karlsruhe, and Dixon was here in Berlin. I had a record store for 11 years in Karlsruhe, so I have this record store history somehow. I closed the record store and moved to Berlin with Frank, and it was the first time we ever had an office. People started picking up records in the office that they ordered on our website, you know, and we were constantly thinking, ‘What else can we do for these customers?’” The answer, of course, came six years later when the trio inaugurated the Kreuzberg loft.

While Beyer’s dedication to creating a direct channel of communication with the Innervisions clientele began with the idea of opening an official space for them to sell their records, it has since evolved into creating a carefully curated music discovery experience. “We started with self-distribution because we thought we needed to do it and we weren’t happy with the whole situation with the distributors we had,” Beyer explained. “From then on, friends—like artists we know and have been friends with for many years—they saw that this was working. They’d ask us, ‘Can we join the distribution?’ So we’ve grown a lot as we’ve started to release music from other labels as well. But it’s still just a narrow group of imprints that we’ll distribute. In the end, it’s my and Dixon’s decision who we’ll sell in the store.” 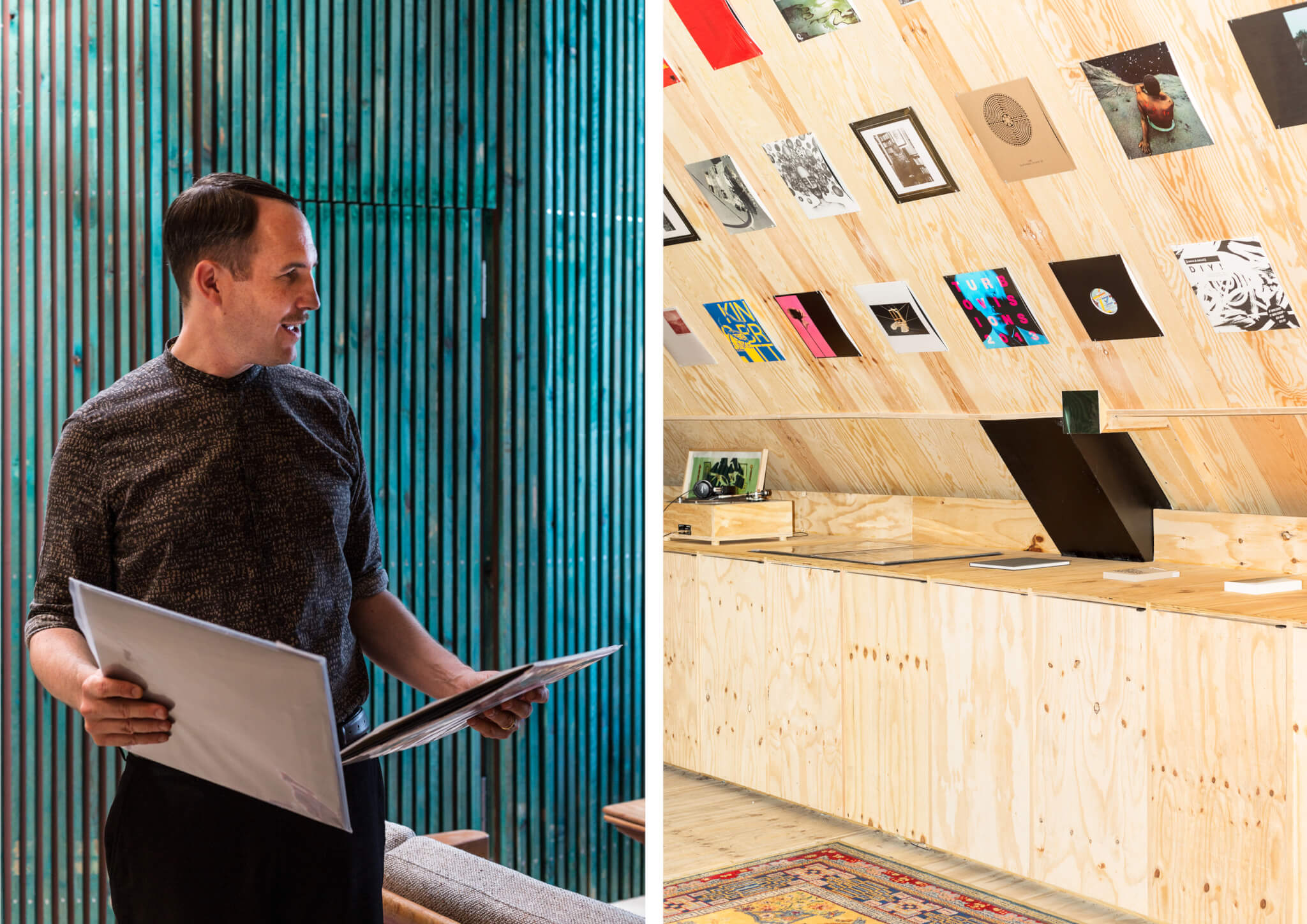 This “narrow” selection, however, is still fairly extensive. In addition to selling some of the usual suspects—kindred house-minded labels like Running Back, Kompakt, Rekids and Honey Soundsystem—they also stock more esoteric and lesser-known names and a host of small German imprints specializing in balearic flare and balmy, lush atmospherics. The selection is the result of years spent assessing the music that their Innervisions fanbase has gravitated towards and then honing the specific records disseminated by Muting The Noise itself. “Of course, I have a wide background, but we also have core fans,” Beyer said. “So when I’m ordering records, I try to stick with what I think they’ll like.”

This evolving practice has recently been bolstered by the advent of in-store parties, during which invited artists can “just play their favorite records to people on an audiophile sound system” and expose attendees to the outer limits of jazz, afrobeat, dance and house-derived musical leanings. “We wanted David Mancuso-style events. We want to give more life to the space, but we want it to happen naturally,” Beyer said while demonstrating the immense capacity of the room’s Klipsch monitors and Floating Points-designed rotary mixer.

“It’s not easy touring, making music and running all of this,” Beyer lamented. And even though he and his partners have hired lots of people to help oversee the store as well as the distribution and booking arms of the label, he expressed apprehension about the number of still-unfinished projects that remain on the team’s long list of aspirations for the space. “We don’t find the time to be here enough,” he continued. “At the end, we’re the people giving the creative impulse, and if you’re not here, it can be tough. We also all have families and kids. It’s not easy, but I don’t complain.” 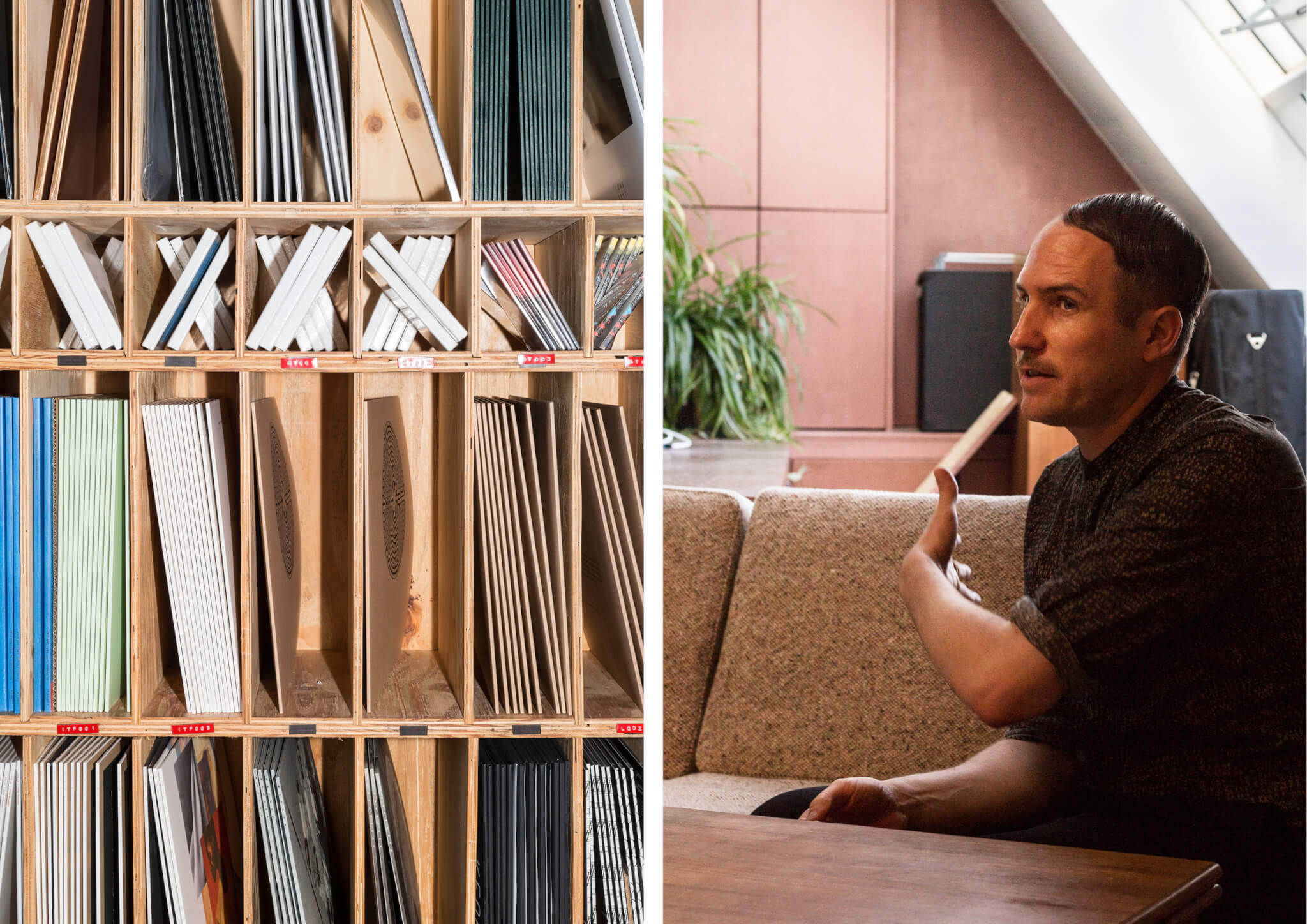 When asked what unrealized goals he had for Muting The Noise, Beyer gave a deeply resigned sigh. “We really want to give more life to the space and do more events,” he said. “We want to give back to the community, especially here in Berlin.” Beyer and his colleagues have also tried to expand the merchandise on offer by selling books and magazines, and they’ve even embarked on plans to renovate a separate annex of the building to be dedicated exclusively to the booking team. “We’ve never put enough focus towards all of this because we haven’t had the time,” he said. “We’ve come far with our plans and dreams, but there are still some things we can do and want to extend.”

So far they’ve succeeded in establishing a highly centralized operation that champions their own label and gives back to the Berlin community and the like-minded imprints that are taking root. And in talking to Beyer, it’s clear that Muting The Noise is not just about the Innervisions brand: it’s truly about the music. “Mancuso has always been a big inspiration for how we think about the space,” he said. Like The Loft in New York City, Muting The Noise is a meeting point for a small group of music enthusiasts with a yearning to share niche tunes and a profound thirst for knowledge. “It’s not about getting money,” Beyer affirmed. “It’s more about having a place that can support our community. In the end, that’s the most important. This is where we live.”