In the music video for “Mazdâ”, a shaman in a space helmet smokes a bong in front of a flag that reads “Jerk Off In Peace.” Chinese choreographer Beio bursts from a slippery pool like Venus on the half shell, his body sponged in white paint like a Butoh dancer. Thick gold chains tangle with fetish gear and beards dyed Easter-egg pastels. Teeth gnaw raw chicken carcasses against strobing, seizure-inducing collages of third eyes and Tibetan swastikas. A dwarf weeps. Throughout, Aïsha Devi’s eerie, inhuman voice swoops and dives like a raptor.

Devi first encountered the work of Tianzhuo Chen through the latter’s solo exhibition at Palais de Tokyo in Paris. The space was lit like a rave, occupied by hybrid bodies and strewn with references to the sacred (Buddhism) and the profane (sex, manga, drugs). Chen’s vision, which celebrates kitsch and the grotesque, corrupts the iconography of religion and pop culture. “Mazdâ”, which was directed by Chen and released alongside Devi’s debut album, Of Matter And Spirit, marked the first phase of their collaboration. In a recent conversation conducted over Skype, the two artists discuss the making of modern-day rituals. 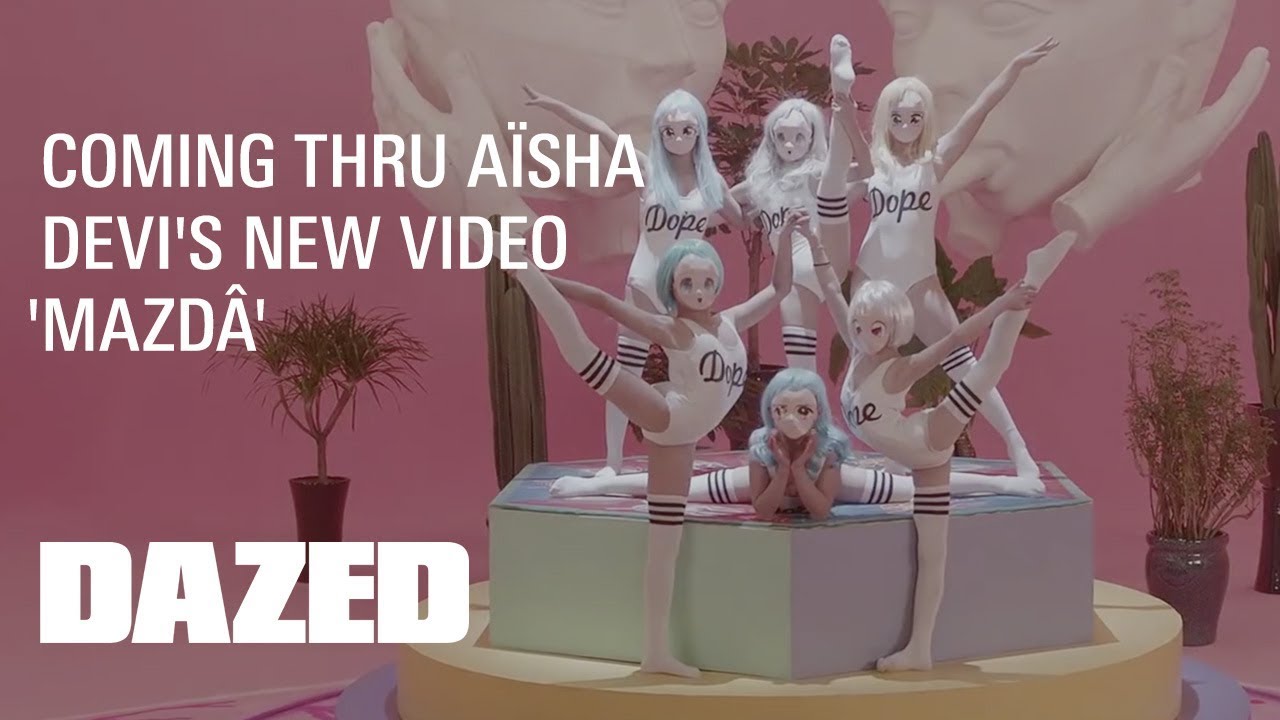 Aïsha Devi: The first time I saw your cosmos, I felt it mirrored what I was trying to do in music, which is to de-sanctify the symbolic and make it your own; to invent a new codex, a new language. It was as if I was jumping into a world that I knew already, and I loved the aesthetic. We’re both talking about ancestral knowledge in a very contemporary language. I was also really intrigued because you’re a Chinese artist, and that means you belong to a very specific system.

Tianzhuo Chen: I don’t produce myself, but your music made a lot of references to my religion [Tibetan Buddhism]. For me it was something really fresh.

AD: We played the first time together at Berghain for CTM. I don’t know what your perspective was, but I felt the music and the visuals and the dancing were one organic, transcendental ritual. Everything worked together. The idea of life for me now is the idea of five dimensions, where all your senses are assimilated. That’s why I’m really interested in working with you. The whole music scene is changing. You’ve got the idea of transversality, meaning that we’re combining different media together to build a new world. I don’t know as much about the current contemporary art scene, but I’ve felt that kind of opening.

TC: Essentially what I want to do is extend my work to another dimension or another plane. I don’t want to just put myself into a contemporary art scene, I want to work with different kinds of music and dance to create something really different. New rituals, a new religion. I’m really fascinated with the idea of sacrifice, and that power of wanting to sacrifice yourself for something. That was the idea for our performance; we tried to bring that energy out of the audience.

AD: I think we have that same idea of collective transcendence—a kind of new cult. Nobody believes in religion anymore. Religion is exclusive, and spirituality, for me, is inclusive. We are now in a capitalist society and we have new mantras: Just Do It. My idea is to bring back the ancient mantra that can heal the society and can gather and rebuild a new community based on self-empowerment and being free from any system. That’s also why I wanted to ask you about pornography. What I like about your work is that it takes back the body as a platform for experimentation. That’s also what yoga is and meditation is. Our body doesn’t belong to a system of rules or propaganda. That’s why the Butoh dancing and the modern ritual of sexuality is very interesting.

TC: Butoh dancers are trying to deal with the dark side of the social environment and free themselves, to offer the body to some kind of spiritual thing. In Butoh, you see people struggling in their body and with the dark side of themselves. But the way I’m using Butoh is different than traditional Japanese Butoh. I add a lot of contemporary elements. I want to show some absurd quality of the dance, so sometimes it’s a bit kawaii—a bit cute. But on the other side, it’s spiritual. There are two different levels of expression in that dance. I think that is also what worked well with your music: it’s not just one layer of emotion, it’s something really contradictory.

AD: The tension—that’s what I really feel when [Chinese dancer and collaborator] Beio is dancing. He’s in his own, very modern trance. His body language is transposing the ancient knowledge, the ancient rules, the ancient tradition with an interpretation of our modern society. People don’t want to follow some ancient cult that has nothing to do with their modern life. It’s the integration of all this knowledge that makes a kind of subversive new language.

TC: The function of art is posing questions to society, especially in China, where everything is being monitored. They need something different, something totally rebellious to the political thing. My work has more to do with religion and symbolism.

AD: We are the outcasts. I know that I don’t want to belong to the mainstream and I know that what I’m saying in the press and in my songs is not mainstream. It’s like the whole world is a dogmatic society. But for me, you transcend the Chinese question. You’re not just subversive in China—you’re universally subversive. I wanted to ask you: why did you go back to China after you studied in the UK?

TC: The answer is really simple. There are so many artists in the UK; everyone on the street is an artist. They can’t give enough attention to even their local artists. But China’s contemporary art scene is far behind any other European country, so there are a lot of boundaries waiting for you to break, and a lot of space waiting for you to grow. You can do something challenging. That’s the cool side of the bad thing about being Chinese.

AD: I don’t live in the UK for the same reason; it’s saturated. In Switzerland, it’s so boring. Everything has to be invented. If you want things to happen, you have to do them on your own. But I was touring as a lonely artist for a long time, and now I realize how collaborative effort is so much more fun, and the more you involve people, the more your art becomes alive and interesting because you have different perspectives. I have the feeling that you trigger a kind of community and I like that you involve dancers, make-up artists… I don’t know if you agree with me, but we’re kind of a new tribe.

TC: Working with different people like you or dancers or other artists—we’re making something more interesting together that I couldn’t do alone. You’re actually pushing yourself when you’re collaborating. You learn something.

AD: And you don’t want to disappoint others. But that also brings up that very contemporary idea of where the music scene is going, meaning that the ego should be tamed a bit to make your idea more comprehensive and more universal in a sense of gathering people. The less ego there is, the more enlightened the art is.

TC: When you come to Beijing for the opera project we’re working on, you’ll be able to feel the society I grew up in and how everything is monitored here. I think it’s going to be really different experience.

AD: I always get an insider’s view when I tour in Europe. Promoters become friends. And in China, I’m not going to be a tourist with you, I’m going to be with the new generation. I’m so curious about how they react to the monitoring culture and what the taboos are. Is there an official art scene in China now or an underground art scene?

TC: There are certain topics in China you can’t mention in your artwork, otherwise you’re going to get in trouble. Things that are political are the most taboo topics. [Government officials] monitor music more than art, actually. In China, art doesn’t have so much of an audience, so sometimes they don’t give a shit about what artists are doing. So most of the time I’m okay, but a bit nervous for the performance because I’m not sure if they’re going to let people come in or shut it down. That’s a real possibility—that it gets shut down in the middle. That happens all the time.

Our performance is going to be very underground. To put on an event in Beijing—or everything you do—you need to apply for permission, but I never get permission for the performances I do, so we need to do it secretly. That’s why we don’t sell tickets.

AD: That’s fantastic that the content will not be censored because the performance is still secret. It’s kind of a kind of subversive act. I wouldn’t have done this for an official platform, never. To me, whether I should go to China or not is still a controversial question. But if I can infiltrate that underground scene and send a message, it’s even more powerful than not going at all.

All images shot by Qiananarchy Zhang at CTM Festival 2016.