I’ve been composing electronic music since I was 20, which was 10 years ago. I started by producing hip-hop, and that’s why sampling has always been very important to my approach to production. I usually sample or “borrow” from music that’s often unreleased and usually made for advertising, documentaries, TV shows or live performances, and digging for sound sources has taught me a lot about Soviet animation and film—not to mention the composers who wrote music for them. And it’s from this body of knowledge that I’ve comprised a guide to some of my favorite Soviet movies.

Mikhail Zaplatin shot more than 100 “travel movies” in his first 50 years of creative activity, most of which are devoted to the nature and people in Siberia and the Ural mountains. This film explores Russia’s popular pastime of gathering—or “hunting”—mushrooms. The main tracks on my True White 12” that came out on Gost Zvuk last year were based on the soundtrack for this documentary. If you run through it, you can hear which bits I used. But I was also trying to recreate the film’s mood; “True White,” or “Nastoyashiy Beliy,” is the Russian name for white porcini mushrooms, so we printed the tracks on white vinyl and stamped little mushrooms by hand on the b-side.

Vladimir Pekar is a Soviet animated film director who was also the creator of the animation training program at the Soyuzmultfilm animation studio in Moscow. The animation in this cartoon impressed me a lot because I’m a huge fan of shamanistic jungle and tribal vibes—it’s a pretty unusual theme for Soviet-era Russian animation. But the soundtrack by Eduard Artemyev interested me even more. Artemyev is definitely one of Russia’s most prolific electronic and film score composers, and outside of the country he’s mostly known for the music he created for films like Solaris, Stalker and Burnt By The Sun. Some parts of the soundtrack are included on my recent record Jungle TV, which was inspired by the mood of this cartoon.

Vladimir Kobrin started his filmmaking career with science documentaries and later turned toward philosophical films about the world and mankind’s role in it. After graduating from the department of camerawork at the VGIK, Kobrin worked at the Studio Of Popular Scientific Films in Moscow until the late 1990s. His unique approach to nature documentaries was never embraced by his contemporaries in Russian cinema, but nevertheless he was able to unite his coworkers and students under the banner of a creative team called the Kobrin Screen Studio. I find his filmmaking absolutely perfect and totally unrepeatable. His style is metaphorical, imaginative, philosophical and avant-garde—a combination that’s pretty unexpected in his home country. When the musicians from the band Ray wanted to collaborate with Kobrin, he decided to conduct an experiment by creating the musical themes for the film in conjunction with Ray bandleader Sergei Busakhin before they even started shooting.

Kobrin also had a singular approach to voiceovers. After failing several times at recording a voiceover, he realized that the moving image is so interconnected with music that any words distract from it. Subsequently he refused to use voiceovers in his films. Vladimir’s love of music and the idea of a “film without words” was essential. In his last years, he made films based solely on music and sound effects. However, I’ve never sampled Kobrin’s films. I’m more inspired by the mood I get from watching his films, which appears in all my musical works. 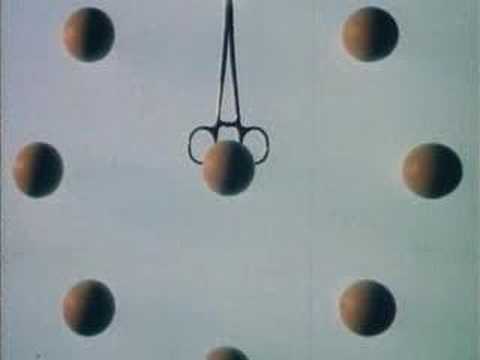 This documentary is about the chemical industry in the Soviet Union—specifically rubber production in all its forms. I used some parts of the soundtrack in previous tracks because its ambient, jazzy vibe impressed me a lot. This is, again, a really nice example of a Soviet popular science film with a perfect, smooth jazz soundtrack. “Blesk” from my True White EP was partly based on the original soundtrack of this movie, which was relatively unknown until now.

Nikolai Sergeevich Korndorf was a Russian/Canadian music composer and conductor. He studied composition at the Moscow Conservatory, where he later taught. His early works were written in a traditional academic manner until he adopted an atonal post-expressionist style. He later turned to a kind of minimalist repetitive aesthetic. In 1991, Korndorf left Russia for Canada, where he began experimenting with electro-acoustic media and taught at the University of British Columbia. I have a collaboration with Flaty (aka AEM Rhythm Cascade) called Dismissed Relations, and together we sampled the movie’s main theme that appears at the beginning of part one for a track that will appear on an upcoming release due out in mid-July. Flaty and I were really fascinated by the music’s mysterious vibes and tried to keep its atmosphere.