Tucked between the brothels of Amsterdam’s infamous red-light district, there’s an inconspicuous looking shopfront halfway through Zeedijk, one of the main streets of the Nautical Quarter, which was formerly frequented by sailors and is now lined by Vietnamese, Thai, and Chinese restaurants. Inside the small store, its white walls are lined with the latest sought-after sneakers, apparel, and accessories with the ubiquitous Patta logo printed on them–from hats, mugs, jacket pins, to clipper lighters.

The iconic Patta logo is so synonymous with Amsterdam, it’s almost impossible to spend a day in the city without spotting it on someone in the streets of the Dutch capital. I first encountered the shop last year, on a visit with Mor Elian and Dutch DJ and former De School resident Cinnaman, who took us on a tour of the neighborhood after taping his Visible Spectrum show in the former Red Light Radio studio. Within minutes of entering the shop, he’d convinced Elian to pick up Patta’s cleverly designed “DJ/Utility bag”, a multifunctional “digi-DJ accessory with compartments for all modern-day DJ essentials such as headphones, USBs, SD cards and extra wires.” The bag included a removable passport pouch to be used while travelling, a strap, belt, and additional cord for a variety of wearing possibilities. “You need to get this before it sells out,” he said, acting as a de facto salesman. This practical and thoughtfully designed DJ accessory is only one of the many stylish and functional products the brand has released specifically with the music community in mind.

Founders Edson Sabajo and Guillaume ‘Gee’ Schmidt met whilst working at the seminal hip hop record store Fat Beats and launched Patta in 2004 as a supplier for American brands (they were one of the first places in the Netherlands to import unique sneakers from across the pond.) “The sneaker industry that we know now was very different back then,” Brand Director Lee Stuart tells me. This was the first time, “brands started making sneakers specifically for sneaker-heads,” and even a simple varsity jacket was almost unfindable in Amsterdam. Describing what Patta has since grown into becomes an almost insurmountable task when considering the variety of projects it has been involved in over the course of the following fifteen years. In its essence, Patta is a lifestyle brand with stores in Amsterdam, London, and Milan, a record label, a blog, and a curational force in both the fashion and music industry. To many people in Amsterdam however, as Cinnaman tells me, “Patta is a family.”

With its deep roots in the city’s music scene and bespoke approach to every project, Patta is one of the most beloved independent brands streetwear culture today. Aside from their high-profile collaborations with brands like Nike, adidas, Converse, ASICS, Reebok, KangaROOS, New Balance, and Awake, Patta continues to push the envelope with their musical collaborations (one of their newest drops includes a tracksuit and 12-inch vinyl with UK jazz legend Yussef Dayes), while continuing to stay deeply rooted in their community with their project Soundsystem and through uplifting local talents by working with a diverse cast of characters across the Netherlands (this year’s AW collection was modeled by Rotterdam-based DJ Suze Ijó and styled by Mairo Nawaz, a close friend of the label and rising DJ in his own right).

Patta Soundsystem are also a curational force in music—their Instagram page (which boasts close to 50 thousand followers and is updated daily) presents a mix of archival material from iconic moments in music history, such as MC Lyte performing ‘Poor Georgy’ on “In Living Color“ in 1991, or an appearance from D Double E in 2004 from the DVD “Lord Of The Decks Vol. 2” with original material from Patta, such as exclusive images from their merch drop for “Summer Dance Forever” to support the annual dance and theater festival which was impacted by COVID-19, sprinkled throughout. 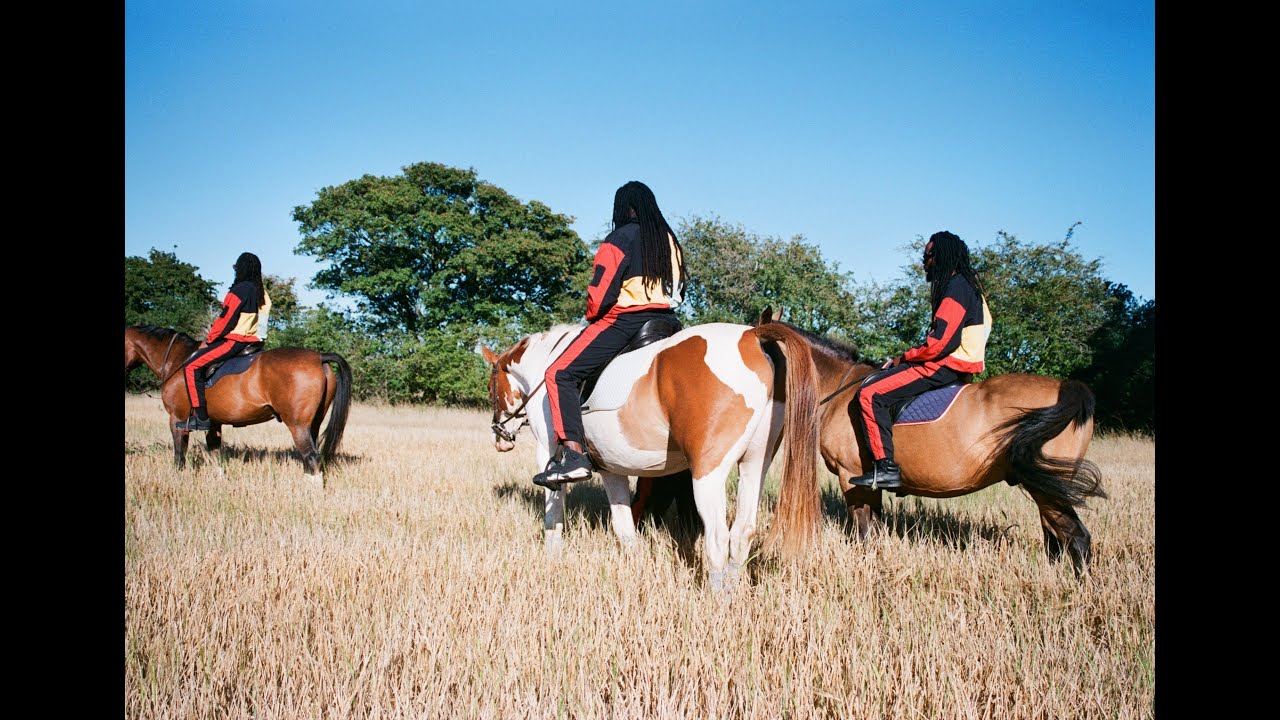 We caught up with Lee Stuart and Victor Crezée, Patta’s musical director on a sunny afternoon in their office’s courtyard in Amsterdam-West to talk about Patta’s commitment to the underground music scene, working with kindred spirits, and the cross-pollination between different cultural forces.

Talk me through Patta Soundsystem’s origins and ethos

Victor: One of the first Patta Soundsystem projects [although it didn’t] have that name yet, was a mix tape that they did in 2005 with 20 songs that were all exclusively made for the shop by Dutch rappers, talking about sneakers. Nowadays, we have the shop on the Zeedijk, but in our old location, we had a skate shop called Ben-G on the ground floor, on the top floor you had Pieter Janssen aka Piet Parra [who has his own eponymous brand], and in the back office there was a famous Amsterdam DJ-slash-radio personality called Mr. Wix. He had a lot of club nights going on, and he was always on the forefront of mixing old and new music, and especially eclectic sounds, like pairing a punk track with a trap song. So, within that building, a lot of people worked together as well–it all happened very organically. Hip hop connected us–we all have a really, really deep-rooted love for it and everything we do [comes from] that hip hop attitude.

Patta Soundsystem is such a wide ecosystem of sorts–there’s the mixtape series, curated events, parties, and a DJ collective…

Victor: Patta used to go to a lot of sneaker conventions, fashion weeks, things like that. But because Amsterdam has such a rich DJ scene and we’re all involved in that scene, Patta would always bring a couple of top class DJs along from Amsterdam, or DJ friends from other places— let’s say Berlin, or wherever.

Lee: Wherever we are. We’re just opinionated assholes, basically [chuckles]. So, we’d would be like, “Oh, you want Patta involved in your party? Well, we’ve got to have good DJs.” So Patta would always bring the DJs along…

Victor: Under the name Patta Soundsystem. At a certain point it kind of organically evolved in something bigger than that–a proper DJ collective. [We starting building out a residency] of four or five DJs who were always part of the Patta Soundsystem. But all these individuals did different stuff. It wasn’t really one cohesive, coherent group because we wanted to broaden the spectrum of music we were involved in.

Lee: I think it also comes down to growth, right? Because all these DJs, they grew in their own direction. So now, more than being a part of a collective, they really are their own entity. For example, if Yuri [Cinnaman] is always on the road in, whatever, Latvia or Brazil, or India playing somewhere, he can’t come with us Patta to Paris Fashion Week. It’s like that.

Victor: Yeah. And also, under that umbrella at that time, as a DJ you would always play for that party more than for your own identity. So yeah, basically we broadened the spectrum and thought, let’s not do the collective anymore, because everybody’s doing their own thing. But let’s see how we can expand this and turn it into more of a curational [platform]. So, let’s say if we do an event at Fashion Week, we’d call the event Patta Soundsystem, and create something with Amsterdam people involved, but also outside artists that we love, that fit that particular night. And those nights can vary from, for example, a techno night called “Ballistic Rave” that we did at [the multidisciplinary venue] Het Hem in Zaandam, to a jazz night we did in Milan, to a hip hop night in Amsterdam. We’re all music lovers, and everybody has their individual taste and styles–we try to bring all that together and to make people aware that there is more than just techno, or more than just hip hop, or more than just… whatever, you know?

Yeah. And especially nowadays, the idea of genre-free DJing is widely accepted and appreciated–a lot of people in our scene don’t think in categories as much as they might have before.

Victor: Especially in Amsterdam’s nightlife. Because the city is so small, there was always musical cross-pollination of some sorts. If we like this certain DJ or artist or whatever, who only does techno, and we like him, we will put him at one of our events, because we love it. And maybe that event we think, “Hey, this event could be dope if we have this techno guy and this jazz guy, and this hip hop kid…”

Lee: Or roots reggae. Eclecticism has always been an Amsterdam thing for sure. You can go to a lot of clubs on one night. If you’re feeling like I had enough hip-hop, you can go to a techno party. It’s all like a five minute bike ride. That’s a big plus.

I guess that’s what I was getting at.

Victor: And I think we feel the need to also break those barriers with the projects we do, or the events we do.

Lee: Actually, with everything we do. Even if we’re not just talking about music, we always try to go for the surprise effect. Going left field has always been a part of Patta.

It seems like a general ethos of the brand, for sure.

Lee: Yeah, for sure. Because then you broaden people’s horizons and offer them something new. And it keeps it interesting for us as well.

One of the things I always hear about Patta is this idea of mentoring folks who come to work for the brand and making them be able to forge their own path in within the company’s structure.
Victor: We do work like a family business. If somebody [in our community] says, “Yo, what can I do?” We give them a chance to do something. And sometimes it works out, and he or she goes on to be someone who does logistics [for example], and sometimes it works out. That’s where it started with me actually. Because I was a young kid who used to go to that record store. And I didn’t really want to leave, because I thought these guys were super cool. At a certain point they saw how interested I was in music, and that I could do a little mixing and stuff like that. And then Edson [Sabajo], one of the founders, kind of took me under his wing. So I became his protégé. This type of mentoring really stems from Edson and Gee being those types of individuals [who put faith in you].

Patta is famous for its high-profile collaborations. How do you decide who to collaborate with?

Victor: Our collaborations are usually people we already have some sort of a relationship with. Or we really like a certain artist. We never really work with somebody, we never really call somebody up, “Hey, I like your music, let’s work together.” For example, we’ve known the Dekmantel guys [before they even started the festival] and we always liked their curation, [so working with them was a natural fit]. And if we look at some of the artists we’ve collaborated with, like Dreamcast, we really liked his humor and his music, obviously, so it made sense for us to work with him. It’s just a feeling you have. You like the music; you like the people.

This interview has been edited and condensed for clarity