Baku, the capital city of Azerbaijan, straddles a bay in the Caspian Sea. It’s an oil-rich city that lies at the intersection of the Middle East and Central Asia, and it’s had a tumultuous history. The influx of money that its natural resources has brought in has been accompanied by designer clothing shops and luxury car dealerships, as well as posh and glitzy nightlife. The majority of Baku’s clubs are still largely defined by people smoking hookah and listening to a mix of Western, Russian and Turkish commercial pop music with rows of expensive SUVs double-parked outside.

Hidden behind Baku’s deceivingly opulent façade, however, is a city that many local young people describe as stifling and despondent, where good places to go out are few and far between. Unlike Tbilisi, which has recently gained international recognition for its innovative club scene, Baku offers surprisingly little in terms of dance clubs despite being the largest and wealthiest city in the Caucasus.

But a group of techno enthusiasts are trying to break the mold. iN, a club that recently re-opened in a new location, offers locals a taste of rave culture as epitomized by such clubbing behemoths as Berghain and Bassiani. The club’s name comes from the Azerbaijani word “indi,”—which translates to “now”—and captures the now-or-never mentality of the people behind the project.

Natig Ismayil, a techno head in his early thirties who is also the club’s co-owner, has played a pivotal role in bringing quality electronic music to Baku. Back in 2014, Natig and a group of close friends discovered Tbilisi’s bustling club scene and became enamored with techno music and rave culture. Undeterred by the seven-hour drive from Baku to Tbilisi and the long queues at the border, weekend trips to Georgia became something of a ritual for the six-person iN crew, which is comprised of Farid, Mikael, Elvin, Mamed, Minira and Natig.

“At some point, I was going there every other weekend for six months straight. That’s how dedicated I was,” Minira, one of iN’s core team members, explains. 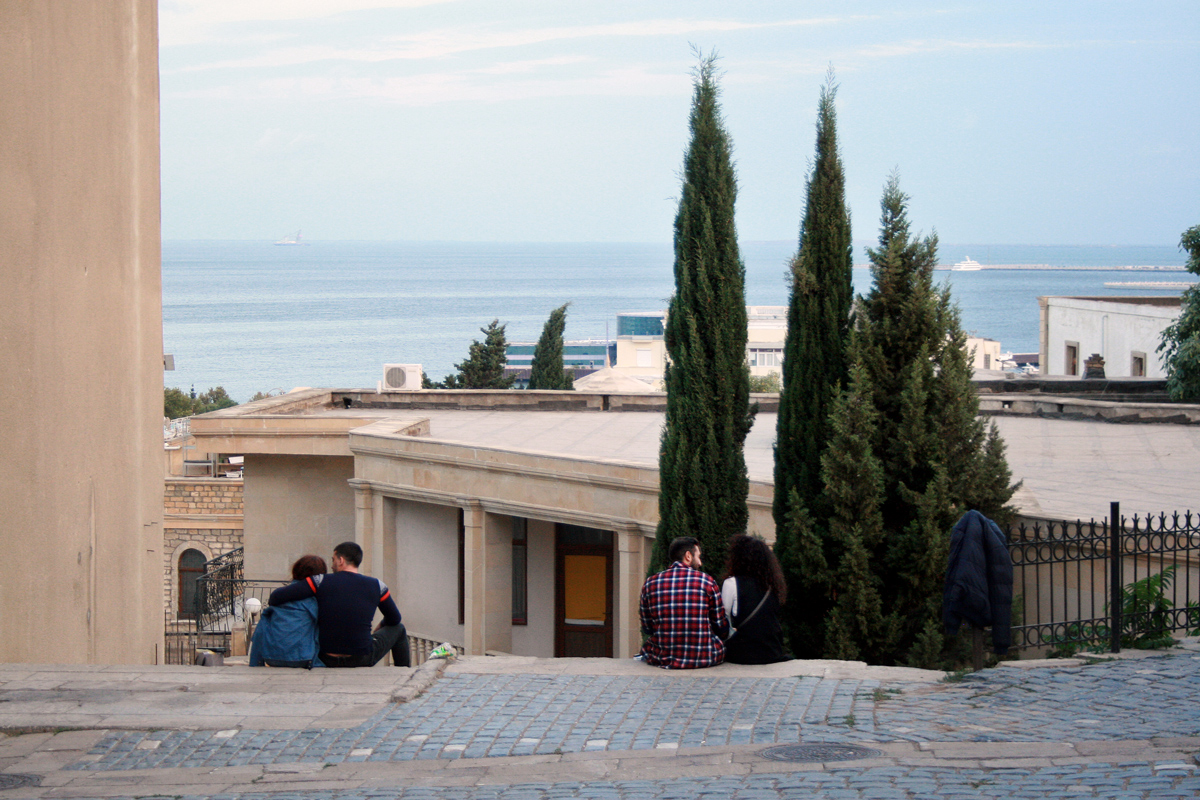 Deprived of access to techno clubs at home, a generation of Baku partygoers made Tbilisi their clubbing home, earning themselves a reputation as some of the most ardent ravers on the dance floor.

“We were always the crew that stayed until the very end, danced the hardest and just really went all out. That’s how people in Tbilisi started noticing us, and we eventually became really tight with the whole Tbilisi techno crowd,” Natig recalls of the days when dancing into the early afternoon was not an option in Baku.

The story of iN is one of a persistent uphill battle against a series of setbacks ever since the club first opened in 2015. The club’s first location in central Baku was quickly shut down following noise complaints from neighbors who, unfamiliar with electronic music, accused the club of playing the same track over and over again. During the interim, the club found a “home away from “home” in the Tbilisi club KHIDI, which hosted a number of iN nights featuring Azeri DJs, and the connection between the two clubs remains strong to this day. iN’s second reincarnation at a bigger location also ended in a flop after the iN crew realized they couldn’t afford the exorbitant rent. Another opening attempt ended just after the first party with the club’s suspicious landlord calling in the police to evict his own tenants. Since the beginning, iN has been entirely self-funded—a rare occurrence in a city where most private initiatives depend on government support or funding from the oil industry. 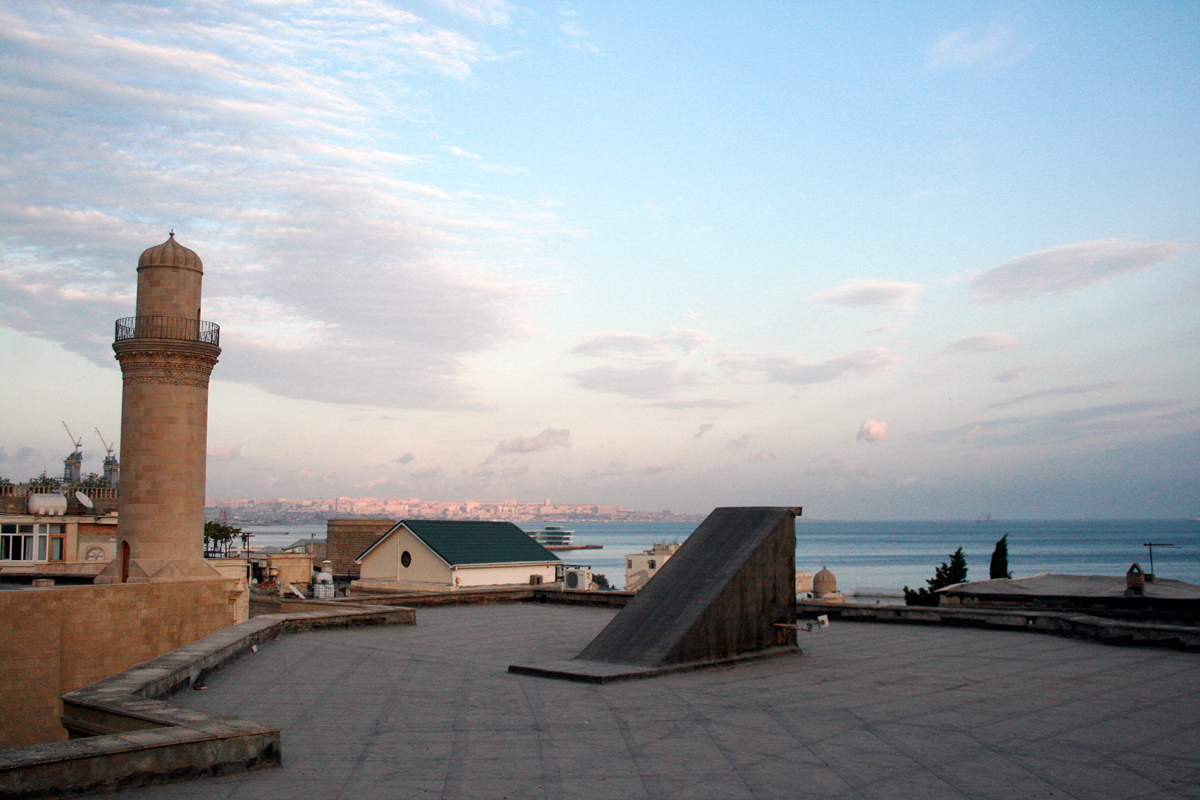 “Honestly, at this point all my friends thought I was completely crazy to carry on with the project in the face of all these financial and administrative roadblocks,” Natig admits with a smile at his favorite coffee shop in central Baku.

After almost three years of floating from place to place, iN settled in a new secluded location that ticked all the boxes: a massive abandoned printing house tucked away between a construction site, high rise apartment buildings and derelict body repair shops in Baku’s nondescript 3rd district. With help from friends and volunteers, the iN team worked around the clock on a very tight budget to turn the ground floor of one of the factory buildings into a space with all the trappings of an industrial techno club. Old pipes and ventilation shafts were taken apart and welded back together to form the club’s labyrinth-like chill zone where people can take a breather in little nooks made out of scrap metal found onsite.

Lacking the money to purchase a high-end sound system from abroad, the club enlisted the help of Dede (“uncle”) Namik—a mustachioed retired Soviet sound technician in his sixties—to install a custom-built sound system. Dede Namik is extremely proud and protective of his creation, keeping watch at every iN event, eager to share stories about how he built Azerbaijan’s first analog delay unit for an electric guitarist friend back in the 1980s. 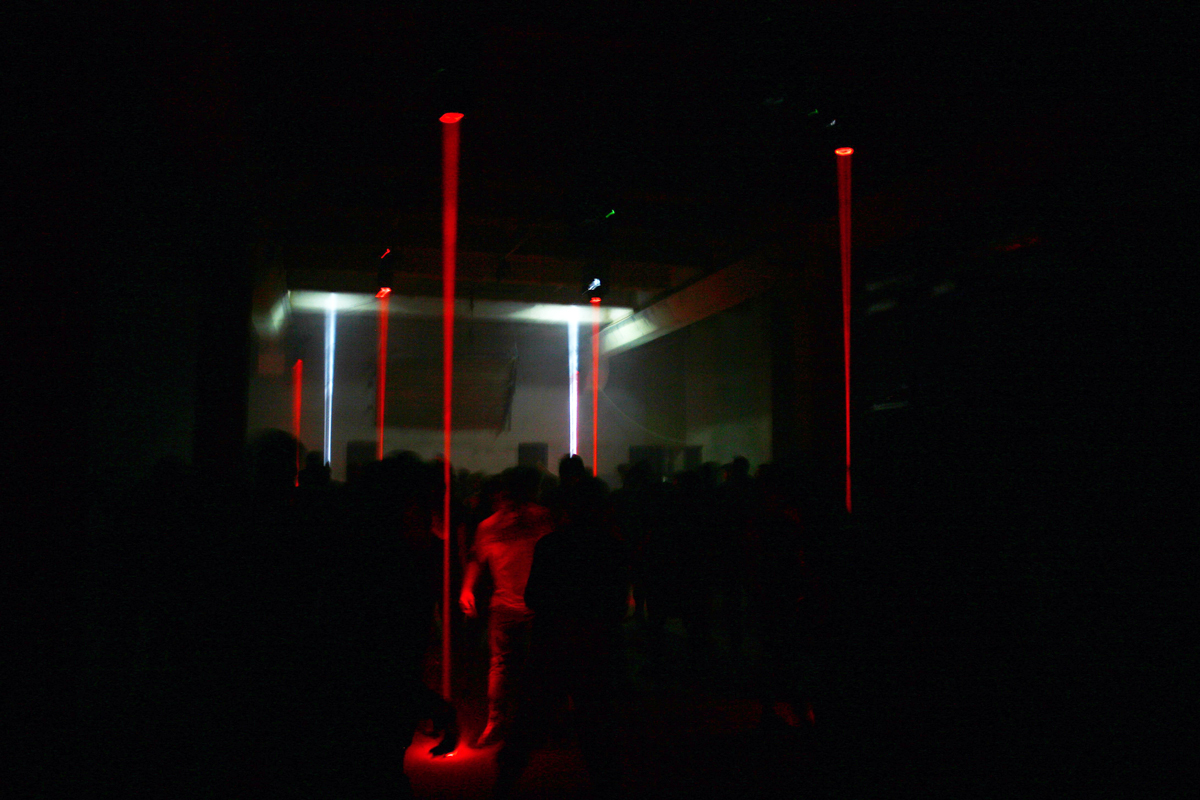 While iN clearly aspires to follow in the footsteps of famous industrial techno spaces in Europe, the club also has a broader social mission that goes beyond offering the full techno clubbing experience to locals. In a country where rave culture is perceived as morally reprehensible by a large proportion of society, particularly among the older generation, the founders of iN are adamant about challenging existing prejudices towards ravers and other expressions of non-conformity.

Growing up in a rough-and-tumble Baku in the late-’90s and early-’00s, Natig recalls how difficult it was to be different as a young adult. “Back in the day, if you walked around Baku with long hair, tattoos or just stood out, people would try to pick a fight with you. Things have thankfully gotten better since then, but we want to make sure new generations won’t have to face this kind of prejudice.” 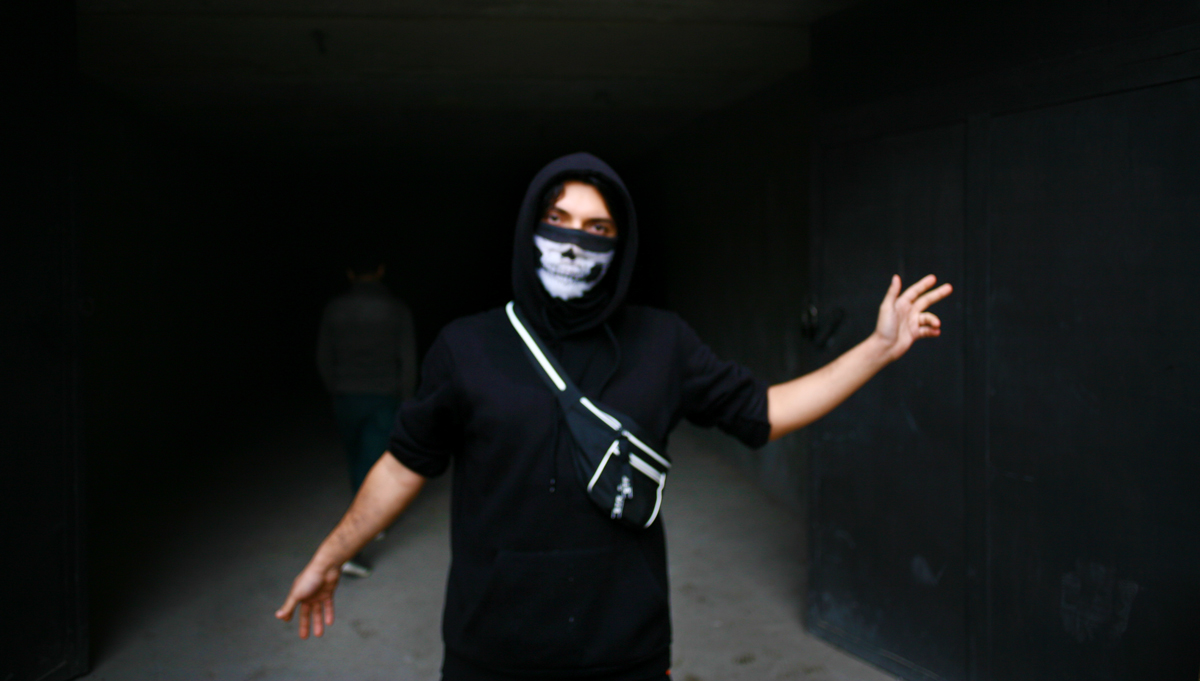 For the club’s regulars, attending raves at iN is more than just about having a good time: it’s an escape from conservative societal norms and an assertion’s of one’s own individuality in city that all too often rewards conformity. Dancing into the morning requires a certain degree of discretion—many club-goers share stories of being shamed by their families for their “raving lifestyle.” To protect the privacy and anonymity of partygoers, iN enforces a strict ban on smartphone use and any kind of photography on the dance floor.

Farid, one of the club’s co-founders, highlights the importance of a creating a safe space with positive energy at the club, particularly for women. “Maintaining a friendly and welcoming environment has always been our number one priority. We don’t tolerate sexual harassment of any kind and that’s why we are extra careful to be very selective with our door policy.” On any given night, hundreds are turned around at the door as part of this attempt to keep potentially aggressive or rowdy people off the premises.

The club’s unique and powerful energy is on full display at a recent party where Irakli, one of Georgia’s most prominent techno DJs and founder of Berlin’s STAUB series, headlines. His fast-paced and futuristic set whips the crowd into a blissful frenzy. Two local acts and iN residents, George Effe and Irshad Hussein, keep the crowd continuously fired up through the early morning hours. Not spoiled by an overabundance of good electronic music, Baku ravers dance with a degree of fervor and abandon that is often difficult to find in European cities with well-established clubbing scenes.

“This place is sacred for me and I think what iN is trying to accomplish here is so important for this city,” Elvin, an experienced Baku raver, says about iN transforming Baku’s cultural landscape. 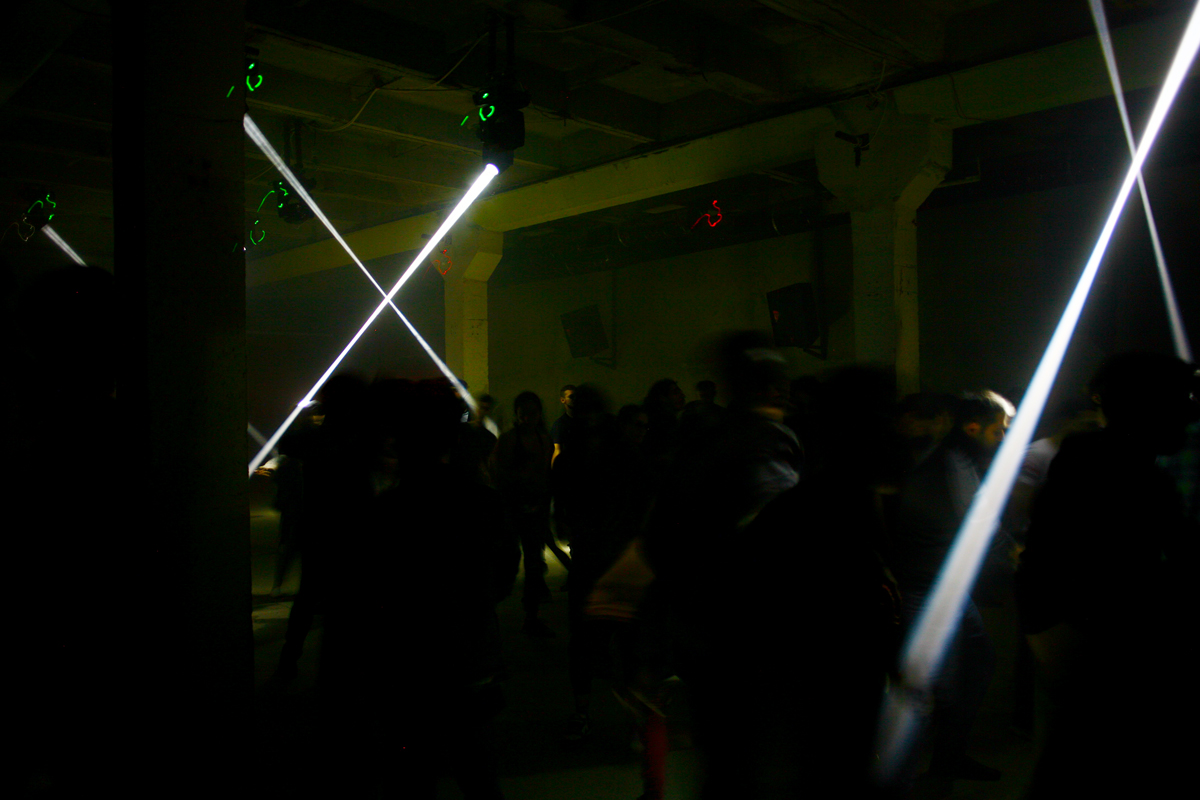 As the party winds down late on Sunday morning, small groups of people dressed predominantly in black quietly make their way out of iN’s cavernous entrance into the club’s inner courtyard. Walking past several body repair shops that separate the club from the motorway, ravers pass a group of older men sipping tea around a makeshift table made of scrap metal with sparks flying in the background from someone cutting through old car parts.

“They’re cool with us being here,” Mika, the guy behind the club’s interior design, explains after exchanging a brief “salam” with the club’s working-class neighbors. These friendly interactions give the iN crew hope that their project can bring generations closer together. At the very least, the small grocery shop with an oversized blinking sign across the road from iN is profiting from the club’s opening in what is otherwise a sleepy neighborhood with little foot traffic.

While the situation surrounding iN remains uncertain and precarious, the club’s staff remain cautiously optimistic about the future. “Back in 2015, barely 50 people would come out to our parties and now we’re seeing crowds of 500. For Baku that’s incredible!” Natig says while looking back at the club’s bumpy road to prominence.

Given its unique history and close ties to the Georgian club scene, iN is not only attracting major talent from Berlin and Tbilisi—such as Ben Rau and Kwartz—but also hopes to provide a platform for local talent going forward. While many from the Baku scene have left the city, Natig says he’s planning on staying put.

“At the end of the day, we all love this city. And as corny as it sounds, we really believe we are ultimately making it a better place.” 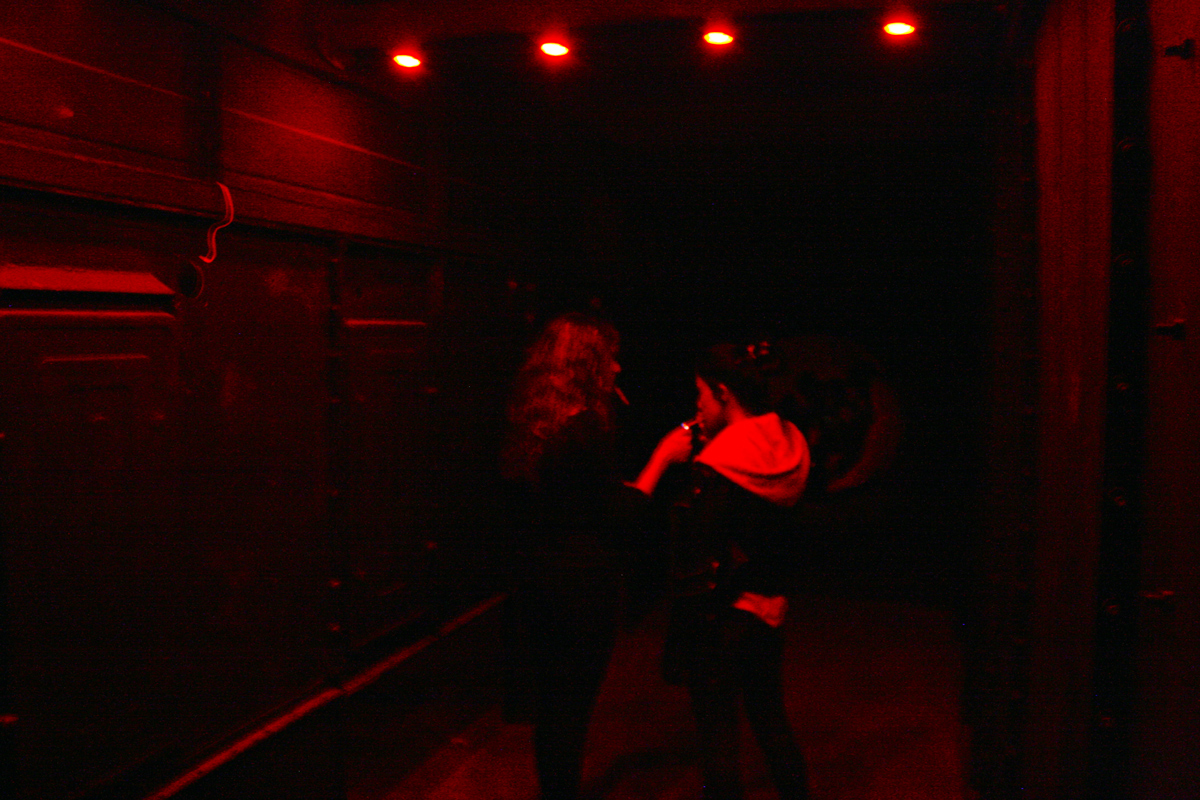