In the late ‘90s, new energies and new people flocked to Berlin. On the ruins of techno, artists used the digital revolution’s inexpensive and widely available tools to once again write “real” songs with lyrics. This style went with dressing in an extravagant, sexy and flamboyant manner; glamour and glitz replaced sweatpants and sneakers, and make-up and elaborate hairstyles made a comeback for women and men alike.

After my exile years in London I was once again ready to party all night in Berlin, so I moved back into my apartment above a brothel on Wildenbruchstraße in Neukölln. White Trash Fast Food, which opened at Hackescher Markt around the turn of the millennium and soon after moved to Torstraße, became the epicenter of the new scene. There, Walter “Wally” Potts and Wolfgang Sinhart combined American hamburger cuisine with punk-y parties, bizarre sex shows and extreme performances. It was the counterpoint to techno’s sterile male DJ culture. And the police came by almost every night.

I met lots of old acquaintances when I went there, so it was like a flashback to the ‘80s in West Berlin. DJ and bar legend Maria Zastrow came roaring into the club on a motorbike with her husband, and rock ‘n’ roll stage hog Ghazi Barakat (AKA Boy From Brazil) was also there. When Wally asked me if I’d like to organize parties at White Trash on Mondays or Tuesdays, I chose Tuesdays. One night I was playing wave and punk rock, and I followed up a Gun Club track with a Peaches song. Suddenly a wiry little woman next to me is shrieking excitedly, “Wow, you played my track! That’s so great! No one does that. That’s exactly how I always wanted my music to be played!” It was the beginning of a beautiful friendship.

Peaches is one of the most important musicians Berlin has ever produced. Her shows were groundbreaking. At her first gigs in the late ’90s she stood on stage with her Groovebox 505, her guitar, hairy armpits, a tanktop and hot pants, screaming obscene and feminist slogans. It was genuine punk rock, completely at odds with current standards of beauty and performing. It was a sensation in Berlin. 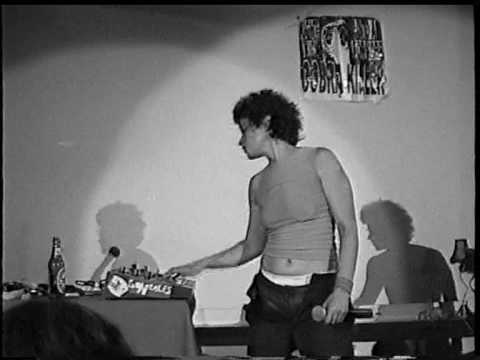 Another central venue important to the movement was Rio, which was run by Conny Opper, with whom Peaches soon started a relationship. The music was New Wave-y, but with a technoid twist. Bands like Glamour To Kill played a mix of New Wave, rock and disco. And then there were people like Namosh with his sexy song and dance performances. Those were like live stage orgasms.

Suddenly things like that were happening all over Berlin. I thought, “Wow, it’s blowing up again. It’s high time for a compilation or a big event to bring all those people onto one stage.” And that’s how Berlin Insane was created in 2003, featuring Alexander Hacke of Einstürzenden Neubauten, Namosh, Bettina Köster, Mocky, Peaches, Gonzales, Taylor Savvy, and many others. It tied together the old and new Berlin.

Wally and Wolfgang from White Trash were very enthusiastic, as well as Love Parade founder Danielle de Picciotto and Alex Hacke, whose queer burlesque events at West Berlin’s Big Eden were as influential as East Berlin’s White Trash, so we had two clubs for the debut of Berlin Insane. Rosita Kürbis, who had managed the Love Parade with Dr. Motte, took on the job of acquiring sponsors, which was not an easy task since sponsors were fixated on techno events. Nobody wanted to openly support something that new and utterly insane. Even from the artists we got an equal amount of negative and positive reactions because the scene was pretty set in its ways, punk rockers as much as technoheads. But I had saved some money and wouldn’t let it discourage me. I hired two interns and got cracking, DJing during the night and organizing Berlin Insane during the day. I was in my element.

There was, of course, the issue of transporting our guests from White Trash on Torstraße to Big Eden on Kurfürstendamm, which were several miles apart. We negotiated with the Berlin Transport Authorities for buses. I ended up paying off those costs for one or two years, but I didn’t mind because I knew it had to happen. Rosita managed to get an energy drink and a whiskey company as sponsors. The energy guys gave us piles of their drinks and the whiskey guys gave us 15 cases of whiskey, plus a double decker bus so that we could at least save the rent for one of the BVG buses. We mixed the energy drink with whiskey in big containers and served it for free on the bus. It had quite an effect. One container per ride, then we had to refill.

There was no sound system on the bus, so Alexander Hacke gave a continuous performance, and he was really into it. The clubs were as crowded as the buses until 11 in the morning. Electronic music mixed with New Wave, experimental sounds, punk rock and rock ‘n’ roll—it was back! After the party, the whiskey bus’s central folding doors were unhinged and the furniture was half-ruined. Needless to say, Rosita totally freaked because it would have cost us a fortune to replace. In the end it turned out that the whiskey company had failed to mail the sponsoring contract, which saved our asses.

Two days after the event we all met at White Trash. Everybody thought it was a big hit and wanted to do it again. People still raved about Berlin Insane months later. We issued a call for bands to send us their music, and within four months we got around 600 CDs. I had boxes full of CDs in the back seat of my car and listed to them one by one while driving. Under the passenger seat I had a “good” and “crap” box. The good stuff was enough for a double CD.

There was hardly any press coverage of the first Berlin Insane, but for the second one in 2004 all we had to do was call to get articles in all the newspapers. We made the cover story of Berlin’s city magazine, Zitty, titled “Punk’s Not Dead.” Even public TV covered us. The event was bursting at the seams. This time we spread our opulent program over five clubs: Wild at Heart, Rio, Big Eden, Bastard, and White Trash. To kick it off, we took an afternoon boat trip past the Universal Records headquarters and the Bundestag to flip them the bird. Glamour To Kill had plastic machine guns, Namosh had an aviator cap and political rapper Splatterdandy had a baseball bat and a wrestling mask. There was also a screaming mob of people on the boat, right in the heart of the capital. 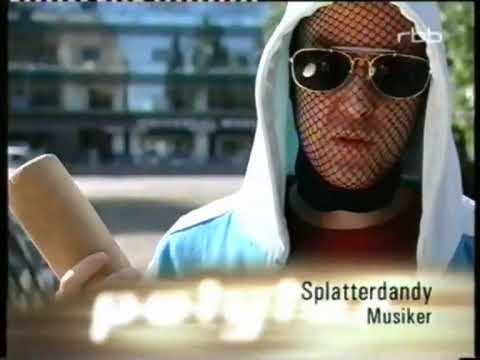 The police showed up to the press conference afterwards. They were shocked to see a boat full of bellowing people with machine guns passing the Parliament building and followed us to shore. They wanted to press charges for breaching the peace and illegal possession of firearms and intended to book me right away, but I had to go to sound check. I showed them the guns were only plastic dummies, but apparently even if you’re unarmed you’re not allowed to go to the Bundestag and serenade the politicians. Somehow I convinced them to let me go anyway, and with support from the press, we got off lightly in court. Nevertheless, the whole thing completely ruined me financially.

During the fourth or fifth Berlin Insane at Volksbühne, we played the whole house with about 40 artists from all kinds of genres in one night. It brought in a little money thanks to a couple of bigger sponsors, which was enough to bankroll the namesake CD compilation Berlin Insane. After these accomplishments I felt it was time for me to turn to other projects.

People often ask me if there will ever be another Berlin Insane. By now so many bands have made their interest known that I’ve got half a mind to do it, as soon as my album is finished. Countless bands in the basements of this city perfectly represent just the kind of anarchist spirit we once turned against the establishment. Yes, there might be a sequel to Berlin Insane. The spirit remains unbroken.