It’s a bold statement in more ways than one, but put me on the record: if Anti-Pop would have an heir apparent, it would have to be Death Grips. At least I’d like to think about it like that. The first track I heard off their new album was actually “Lost Boys” on a YouTube video of them practicing the song, shot from the floor behind the drums and with Zach Hill’s footwork the focus. The loud, hard, live drumming and aggressive production fits perfectly into the hip-hop template—or should I say created a new one? 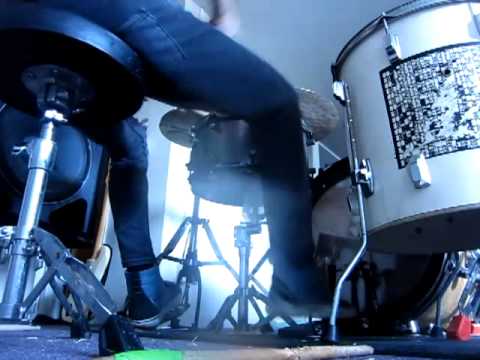 Death Grips, both in terms of MCing and rhythm, have infused hip-hop with a punk aesthetic. In a way it makes sense considering Zach Hill’s background as a punk drummer and a former member of Boredoms. Nevertheless, so many rock and hip-hop fusions have failed miserably in the past. The same goes for jazz and hip-hop. And nine times out of ten it has to do with a lack of respect and understanding brought to the table by both parties. In contrast, Death Grips exhibit a total mastery of both. You see, a lot of people think hip-hop should sound a certain way and be about certain things.

I think that’s a backwards way of thinking. For example, with Death Grips, you can’t understand the lyrics, which is pretty uncommon for hip-hop. But that just adds to an overall aesthetic of aggression, through which you can still gleam some kind of message. Take the album’s title, The Money Store. If you didn’t grow up in America, you might not know that it’s a reference to a consumer finance company that specializes in sub-prime mortgages. Basically, these are legitimized loan sharks. I don’t want to speculate too much, but I have a feeling the anger on the album is vented in that general direction.

In that sense, they’re rawness feels almost like, say, Public Enemy— like It Takes a Nation of Million to Hold Us Back. Death Grips is Shocklee and Bomb Squad raw, production-wise, and they also have something of the dichotomy between Chuck and Flav, that tension in the middle of a cacophony, which explodes into something hard hitting, dirty, unpristine, and aggressive. There’s nothing pussy about it. And there’s nothing pussy about Death Grips. ~