In Zora Jones’ digital portraits of herself, she always has four arms. During her live audiovisual show with creative partner Sinjin Hawke, which the pair toured at Unsound Krakow, Mutek Montreal, and across Asia, the Austrian producer tampered with her video camera to project multiple, synchronized versions of herself choreographing movements while activating synth leads in real time. Against a stark black backdrop, the silvery figures looked like four extras from a Hype Williams music video recast to perform the Saman (Indonesian thousand arms dance).

Jones’ debut album Ten Billion Angels, released earlier this month, expands on her fixation with self-plurality. The work comes with an interactive visual component on the Fractal Fantasy website. Within it, a number of quad-appendaged bodies fill the screen, bound up in iridescent purple tentacles. In this sense, how Jones sees herself corresponds to the many roles she’s meticulously trained over the years: Zora the fashion designer, Zora the producer, Zora the DJ, Zora the graphics creator—all four of which come together as Zora the artist.

Though Ten Billion Angels is Jones’ first album, she’s had her hands in a number of projects as the titular co-head, or “fairy squadmother,” of her record label Fractal Fantasy. She helped found the interdisciplinary imprint in 2014 with Hawke, who is known most prominently for his work with Kanye West. Since, she’s collaborated with footwork vanguard Jlin and released the collaborative album Vicious Circles alongside Hawke on Planet Mu. That being said, Jones’ trajectory as an artist is best traced all the way back to her first Fractal Fantasy EP 100 Ladies, released in 2015 and consisting of seven tracks carefully plucked out of 100 demos that Hawke challenged her to make two years earlier.

“For me, when I started making music to when I first released, it kind of looks like a triangle. You’d start with this really broad sound, and then, over time, it narrows and narrows and narrows and it becomes that’s you, and your sound, and your identity,” Jones tells me over Zoom. She calls me from Montreal, where she’s been settling in during COVID-19 after a peripatetic two years. The black shadows from the blinds in the background slash across her form, giving our conversation a film noir feel. On the screen, she sits wearing a pair of Sennheiser headphones and a white track jacket with a black tag “Fractal Fantasy” over the right chest. Her trademark long ponytail is wrapped into a high bun. “I remember when I started out making music, I did so many things that I now know you’re not supposed to do,” she continues, “Like putting compressors in the wrong place, and I figured out a lot of new techniques just by experimenting and breaking the rules. And when you’re better at making music or art, you’re more able to execute exactly that and maybe experiment a bit less.”

A lack of experimentation is Jones’ least probable fault. She’s the kind of no-holds-barred iconoclast who once launched Gucci Mane adlibs into outer space for Sónar’s GJ273b project in an attempt to communicate with alien life forms. Her signature sound, which wraps the high-octane brio of metallic whirrs, flutes, and synth blares around mutant bass, is always folding in new elements. Hawke describes her take on club music as emanating with “this beautiful, almost extraterrestrial energy.” On Ten Billion Angels, her new additions include layered, trilling acapellas made from her own vocal recordings that give her productions a more full-bodied, ecclesial feel.

What Jones admires the most about this titillating CGI subculture is the tenacity and single-mindedness these fans demonstrate in bringing their augmented avatars out of their imaginations and into cyber reality. “They need to actually see it,” she says, “And that’s such a cool, and kind of pure, artistic motivation—that you want to see something or hear something so badly that you need to make it, and that’s all you care about. [These modders] don’t care about getting famous or getting money from these things. They just do it purely for the passion of needing to see these things and needing to make them.”

In her album’s motivational statement and within our interview, Jones’ expresses her dismay over social media’s “absolutely evil” tendencies of clout chasing, empty hype, and attention hijacking—an online economy entirely dedicated to the exact things Jones herself avoids when she commits herself to another multifarious undertaking. To wit, her earnest admiration of online modding communities is a testament to the very qualities she herself strives towards. Hawke, who has known Jones for over ten years since their fateful meeting at the club Razzmatazz in Barcelona, attributes her tireless work ethic to her upbringing on a horse riding stable, where she juggled training, competing, caring for animals, and teaching equestrian skills—honing the multi-tasking expertise she now uses to co-run her polymathic label. “In the last 10 years there’s been an exponential swell in the amount of music being released, coupled with an exponential decrease in it’s overall quality and value—so I think it’s important that we recognize exceptional craftsmanship and artistry when it happens,” he writes to me over email from Montreal, “Zora’s been working at her craft as long as I’ve known her, and she really put in the effort on all aspects of this record: artwork, visuals, vocals, composition, mixdowns, masters, sequencing…There’s no ‘machine’ behind her, yet she was still able to nail everything.”

The farm where Jones grew up is located in the south of Austria, in Klagenfurt am Wörthersee, a city on the eastern shore of a popular bathing lake. She credits her birth country for instilling within her an appreciation for culture and her mother, an educational science professor who was “super instrumental in the beginnings of Austrian feminism,” for always encouraging her to follow through on her artistic interests. Her father, meanwhile, was an actor and also involved in music. Jones remembers sitting on his lap at five years old as the two of them made beats on his Atari computer using an early version of Logic only compatible with floppy disks. Her parents helped cultivate her early curiosity for the arts, enrolling her in music classes and embarking on museum trips, and, growing up, she remembers always “drawing and looking and listening.” Even from childhood, Jones remembers her perfectionistic tendencies. 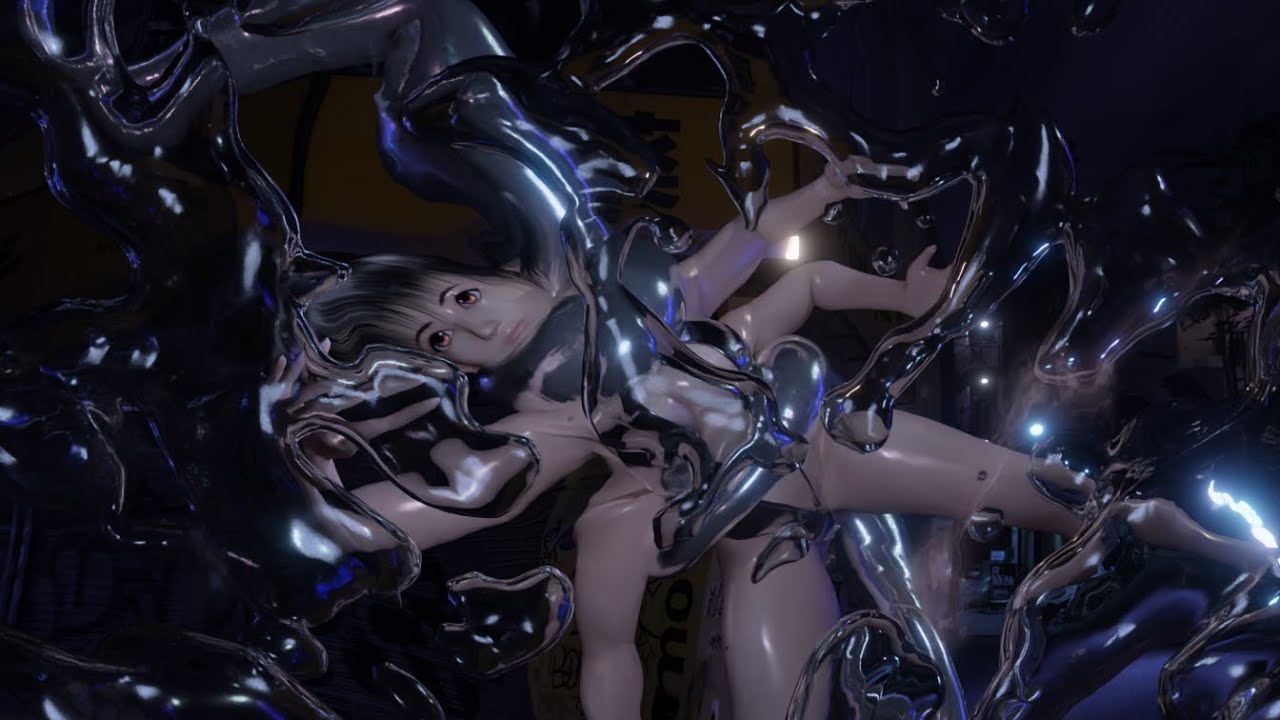 As she succinctly puts it herself, “l know what I want, and it needs to be done.” At ten years old, Jones recalls painting a picture of her favorite violinist, the British-Thai entertainer Vanessa Mae, and botching the shape of her eye. “I cried for like two hours,” she laughs in bemusement, “It was absolutely traumatic, which was ridiculous, but I had to redo the whole painting.” When she was 18, Jones enrolled as a fashion major at BAU School of Design Barcelona, and, in ways, designing garments trained her fastidious attention to detail even more. “Because you have to make everything physically, there are also so many more tests,” she explains. Case in point, she recently spent five hours sewing a new Fractal Fantasy jacket that she had designed in a 3D pattern-making program, only to realize she had made a minor mistake and the zipper wouldn’t interlock. “I wished I could Control + Z it,” Jones jokes, as we then speculated why she chose to develop her musical acumen. Around 2013, the natural autodidact had already taught herself to DJ and to make rudimentary edits, but Ableton, as it so happened, was the quintessential creative tool that enabled her to undo, redo, and piece together disparate variables in seemingly infinitesimal combinations, appealing to both her outsized imagination and exacting standards.

Holding herself to such stringent, entirely self-imposed criteria means Jones personally wills every one of her releases on Fractal Fantasy to become nothing less than an audiovisual tour de force. Upholding excellence seems like a Herculean task, but it’s one Jones staunchly commits herself to. For the presentation Virtua, hosted on the Fractal Fantasy website, the user oscillates around in a empty, 3D-modelled club, surrounded by morphing visual wall panels, to tracks by Hawke, Martyn Bootyspoon (who we recently covered in this feature), Swiss producer Xzavier Stone, and Jones herself blasting on the sound system. Point Clouds, another interactive program coded by contemporary artist Ezra Miller, sees Jones dancing as a dissolving magenta figurine whose expansion, wave frequency, and sharpness can be modulated in real time on a pop-up control window. For every endeavour, “I want it to be great—not only for myself,” she admits. “I don’t want to be a disappointment to people. I want to inspire others, so I think, in that sense, it’s really important to me that what I do is as good as it can be, because I want other people to feel great when they look at it, or feel excited, motivated—everything.”

Two years ago, during an off weekend, Jones was walking around Beijing’s Chaoyang District with her friends when she came across a gargantuan, glowing LED sign emblazoned with the words “Ten Billion Angels Spa.” “Wow, that must be the most amazing experience ever,” she thought to herself. Long after she left East Asia, Jones was attempting to name her new album when, suddenly, the indelible brilliance of “Ten Billion Angels” illuminated her psyche once more. The name was a perfect reflection of the emotions she felt listening to her own work. On the first track, “Shadows To the Light,” Fractal Fantasy visitors careen through a nexus of four-limbed women bobbing and back-bending across a viscous, white expansion. Celestial video game blips and reverberating hums of sub bass ricochet together in the background. What users experience here must be something adjacent to what Jones felt staring up at the spa lights—revelling in a moment of quiet awe while bearing witness to something that promises to be, at once, so sensuous, otherworldly, and immaculate.