Technology has always had a fraught relationship with humans. From the invention of the phonograph by Thomas Edison in 1877 to the Pioneer CDJs introduced in 1994, every new apparatus, it seems, is often met with a suspicious side-eye from older generations. These traditionalists, or Luddites even, regard every advancement as the impetus for a deteriorating society. Those who do take these technologies in stride, namely the younger generations, are then ridiculed for their swift adaptability. Dissenters in the past claimed that the phonograph would kill live performance and that the CDJs would kill the ever-exulted art of vinyl mixing. Now, the debate posits that smartphones and their biggest proponents, the attention-deficient and hyper-connected Generation Z, will surely kill the album format with their preference for Pandora radio, Spotify playlists, and one-track TikTok videos.

Music consumption is only one fraction of the distraught Generation Z conversation; the other half is social media. In the hand-wringing Atlantic article by social psychologist Jean M. Twenge, titled “Have Smartphones Destroyed a Generation?” she lays out the troubling statistics: today’s high school seniors are less likely to spend time out of the house without their parents than eighth graders in 2009. Compared to 85% of Gen X and Baby Boomers, only 56% of today’s seniors go out on dates. And between 2000 and 2015, the amount of time teenagers spend with their friend has fallen by 40%. Whereas teen pregnancy and risk-taking behavior was once a hot button topic in the early-80s; what’s concerning parents now is the sheer lack of rebellion. Instead of flirting with one another at the local mall, these digital natives congregate around virtual watering holes, lurking the continuous scroll of YouTube comments and Instagram memes.

But the strained dynamic between younger and older has existed as far back as 4th Century BC, when Aristotle penned in his ancient Greek treatise Rhetoric. He wrote: “[Young people] are high-minded because they have not yet been humbled by life, nor have they experienced the force of circumstances. They think they know everything, and are always quite sure about it.” Within a contemporary context, these adverse reactions to Gen Z’s online habits may be another case of ageist and parochial finger-pointing.

Looking back in time, Millennials, a similarly despised and “entitled” demographic, were also accused of being “phone-addicted,” only to be disproved by a 2016 Nielson Report in which Gen Xers proved to be the heaviest social media users. Teenaged Gen Xers, meanwhile, grew up on a diet of Friends on cable television and VCR tapes, presumably also breeding a cohort of screen-obsessed zombies in their own right—the public, in fact, deemed them listless “slackers.” It seems that pessimism over advancing technology and the younger generations is the one thing all the preceding generations have in common. What’s also clear is that smartphones and the concomitant rise of social media, as with every new tool and its various applications that have been invented throughout history, comes with equally staggering pros and cons, and a crowd of older, critical spectators determined to focus on the latter.

For example, issues such as social isolation and cyberbullying from the first social networking platforms like chat rooms, forums, and Myspace, have all carried over to Instagram, Snapchat, and TikTok. Discussions about its shared merits have not.

“I realized that most of my relationships in my life, except for my parents, have formed as a result of online spaces,” said Louisahhh, a DJ whose fervent approach to techno and collaborations with Brodinski need no introduction. We chatted outside her Boiler Room gig in Berlin last July. She told me that the best example of how technology helped her forge a meaningful network is from her early-aughts Hollerboard days. 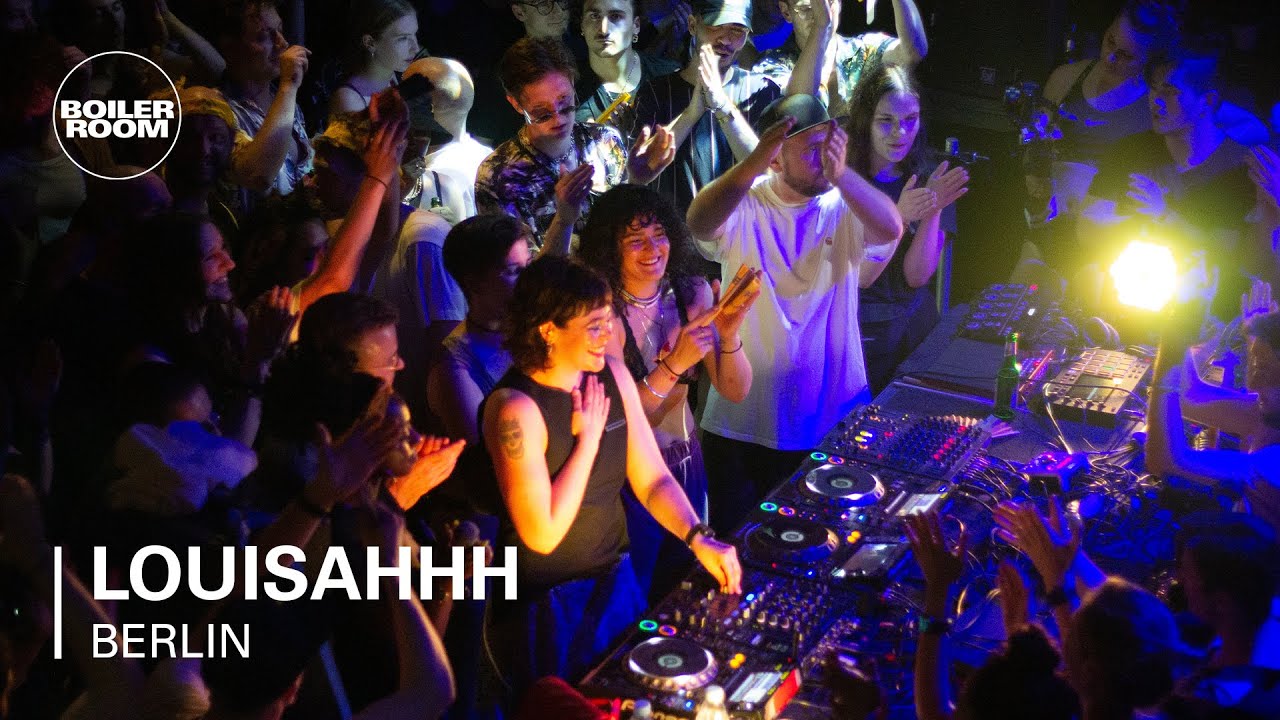 Hollerboard, founded by Joey “Dirty South Joe” Massarueh of Philadelphia music crew Hollertronix, was a forum frequented by a “Myspace-era community of DJs,” as Louisahhh puts it. Its mostly East Coast congregation would go on to become the all-star cast of electronic dance music: Diplo, A-Trak, Nick Catchdubs, Flosstradamus, and DJ Sliink. After entering rehab for substance abuse in 2006, Louisahhh recalls listening to a stack of burned CDs, mailed to her by these Internet friends. Among them, was a demo of Justice’s debut album Cross. “Now sitting in a room with all these dudes who are my peers, remembering about how we used to exchange music off these forums,” she says, “I thought, ‘Fuck, what a weird world this is.’”

In Louisahh’s case, as with many others, advancements in technology are grounded in a far more compassionate reality. Many of the friendships she made in recovery are now long-distance and reconvene in Facebook groups. “We really take care of each other, and that’s mostly through digital means,” she says. “It’s a cool constellation of how to maintain relationships and an amazing way to be helped in the world.” Rather than the dystopian future of an increasingly fragmented society, these mediums are channels towards interpersonal expansion.

The former Director of MIT’s Comparative Media Studies Program, Henry Jenkins, noted this distinction in a prescient 2006 interview: “Right now, MySpace and the other social network tools are being read as threats to the civic order, as encouraging antisocial behaviors,” he said. “But we can easily turn this around and see them as the training ground for future citizens and political leaders. Young people are assuming public roles at earlier and earlier ages. They are interacting with larger communities of their peers and beginning to develop their own styles of leadership.” Over a decade later, long after the decline of MySpace, this observation still holds true in examples like 16-year-old climate activist Greta Thunberg and 18-year-old singer Billie Eilish, whose public appeal is in part to due to her radical candor on such issues as gender politics, body dysmorphia and mental health.

In the latest Electronic Beats podcast, Eilish advocated for an outspoken approach to social media. “It’s a big social responsibility we all should be taking seriously,” she said. “I think, most people that have some sort of following or eyes on them, any sort of people watching them. They have all been pretty good about talking about it in the right ways and trying to get a message out.”

Eilish, a de facto spokesperson for her generation, also honed in on its core values of ethical consumption and identity authenticity in the interview, saying, “I wish people used less plastic. I wish people took global warming more seriously. I wish people stopped eating animals… [I wish that] the culture would be anti-gender. There’s a million things [about the world that] I’d love to change.”

At a time when the media proclaims a fast-approaching Brave New World, wherein catatonic and couch-bound Gen Zers prowl through Instagram for their next dopamine hit, perhaps it’s best to assume that the kids are alright. Maybe they aren’t destined to idly scroll and swipe in perpetuity—but, even if they are, that the savviest of them are wielding their growing purchasing power to enact global change at unprecedented levels, and mobilizing their extensive peer group to do the same.

What has become clear through research conducted in 2019 by Forbes and McKinsey is that, like Eilish, Gen Zers expect forthright political advocacy from both individuals in their peer group, as well as the footwear companies from which they buy. The McKinsey report cited that “nine in ten Generation Z consumers believe companies have a responsibility to address environmental and social issues.” Many of them also consider themselves as activists. Yes, “woke” consumerism is nothing new—it was initially started by Millennials, who have seemingly passed the torch to the subsequent generation. But the Gen Z contingent hold even more sway over global changes. By this year, the report writes, they’re expected to make up 40% of international consumers. As a result, companies are scrambling to boost sustainability of their products and inject diversity into their advertising strategies to appeal to these younger demographics. Now, more than ever before, topics such as representation, feminism, #BlackLivesMatter, gay rights, climate change, inclusivity, and body positivity are becoming as transparent in corporate doctrines as capitalism itself.

These statistics and visible, wide-spread changes across global industries makes a case for optimism. With every smartphone horror story, there is also often a humanity story. If Gen-Zers wanted to live vicariously through a screen forever and eliminate face-to-face communication, then it’s hard to explain the talismanic rhetoric from Greta Thunberg on climate activism and Maryland’s Parkland teens on gun control—both campaigning against very tangible, real life problems. Having grown up in the digital era, Gen Z are also much more agile at filtering through the flood of online content to focus on the information that is most relevant to them. The internet has become a veritable university for these autodidacts where they deep dive into anything from sustainability to sneakerhead culture to intersectional feminist theory. In this debate about the younger, clueless generation and their smartphone addictions, it’s best to reject dated claims and approach the argument with more nuance. One’s online and offline selves can actually flow in symbiosis; in that, these URL interactions exist to seek solutions for global IRL issues.

As coronavirus forces everyone indoors, people across all generations are finding that the only portal to meaningful social interactions is through their retina displays. Across the globe, we’re all, in a way, screen and social media addicts. And the most privileged among us are still able to teach remotely in virtual classrooms, develop new software, advise clients on legal proceedings, raise money for charity, and write feature-length articles. Technology keeps us bound together, whereby phones and computers can either be viewed as a digital prison or a sleek conduit towards a self-actualized future.