You’ll be hard pressed to find anything representative of “ordinary” DJ culture at the Berlin bar and club Liquid Sky. The venue, which Ingmar Koch—one half of the legendary Cologne outfit Air Liquide—co-created in 2017, has no turntables or CDJs. Instead, it shuns conservatism in club culture and opens its doors to anything unusual, and live, improvised music is welcomed. Past performers have used all kinds of unconventional equipment: shortwave radios, old Gameboys, custom-made synth modules and hacked home fitness trainers.

Koch has been interested in “controlled and uncontrolled chaos,” as he puts it, since he started making electronic music in the early ‘90s. This mindset also informed Liquid Sky Cologne, the predecessor to his current incarnation of Liquid Sky, which he ran between 1996 and 2006.

According to Koch, a pair of turntables or CDJs don’t provide the amount of chaotic energy and unpredictability that he and his comrades at the Liquid Sky collective are after. But the thought of a club space devoid of classic DJ gear still seems to be radical and daring for a lot of people. We contacted Koch to get a better understanding of why someone would create a space like this. 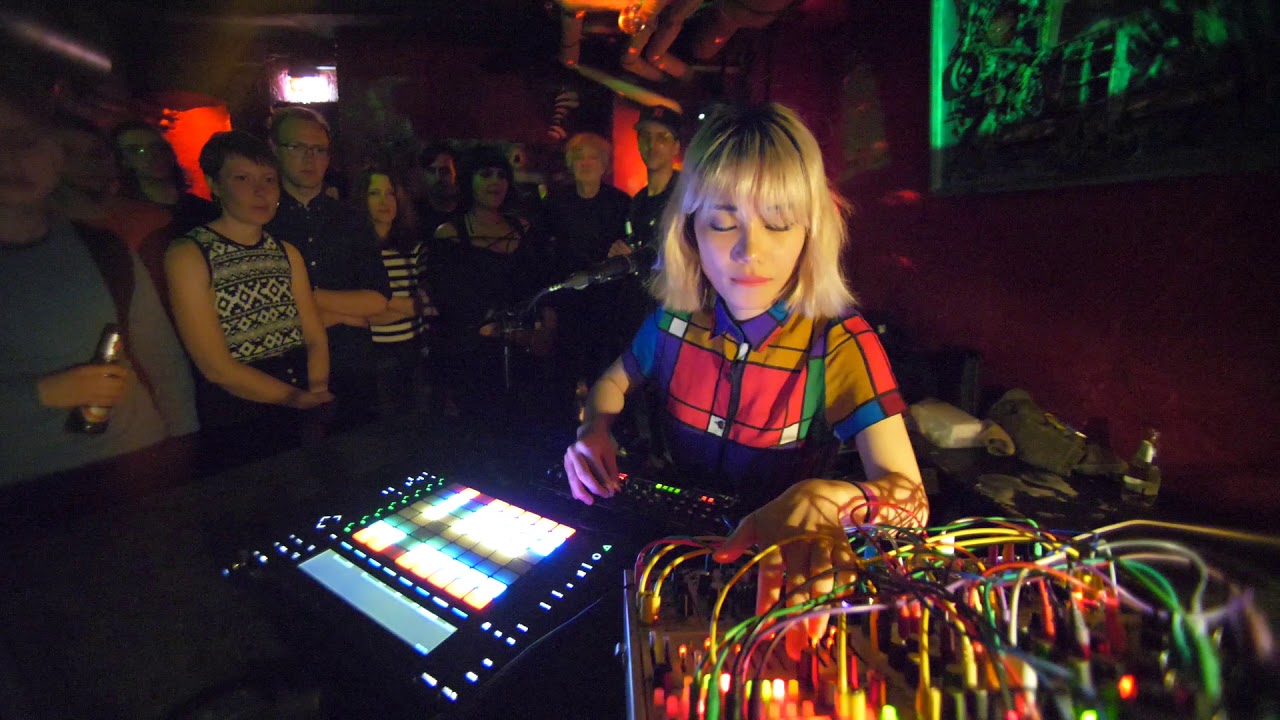 Why does Liquid Sky not have CDJs and turntables?
I think there are nearly 400 bars and clubs in Berlin where electronic music is played on turntables and CD players. Liquid Sky Berlin was and is not intended to be the 401st place where that happens. I have a lot of friends who experiment with shortwave radio. I also have a great affinity for Holger Czukay. He is one of the reasons why I started producing experimental electronic music in the early ‘90s. I loved his shortwave radio orgies back then. That’s why it has always been clear to me that if it has to be a DJ, then let’s go beyond the tried and tested set-up and make it a shortwave radio DJ, a dictaphone DJ or a cassette DJ.

What are the origins of Liquid Sky?
Liquid Sky was originally founded in 1986 in Sao Paulo, by Claudia Ray and Carlos Soul Slinger, in response to the eponymous film. The two saw the film and then founded a fashion and music label of the same name. Then they went to New York and opened a clothing store. At the beginning of the ‘90’s, Liquid Sky was one of the big American fashion labels.

I met Carlos and Claudia in 1992. At the time I still lived in Cologne. I made music and released records in all sorts of constellations and under many different project names. Air Liquide with Cem Oral is certainly my best-known project. When I met Carlos and Claudia for the first time, it was as if we had known each other for years. We have very similar interests and preferences—for ambient and noise and environmental protection, for instance.

You eventually opened a Liquid Sky offshoot in Cologne, right?
Actually, we initially wanted to open a clothing store in Cologne, but we couldn’t find a suitable place. Instead, we suddenly found ourselves in a rundown Persian disco. We thought, “Great, we’re much better at drinking, anyway.” So we opened a bar and filled what could have been a dance floor with couches, so nobody could actually dance. Instead we said: “Sit down and listen to techno!”

I co-founded the Delirium record store. I left the store just before it was renamed Kompakt to do Liquid Sky Cologne. Of course, we were still in contact, and the whole Kompakt crew hung out with us constantly—as well as Blur, Coldcut and Public Enemy when they were in town. Since we already had modest international success with Air Liquide, we knew all kinds of people.

One of the important elements of Liquid Sky was—and still is—to question existing norms. For instance, back in Cologne we used to invite the wives and girlfriends of well-known DJs to play while the men, or the “stars” if you will, were tending the bar with us. We already had regular female-only nights back then, too.

Did the Liquid Sky in Cologne have the same kind of attitude towards performance and DJing as the current one in Berlin?
Pretty much. The path we follow at Liquid Sky Berlin—that we are interested in everything beyond the classic DJ setup—is not new. We’ve been organizing parties without DJs since 1994. There were also a lot of well-known people playing, like Holger Czukay, Michael Rother, Casper Pound, Luke Vibert, et cetera. We have always mixed different styles.

Our booking philosophy was pretty simple: anyone who wanted to, and who we liked, was allowed to play, whether they were a rocker or a techno head. We even once had a psychedelic country band that took over the rave floor for half an hour one night. People totally freaked out, but there was no embarrassing situation or anything like that. Everyone was laughing and partying. The motto was and is: let’s see what comes out.

Expect the unexpected?
That’s the advantage of completely improvising: you don’t ever know what’s going to happen. Then it stays exciting for all the musicians. If I know in advance exactly what will happen, I don’t even need to play. Then I can just put on a tape right away.

What did you think about that short piece we posted about Liquid Sky Berlin and its policy regarding the “traditional” DJ set-up?
Funnily, there are also a lot of “real” DJs who still play vinyl in the Liquid Sky Berlin environment. Personally, I don’t even have a single record or a CD anymore. And I won’t ever have any again in this life. I specialize in other things that are more important to me. I don’t feel like carrying records or bulky equipment around anymore. I prefer to work on large sculptures and films and pictures. Music is a much-loved part of Liquid Sky, but not the only one.

What was interesting is that there actually were people who felt compelled by your short article to threaten me personally. They said they would come over to teach me to respect vinyl DJs. I’ve surely released and sold more records than they’ll ever have in their oh-so-beloved vinyl collection. But whatever.

What kind of music set-ups can usually be seen at Liquid Sky?
Anyone who entertains and makes you think, “Hey, that’s crazy,” is welcome to make music and play live at Liquid Sky. We have our sound system and a 16-channel mixer. Anything else is brought by the respective musicians on the evening. Our place is pretty small. If there are 30 people there, then it’s actually already full. That’s why it doesn’t make any sense to arrive with a ton of equipment like in the past.

iPads, modular synths and all sorts of other small modules and boxes are very popular. Matt Black of Coldcut, who has been a member of the collective with his wife for a few years, is a regular guest. He plays the Ninja Jamm software that he developed himself. The new update comes out later this year. It’s pretty phenomenal.

Do people dance at Liquid Sky?
Dancing is not our emphasis. There are sofas around everywhere. We always say, “Do whatever you want.” People should be able to feel at home on the sofas instead of wanting to leave the room. We don’t charge for admission, and accordingly we don’t pay any fees, which separates the wheat from the chaff. Anyone who plays at our place does so because he or she wants to do. I have never made money as a restaurateur since 1992. Nevertheless, I kept on going, because newcomers and obscure sounds have to find a place and always need to be featured.

We prefer to feature the antiheroes or the old heroes who are in the mood to play weird stuff. Sometimes people come from all over the world to record tracks with us, just so they can later write “live at Liquid Sky Berlin” on the record.

You used to be a serious hardware collector. What happened to all the rare synths and drum machines you used to own?
That’s history. Life is made of ups and downs. One is always punished for courageous acts, and the crazier and wilder the highs, the deeper the lows. That’s why I’ve lost everything a few times in my life and have even been homeless. So all my synths had to be sold at some point, or I lent them and did not get them back. Or they were destroyed by drunken acquaintances. But that’s alright. We’ve all chosen this weird lifestyle, so there’s no need to complain.

I’m missing several years in the ‘90s from my memory, for example. I know we played and released records, but I can’t remember any details. That was a very “polytoxic” time. In the meantime, I’ve been clean for a few years and live in the countryside. I have a remote farm and live there with my dogs. Our garden is directly adjacent to an area with wolves. Sometimes my dogs and the wolves have a howling competition.

I hardly go out anymore, but my interest in controlled and uncontrolled chaos when playing live remains. The misuse of technology for making music is still very exciting. Classical sound engineers always get into a fit when they see and hear what we are doing at Liquid Sky Berlin. But I come from punk and noise and from drunkenly falling off the stage and tumbling backwards into the flight cases of Einstürzende Neubauten, I can’t help it.