Back in 2016, Aaron Choe (a.k.a. Airbear) wrote this publication’s first guide to the rapidly growing underground dance scene in Seoul, where he is based. In the years since, a lot has changed. The local scene has grown and contracted—its most recent contractions the result of a government crackdown on nightclubs following the so-called “Burning Sun” scandal, which was a k-pop idol sex scandal centered around the club of the same name. Though that club was a megaclub in the glitzy Gangnam district, many underground venues were also affected by a blanket crackdown against nightlife. At the same time, Seoul has also since found itself connected to not just the larger regional touring circuit in East Asia, but also the rest of the world.

In many ways, Airbear’s own trajectory has followed that arc. Now well-established in Seoul, he has since started to bring his unique approach to Italo-fueled house to Europe and North America. Curious to see what he’s up to, TEB contributor Elizabeth Claire Herring called him in Korea. 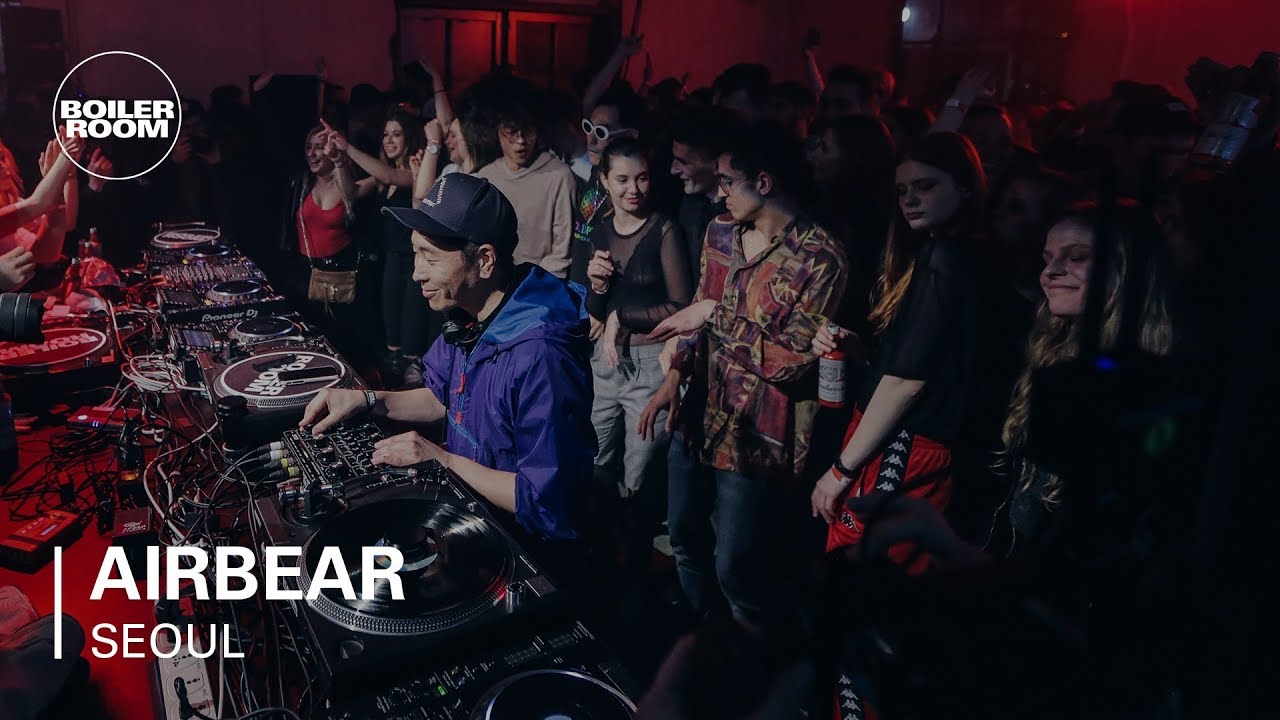 How have you been since your European summer tour?
Good, I came back to Korea and was feeling pretty hopeful about the scene here. I gained a lot of momentum while I was away, but then I came back and everything in Seoul changed.

How so?
The scene started shrinking and the clubs where I would regularly play haven’t been doing well.

What’s going on with the scene in Seoul right now? Do you feel more hopeful now that some time has passed?
Basically, over the summer, a handful of clubs closed (or are in the process of closing) that have all been pretty formative for me.

What are the names of some of these clubs?
Alley Sound and Venue to name a few.

Does this have anything to do with the Burning Sun drama?
Some of it yes, but I think it’s a bunch of issues, since it’s never just one thing that defeats a club.

These clubs are in Itaewon, which a place that I heard people, and especially Korean people, would have avoided 10 years ago. It used to be a rough area where the American military would go to get drunk. It was quite seedy, but then it started gentrifying. You know: Artists move in, then clubs and boutiques and fancy coffee shops. It’s also a halfway point for people from Gangnam. They wouldn’t have to go all the way to Hongdae to go party, which was across town. Instead, they could just go across the river.

But because it was such a central location—and as it happens with gentrification—now bigger companies are starting to move in, and the area where Trunk and Trippy are is going to be redeveloped. It’s some of the best property in Seoul; it has a 360-degree view of the city and it’s on a hill, so I think it’s going to turn into hotels.

Based on talking to you previously, it seems like there aren’t enough people in the underground music scene to keep these places going.
Yeah, and you don’t have a lot of big companies who are into dance music. I still think people in Korea don’t see the economic value of dance music yet. There have been some events that tried to be big—like Mixmag and Faust were throwing events on a large scale—but I’m dubious of brands entering dance music these days.

Why is that?
It feels inauthentic. If they’re throwing cool events, I’ll always support that, but I don’t know if this is what Korea needs right now. I think even EDM festivals are dipping in popularity in Korea.

What do you think Seoul needs to have a sustainable underground dance music scene?
You always need more producers. It’s really hard to make money as an artist in Korea. I know it’s the same around the world, but especially in Korea. Even to be a DJ—the top underground DJs have a hard time living solely off their gigs, so it’s not really a career path a lot of people choose here.

It’s hard to bring international acts and keep things sustainable. Someone who is really popular abroad might come here and struggle to get enough people to show up.

It’s still difficult to figure out, but I guess this is what people go through who promote parties. I was feeling lost about the scene, but then I’ve thrown parties here recently where 100 people showed up, which is a lot for here. I don’t know how big I would want my events to grow, but  it’s more about having friends in town and creating a good vibe. I wonder if you’d have to relocate to Europe to break out on a bigger scale in the DJ scene,.

Do you think this has a lot to do with cultural differences concerning drug use?
It’s something that’s not talked about, but I think it has an effect. The Korean scene is mostly fueled with alcohol. However, there is a music appreciation culture that exists in Korea like there is in Japan. There are listening bars and places to sit and consume music with food. I know this culture is starting to gain popularity in the West too.

I guess the drugs can enhance the music, and the music can enhance the drugs. In Korea, I think people just want to have a good time. At one of our recent parties, we played a mix of music and then at the end of the party, the last DJs went from Kenny Dope to “We Are the Champions” by Queen and it started this big sing-a-long with the crowd. Sometimes, if you play tracks that are weird, and people aren’t accustomed to it, it can be difficult. We spaced out the night so that the middle was more challenging but the end has like a song you can sing along to, so that you go home really happy.

Do you think eventually the scene will develop to be more lighthearted? Perhaps in its own way that doesn’t have to be in the context of European dance music?
I think it would be cool to have a regional sound, but I think Europe is very interested in coming to Korea and hopes to see that same curiosity for Koreans going over to Europe as well.

When do you think the label will be ready to launch?
Everything will start coming out at the beginning of 2020. I have my first two artists, as well as two or three more in mind, in addition to a few dream projects.

And you have already started showcasing Korean music in Europe and America via touring, right?
Oh yeah, either with edits or slipping in Korean songs. But I don’t think that, because I am Korean, I have to play Korean music.

I just want to do my own thing—And I’m big into digging for Korean music. It’s been a way for me to rediscover my own culture. Plus I think it trips people out to hear Korean vocals in the middle of a set, especially a techno set.

The Korean American community in Seoul seems to be nurturing its own music culture. Do you think that this community is growing into something larger as well?
I think it’s always been there. In the ‘80s, Koreans who were either from abroad or went abroad for a bit brought back things that they’d found, like music and fashion. Korean Americans are international Koreans. There are seven million of us around the world, and I feel like we’re unofficial ambassadors for sharing things from Korea. David Chang, Margaret Cho, Steven Yeun, etc. People seeing artists like Yaeji or Hunee get interested in a way into Korean culture. Some of them were born abroad, here or just went abroad recently. It is important to leave Korea and make a mark for yourself, and when you come back, you can be more appreciated I guess.

It also seems less important to live in a place that is the center of the industry, now that everyone is so connected. Living in a removed place isn’t as hard.
It depends on what’s important to you. For me, a solid standard of living is really important. I really like the quality of life in Korea. I have a freelance day job working in film production, I have enough time to make music and I can afford a cheap place. It is kind of like Berlin in that way. What’s nice is that I’ll go to different Asian cities to play a gig for the weekend and come back. For me, Seoul is like Berlin. People move to Berlin, they might not play so much there, but they do it to be centrally located so they can afford to hop around and have cheap rent. So, in that respect, I do like living here. When I feel like it’s right for me to move to Europe, maybe I will.

I tend to get really influenced by other people sometimes in a good and bad way so I just try and lay low and do my own thing.

Definitely, there is no rush! What does your upcoming tour schedule look like?
I just did a few parties with friends coming into town, like Andry from (5AM with Powder and 5ive), Daydreams from Melbourne, and Savile from NYC. I just completed a short trip/tour to the US and played in Brooklyn with Chung from Sublimate and in LA with They/Them DJ, Biana Lexis and Anu.

Also went over to Tokyo, Shanghai and will go back to China to play in Beijing in December. Next year I have plans to do a tour in Australia, and hopefully go back to Europe to play more gigs.

What book are you reading at the moment?
Scored a Kindle from a friend and start Meet Me in the Bathroom.

Any Podcasts?
I like the RA Exchange Podcast. It’s nice hearing about what artists/DJ’s are going through. Their history to where they are now. Also the Smoke Machine mix series from Taiwan.