Berlin-based DJ and producer Tommy Four Seven has been an authoritative voice in the underground techno scene for more than a decade. But the last few years have seen him re-emerge with a powerful new vision, pushing edgy broken beat- and industrial-indebted sounds through his eponymous record label, Numerology party series and various releases. His most recent album, Veer—his second following his 2011 LP Primate on CLR—sees the artist dive deeper into the depths of his twisted musical vision. TEB editor Chloé Lula sat down with him to discuss its concept, design and its underpinnings in his vegan lifestyle.

It’s 5 PM on a Thursday in April when Tommy Four Seven brings me to a small vegan restaurant near Berlin’s Ostkreuz S-Bahn station. A lot of deliberation went into the decision before we left, and his care to the food selection—Vöner, which specializes in non-meat renditions of traditional meat-heavy Turkish dishes, where he had one of his first vegan meals in Berlin 10 years ago—was a clear extension of the attention that he puts into all other aspects of his personal and professional selves. Tommy has historically reinforced strict boundaries between his public persona and his home life. His real name is unpublished and his private interests, which include a devotion to veganism and vegan culture, have been left largely undocumented.

As we drove through the city, Tommy pointed out locations that were important to him and simultaneously explained how he enjoys spending his time outside of the studio: at the tennis courts in Kreuzberg where he trains; at one of his favorite bars near Ostkreuz, which has “black carpet on the walls and a server in fetish clothes who plays The Velvet Underground records”; and at Kaffee Ingwer, the vegan coffee shop that his long-time girlfriend started as an outgrowth of her hugely popular vegan food enterprise The Green Market Berlin, which Tommy helps with during its bi-annual tenure at Mitte’s Alte Münze (ironically, the same location that he has traditionally used for his Numerology events).

Veganism plays a large part in Tommy’s life. His conversion began while he was still a part of Chris Liebing’s CLR, and he subsequently convinced the entire label roster, and his current partner, to make the switch as well. “I was like, 22 or 23 and exploring the internet and stumbling across a lot of things. I finally found this documentary called Forks Over Knives, which I still recommend. And then it all kind of clicked.” Already touring extensively at that early point in his career, Tommy found that he was less prone to feeling rundown or getting sick after switching to eating whole, healthy foods. He added, however, that he ultimately follows his diet for ethical reasons, the health benefits being a bonus. “I think the word ‘vegan’ has gotten a bit confused,” he said. “Many people now see it as some sort of diet trend. But veganism has actually always been the idea that animals shouldn’t be exploited for our pleasure. So this obviously extends beyond just food to all forms of animal exploitation, so for me it’s more of a lifestyle than just a diet.”

As Tommy has become more intimate with the lifestyle surrounding vegan living, his zeitgeist about nature and the environment has also shifted. His newest album, Veer, is a meditation on many of the crises that the world is facing in the wake of environmental crises and existential threats to humanity. “Being vegan, I feel aware of what we eat, and how it affects the planet,” he said. “I think now more and more people are waking up to environmental issues surrounding our food choices, especially as the vegan movement grows and mainstream media covers it.”

Despite expressing optimism about the changing trends in the public’s consumption of plastics, meat and other environmentally-destructive resources, Tommy Four Seven’s music clings to a more fatalistic point of view. The themes invoked in Veer’s imagery and track titles form a futuristic sci-fi narrative where society is forced to adapt to a potentially animal-less, ecologically fragile world. The 10-track album starts with “Dead Ocean”, a reference to global warming and disaster. It’s followed by “The Virus”, “X Threat” and “Colony”. When I asked him what the latter was referencing, he replied that it was about the human race being forced to leave Earth and form a new colony due to a man-made existential threat that had finally hit. In this perverse and resource-depleted climate, “We have to leave because the human race fucked it up.” 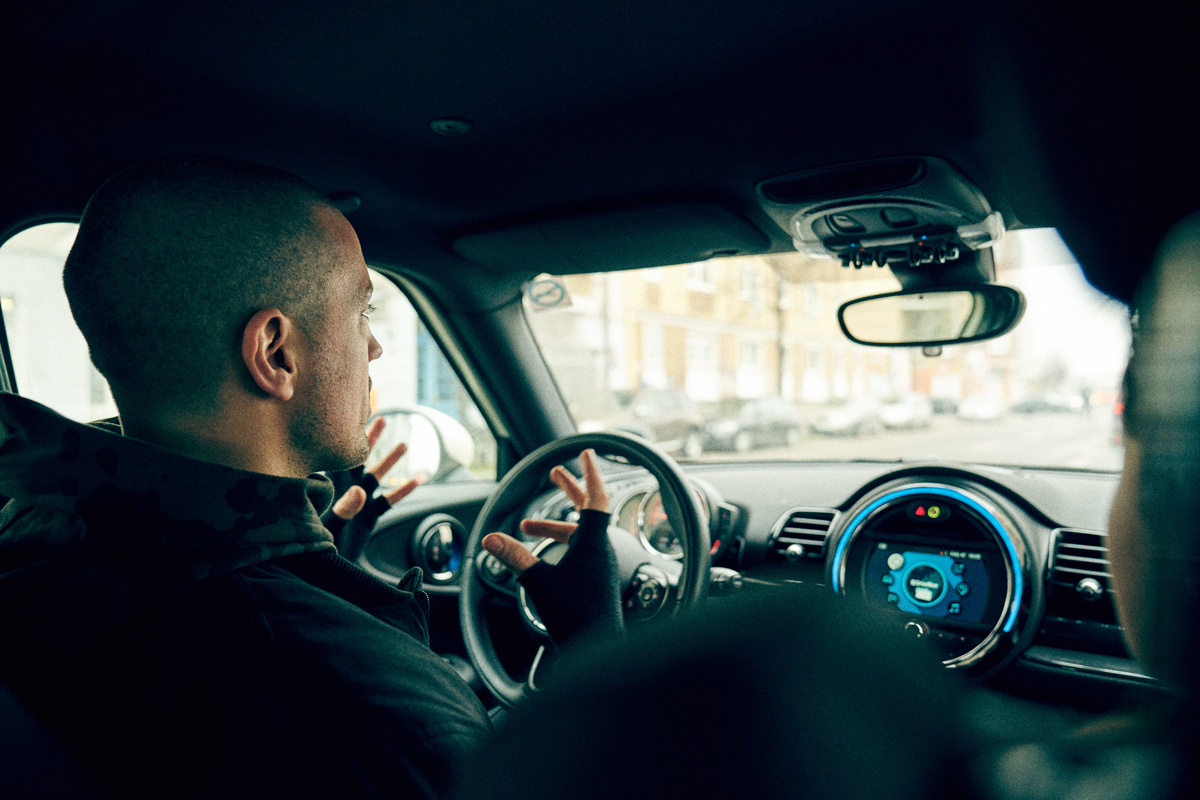 Veer’s tropes mine Tommy Four Seven’s skill at creating powerful, dark and deeply distorted musical and emotional soundscapes. It’s the same icy threshold that he’s been inhabiting in the output on his 47 label—which features releases from similarly-minded artists like VSK, Headless Horseman and Phase Fatale—in his Numerology bookings and in his more recently-released EPs. But Veer plunges into depths that his more dance floor-oriented releases do not. While tracks like “2084” and “Protocol 9” would certainly be appropriate for club play, many of the album’s other pieces, like “Feed”, “Neuromorph” and “Aphelion” are more challenging, noise-filled grinders that could also easily soundtrack a movie about the Earth’s impending doom.

So visual is his sound design that it’s impossible not to conjure images of Tommy’s fictitious dystopia while listening. It’s filled with swelling synth lines, dense layers of industrial percussion and brooding minor-key melodies that intertwine in delicate and seductive compositions. The two-minute mark in Veer’s opening track is possibly the most representative of the album’s overarching sonic and symbolic environment: a chugging metallic rhythm collapses into a wave of dissonant synths, broken beats and seemingly faraway electronics. “I wanted the opening track to set the scene and suggest a narrative which would pull the listener deep into my visual world,” he said. It’s an emotional sensibility that drove the feelings for the rest of the album, which sits squarely in his industrial-meets-broken techno wheelhouse.

Tommy worked extensively with his modular system for Veer, which he comically alluded to as “Eurocrack.” Many of his recent acquisitions directly inspired some of the tracks on the album, like the titular Make Noise Morphagene module which was used to generate the granular synthesis sounds in “Neuromorph”. “I use modular as a giant effects chain, and it’s really revolutionized how I’m making music,” he said. He also took unaltered beats and melodies, ran them through delays, cut them up and sampled them throughout the tracks on Veer. The dense, nuanced layers that he formed from collating each of these fragments produced a unique and eerie sound palette that informs the entire album. Tommy claims that he’s no synth “nerd or virtuoso;” the complexity and cohesion of each of the songs came instead from an innate vision that he had for the ways that each unique sample could be assembled and ordered into a large sonic work.

Even though he found success in the past on Chris Liebing’s CLR label, Tommy’s rapid recent ascent in the underground electronic music scene as an independent artist is due to an impressive amount of discipline and asceticism. In the years that have elapsed since Primate’s release, Tommy has become a very different artist. He has gracefully re-emerged into the techno world as a more avant-garde producer while maintaining popularity with a more informed mainstream audience. And in parallel with the evolution that he’s made with his own releases, he will be celebrating five years of his eponymous record label—designed and conceptualized by industrial techno icon Silent Servant—as well as two years of his Numerology series, which showcases the breadth of musical inspiration that can also be found in his own music. That many of the artists he books are still operating in the underground is no mistake; their status reaffirms his pursuit of a sound that is raw, genuine and untouched by the control of the larger Music Industry.

“The pressure of having a presence can sometimes take away from the music and from the enjoyment,” he said as we drove through Friedrichshain. “Luckily, that’s why the underground exists. That pressure defeats the purpose of the underground.” As he said this, we rounded the corner of Berlin’s Stasi Museum, whose looming facade eerily echoed our own conversation about the all-seeing eye that many promoters cast over artists’ Facebook, SoundCloud and Instagram pages. As with his own events, Tommy generally chooses to DJ for parties whose organizers’ ethos about booking policies and curation align with his own.

By the time we arrive at Vöner, we’ve visited Tommy’s apartment, his first studio space (across the river from Griessmuehle, many shots of which are pictured in this feature) and a number of quiet, meandering side streets that narrate his development—personal and professional—over the past decade. While he acknowledged to me that he likes to have fun, he also made it clear that his most urgently important focus, outside of veganism, is his marriage to his music. “I am super serious about it,” he said. “When it comes to music and DJing, that’s my number one passion.” His criticality shines through in Veer as it does with the rigor with which he’s overseen his various creative endeavors. If his most recent musical output is any indicator of his taste and artistic development, then it’s almost certain that his forthcoming projects will be his most complex and forward-looking yet.

Veer is out now on 47. You can buy a copy on Tommy Four Seven’s Bandcamp here. To see more of Yacoub Chakarji’s photos, check out his Instagram.